The December 2008 NPD figures are in, and this month represents the peak in terms of sales before a huge drop off that will occur in January. It’s still the same picture as December, with everything up by compared to November. You can read last month’s analysis here. The figures are from NPD, a marketing research firm that releases games console sale data every month.

The figures for US sales in December are below, ranked in order of number of sales (December 2007 figures also shown, including percentage change): 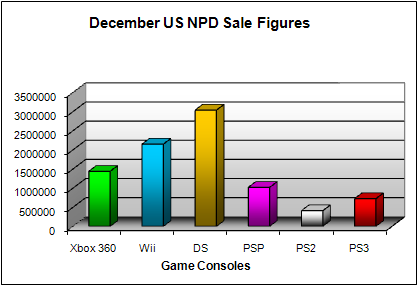 NPD Game Console Total US Sales Figures (as of December 2008)

My prediction last month was:

Steady as she goes, is my prediction for next month. I can’t see PlayStation Home, a beta at that, helping to sell too many PS3s, and with no price drops in view, I can’t see the current situation change much.

And that’s largely the case. The only “surprise” is that the DS managed to outsell the Wii, which isn’t all that surprising because that’s what happened at the same time last year as well. Once again, we see the PlayStation console numbers in red because sales dropped compared to the same time last year – that’s now happened in both November and December so it’s definitely a trend, rather than an outlier. The good news for Sony is that the percentage difference between last year and now aren’t as bad as last month, with both the PSP and PS3’s percentage drops in single digits. The PS2 continues its slide into oblivion though, selling at only 37% of last year’s numbers (which admittedly, were still quite strong).

More than 5 million units of Wii and DS were sold in December, which is simply amazing. Last year’s numbers were amazing enough too, at nearly 4 million combined, but the 3rd Christmas after the Wii’s release, it is selling even stronger. The greater sales numbers could be a sign that Wii manufacturing has finally caught up to demand, because availability over the previous two holiday periods was a major issue.

The Xbox 360 did well, and managed to outsell last year’s respectable numbers. It just missed out on outselling the PS3 by a 2 to 1 margin, by 12,000 units, but if you had told Microsoft earlier in the year that they would be selling neck and neck with the PS3, let alone nearly doubling it in sales, they would have taken it. Not quite pulling a rabbit out of the hat, because price drops are easy but you can only do it so many times, but the change of direction early on in the year to try and emulate the Wii’s success seems to have paid off.

The less said about the PlayStation brand the better for this month. Sony will hope that future price cuts and their 10 year plan will start to bear fruit this year, and I think it will (the price cuts especially).

Otherwise there’s nothing else to be said that I didn’t already say last month, so let’s get to the software figures. Wii Play has been selling amazingly ever since it debuted, and this month is no exception, except it’s now the number 1 selling software of the month. To be fair, Wii Play is at an advantage compared to all other titles, because it really is a must-have for the Wii, and not even because of the actual software either. The Wii is a multi player console, and so almost everyone need to buy another Wii Remote and Wii Play is the perfect way to do it. Other than this, Call of Duty: World at War continues to sell strong, just like this time last year when CoD4 was the top selling title. And pretty much all of last month’s top 10’s returned, except for Resistance 2 and Wii Music. Both titles are replaced by the “oldie” Mario Kart DS, which is a bit of a surprise. The new Wii Animal Crossing title also did well. The Wii won comfortably this month by taking 55.9% of all sales in the top 10, compared to the Xbox 360’s 31.6%, and only 6.2% for the PS3. Here’s the complete list of the top 10 software sales:

Next month will see a huge drop in terms of sales, which is part of the usual cycle. Stock availability could affect sales, and usually the better selling consoles will do worse in January compared to the lower selling ones that still have plenty of stock left. So if Wii, DS and Xbox 360 sales struggle, while PS3 sales improve in comparison despite no popular new games or price cuts, then this is one possible explanation.

Another blog post will be up soon which looks at the 2008  in review.

This entry was posted on Friday, January 23rd, 2009 at 5:26 pm and is filed under Nintendo Wii, Wii U, Switch, NPD Analysis, PS3, PS4, Xbox 360, Xbox One. You can follow any responses to this entry through the RSS 2.0 feed. Both comments and pings are currently closed.