The January 2009 NPD figures are in, and this month will usually see huge drops in sales due to the end of the holiday shopping period. The drop from the same time last year was even bigger due to stock shortages, but this year at least this problem should not occur as the console manufacturers have correctly predicted the booming sales that’s make all other industries jealous. The PlayStation brand has taken a beating in the last three months of figures, so with a new year, Sony will be hoping for good news. Nintendo will be hoping that the Wii did better this time than the same time last year, where stock issues meant very low sales. You can read last month’s analysis here. The figures are from NPD, a marketing research firm that releases games console sale data every month.

The figures for US sales in January are below, ranked in order of number of sales (January 2008  figures also shown, including percentage change): 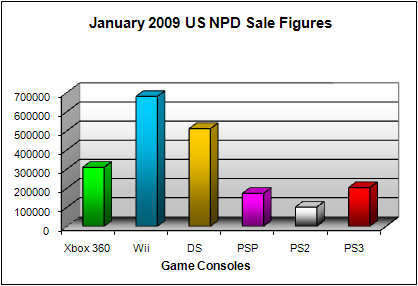 NPD Game Console Total US Sales Figures (as of January 2009)

Next month will see a huge drop in terms of sales, which is part of the usual cycle. Stock availability could affect sales, and usually the better selling consoles will do worse in January compared to the lower selling ones that still have plenty of stock left. So if Wii, DS and Xbox 360 sales struggle, while PS3 sales improve in comparison despite no popular new games or price cuts, then this is one possible explanation.

The reality pretty much panned out the same as the prediction, except stock shortages weren’t really an issue, unlike January 2008 (for the Wii, and at least according to Microsoft, for the 360 as well). This helped push the Wii, DS and Xbox 360 up compared to the same time last year, with Nintendo yet again able to pull of amazing 100%+ increases. The Xbox 360’s 34% surge, while less impressive, has establishes the console as the third most popular of all gaming systems in the US.

Again, it’s a month of “reds” for the PlayStation brand, with drops across the board. The PS2 aside, whose drop is understandable, the PS3 and PSP figures are obviously disappointing. The drop for the PS3 figures almost exactly matches up to the increase in Xbox 360 numbers, not saying that both are related, but that’s the obvious connection people will make. The PSP, at times competitive with the DS, is now completely outclassed. Sony might need to cut PS3 prices now not only to save the PS3, but also to save the PSP, which had a period of success last year when PSP integration features were improved on the PS3. I think there’s been enough said on what Sony need to do, and it’s quite obvious, but whether they can afford to do it or not, that’s another question. But it’s getting to the point where Sony can no longer not afford some actions, not if they want to ensure the PlayStation brand is the leader in gaming (probably too late for it this generation, but at the very least, ensure it’s not in last place).

Without stock shortages, both the Wii and Xbox 360 managed to sell in greater numbers than the same time last year, the Wii in particular. It is worth noting that none of the top 3 consoles, the Wii, DS and 360, have shown any signs of suffering from the economic meltdown that’s starting to affect almost all other businesses. It is also no surprise to find that these 3 consoles are the cheaper ones on the market, both by actual cost and long term value (availability of low cost games, etc.).  The Wii still hasn’t had (or needed) a price drop, even after 2 years of sales, and does not appear to need many new ‘must-have’ titles to maintain the momentum (if anything, it’s picked up). This makes the Wii very unique in terms of video game consoles, and probably electronic devices in general. The lower cost of making more and more Wiis will help Nintendo realise a profit even without having to sell any games, which again is unheard of in the video gaming industry.

Okay, enough with the Nintendo love-in. Let’s have a look at the software. Which means the love-in will have to continue, I guess. One of the best, if not the best, month for Nintendo as Fit, Play and Kart again dominated the software charts. The Xbox 360 took the next 3 spots – the charting Xbox 360 titles will usually point to the month’s newly released, and popular, multi-platform titles (or in the absence of such titles, last month’s new hit releases). Two Nintendo DS titles made it into the top 10, including a new Mario game which will always sell well (and brings backs some old memories), and also oddly the very old Mario Kart game again (is it becoming the “Wii Play” for the DS?). The last spot was taken by the Xbox 360 again. Nothing for the PS3, in fact, nothing other than one single entry for the PlayStation brand in the top 20 (that was for Call of Duty: World at War for the PS3 coming at 11). It seems that the better Nintendo does, the poorer Sony becomes, while Microsoft sells the most games to “hardcore” gamers. 61% of all games sold in the top 10 were for the Wii, 29% for the Xbox 360 and 10% for the DS. Sony gets a big fat zero for the first time since I’ve started tracking software numbers (since January 2008). Here’s the complete list of the top 10 software sales:

If last year’s stats are to be believed, then sales should pick up a bit for all concerned, but with stock shortages affecting figures last year and nothing like this right now, this might ring more true for the PS3 than the Wii/360. So my prediction would be a slight increase in PS3 sales, with lesser increases for the Wii and Xbox 360, but with the ordering of consoles remaining largely unchanged. It’s unlikely that the PS3 will outsell the same time last year, but it may have better luck in March when Killzone 2 may help in terms of hardware numbers (it’s late release in February won’t affect that month’s figures).

This entry was posted on Thursday, February 19th, 2009 at 4:52 pm and is filed under Nintendo Wii, Wii U, Switch, NPD Analysis, PS3, PS4, Xbox 360, Xbox One. You can follow any responses to this entry through the RSS 2.0 feed. Both comments and pings are currently closed.