Hello again. Yes, I’m still standing from my attack of the Shingles (hmm, title for new George Lucas movie perhaps?), although it was pretty bad earlier in the week. I got considerably better as the week went on, and I even had the energy to write a new guide for the newly released DivX Converter – the guide shows you how to make PS3/Xbox 360 compatible H.264/AAC videos using DivX Converter. It’s not the most feature rich encoding tool you’ll find, but if you need a quick and dirty H.264 encode, then it will do fine. Other than that, it was still a mostly quiet week.

On with copyright news, the makers of RealDVD are still feeling confident that they can beat the MPAA. The trial is set to start next month, and it will prove to be an important one. Real Networks do have a point in that their software actually adds more DRM to DVDs, and does not attempt to remove or circumvent any existing measures. There is a valid point in which the MPAA makes (shocking, I know) in relation to the CSS license, and whether Real are allowed to decode CSS in the way they’re doing, but on the point of copy protection, RealDVD doesn’t make the movie any easier to distribute online – in fact, it makes it harder and I can’t see how the MPAA can argue against this. To be fair, a sticker on the DVD telling me not to copy it is a stronger copy protection method that the weak CSS algorithm.

Only a couple of days until President-Elect Obama becomes President Obama. All eyes on the “change” that is supposed to be coming, and as posted last week, things are not looking great so far from a copyright perspective. However, things seems to be picking up on the Net Neutrality front and we might now get legislation to keep the Internet the way it is, as opposed to give control of it to big media and content owners.

In High Definition news, the economic crisis hits home this week as Circuit City closes its doors. Living in Australia, I have had no dealings with Circuit City apart from protesting their decision to support the defunct DIVX format (not to be confused with the DivX codec), as opposed to supporting DVD way back in 1998. But it just goes to show that nobody is immune, and Sony are especially exposed to the downturn due to their high costs in promoting both Blu-ray and the PS3. 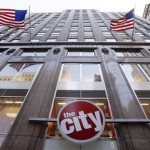 Circuit City has closed its doors

2008 has certainly been a year to forget for Sony, despite it getting off to a brilliant start. With the format war won, and PS3 sales beating the Xbox 360 back in February, things looked great. But then a couple of things happened (or didn’t happen), and Sony are now seen as one of the major losers of 2008. Blu-ray didn’t pick up as expected after HD DVD failed, and it has only now started to show it can hold its own against DVDs. In gaming, the Xbox 360 price cuts along with the never-ending Wii popularity meant that the only console the PS3 was able to beat was the PS2. And then the financial world collapsed, and all CE firms felt the impact, but especially Sony because they had two extremely expensive projects to support, both also facing serious competition from all over the place. Blu-ray seems to be standing on it’s own right now, although a lot of money is still being spent by Sony to promote it (see the Sony Blu-ray hardware promotions on Amazon.com). The PS3 still needs massive price cuts that will mean more losses for Sony in the short term at least. All they can do now is to keep their head down, take the loss and hope that in the meantime, the alternative media delivery systems and Nintendo/Microsoft haven’t taken control of the market by the time things improve. 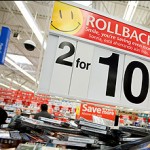 Cheaper and cheaper DVDs are causing headaches for studios

The point of Blu-ray was always to prop up dropping DVD profits, but it doesn’t seem to have worked. The latest figures show that Blu-ray and DVD sales combined dropped by 5.5% compared to 2007. This is despite Blu-ray posting a 178% increase in sales, because DVD sales dropped 7.3%. In my follow-up forum post, I broke down the numbers and worked out that for every $1 increase in Blu-ray sales, there’s a $5 drop in DVD sales. The problem is that even though each Blu-ray makes more money, every cent someone spends on Blu-ray automatically means less money spent on DVDs. People are not buying the same movie on both DVD and Blu-ray, and why would they? And while Blu-ray movies are more expensive than DVDs, this does not always translate into more profit, after higher manufacturing costs plus promotional costs are factored in. Another problem is that Blu-ray movie pricing are dropping as well, along with DVDs, and so people are getting more for their money than before – so they’re naturally spending less because one can only physically watch so many movies in a time period. If I can now buy 10 movies a week instead of one due to price drops, then I might not buy 10 movies and spend the same amount of money because I don’t think I can watch 10 movies in a week. And once people get a taste for cheap movies, they are less likely to buy more expensive ones, even if it offers better quality. They’ll just end up spending less and less, and this is exactly what the studios are trying to prevent. The solution? I think they have to make it more convenient to search for and get movies into people’s homes. If that means promoting online purchasing and instant delivery, like how MP3s have taken over from CDs, then so be it. Blu-ray is just too similar to DVDs and while this familiarity is great for getting people to adopt the format, it also means that same problems that DVDs have are not solved. At best, it will buy some time for the industry to come up with a new way of doing things, but as the sales figures show, it’s not really helping much at the moment.

Or instead of going with the new, how about going with the extremely old? Panasonic thinks they’re onto a winner by combining good old VHS with Blu-ray. Seems a bit wrong to me, to be honest, a bit like still including a floppy drive with your latest i7 computer, at least one without a multi-card reader.

And finally in gaming, Microsoft says they don’t plan on releasing a new console anytime soon. They can still do a bit to improve the Xbox 360, which can still play games that offer excellent quality visuals, although any recent PC can beat it for graphics these days. Two words Microsoft, ‘cool’ and ‘quiet’ – make these two qualities of the Xbox 360, and you really won’t need to release a new console in the short term.

3D is a big thing at this year’s CES, and Sony promises PS3 3D gaming. But wait, aren’t most PS3 games already 3D (or 4D, as Sony’s PR department claims)? No, these are actual 3D games where you wear those headache inducing glasses. This reminds me of the Asus VR-100 3D gaming system for the PC, and I nearly got one of those back in 1999. I’m all for immersion, but the Wii can do it with a $5 piece of equipment. And no headaches. 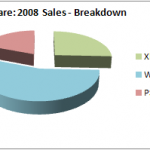 A sneak preview of one of the graphics in my 2008 review: hardware sales numbers

I should have the NPD figures for December 2008 up next week – it’s slightly delayed because I’m also writing the year in review which will feature lots of nice graphs. I probably shouldn’t tell you the conclusion before I publish the article, but I think it’s fairly easy to guess what it is anyway. The Wii is the big winner, obviously. It was twice as popular as the Xbox 360, which itself was almost twice as popular as the PS3. Nintendo is the even bigger winner because the big software hits were theirs (thanks to Super Smash Bros. Brawl, and the usual suspects of Wii Play, Mario Kart and Wii Fit). The Xbox 360 game developers were the other big winners. There was only the single PS3 title in the yearly top 10, and that was the PS3 version of GTA IV which sold 1.4m copies less on the PS3 than on the Xbox 360. Nine out of the twelve monthly number one games were Xbox 360 ones, two were Wiis, and only a single number 1 hit for the PS3 (MGS4).

Okey dokey, that’s it for this week. Hope 2009 has been pleasant for you so far, because it hasn’t really been that great for me thanks to the varicella-zoster virus. Curse you, stupid virii.

This entry was posted on Sunday, January 18th, 2009 at 5:44 pm and is filed under Computing, Copyright, Electronics, High Definition (Blu-ray/HD DVD/4K), News Roundup, Nintendo Wii, Wii U, Switch, PS3, PS4, Video Technology, Xbox 360, Xbox One. You can follow any responses to this entry through the RSS 2.0 feed. Both comments and pings are currently closed.