The November 2008 NPD figures are in, and this has been a bumper month for game console sales, breaking some records in the process. The overall picture is pretty predictable though, but still, some of the numbers are simply amazing, especially given how soft the retail sector is supposed to be right now. You can read last month’s analysis here. The figures are from NPD, a marketing research firm that releases games console sale data every month.

The figures for US sales in November are below, ranked in order of number of sales (November 2007 figures also shown, including percentage change): 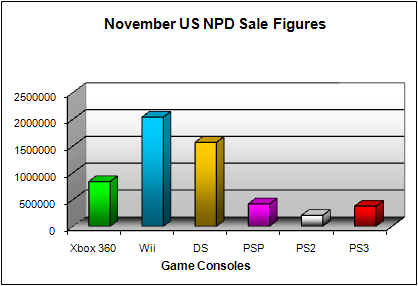 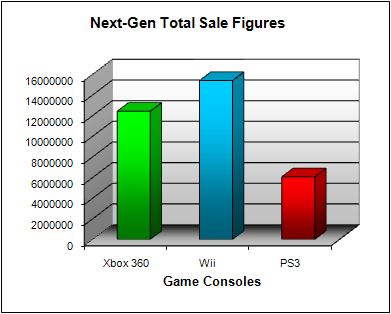 NPD Game Console Total US Sales Figures (as of November 2008)

My prediction last month was:

No big surprises next month, I don’t think, so I won’t even bother making a prediction. Same as before. Which I guess is a prediction of sorts.

There weren’t any big surprises in the order of most popular consoles, compared to October, but were a few big surprises. Some very good, some just good and some that’s quite bad.

Let’s start with the very good, and just look at those Nintendo numbers. Wow! I’ve included November 2007’s sales figures as well for comparison reasons, and Wii sales grew a massive 108%! That’s right, it doubled in sales and then some. The DS did less well, but still maintained last year’s amazing numbers. That makes the Wii the most wanted device of the holiday period three times in a row now. To compare how amazing selling more than 2 million Wiis is, less than 4 million Blu-ray players were sold in the entire 2008 period! So the Wii sold more in one month than Blu-ray in six, even though Blu-ray players are now dropping to prices below that of the Wii.

Then we have the less excellent, but still good surprise and that’s the Xbox 360 managing to outsell the same period from last year by 9%. That may not sounds as good as 108% (!), but the Xbox 360 started the year very badly and it looked like this was going to be the year that the PS3 spanked the 360, but then with a few strategic price cuts, the NXE, some hit games (see below), it fought back extremely well. The Xbox 360 is quickly establishing itself as the current-gen console of choice for “serious” gamers (and by serious, I mean those that have probably more than one console at have, have owned a previous-gen console, and those that actually care about the fact that the Wii is not HD). Well maybe not the console of choice, that’s a bit early to tell, but at the very least, it’s in with a shout, which is more than what you can say for the original Xbox. Microsoft will be pleased, no doubt, because they know they’re not really competing with the Wii – they’re competing with Sony’s PS3.

And of course, there’s always a chance of a bit of bad news. Unfortunately, all 3 pieces of it came Sony’s way this month. Compared to the same time 2007, all 3 of Sony’s gaming devices dropped in sales. And they weren’t just superficial drops, but significant ones – 19 (PS3), 25 (PSP) and a massive 58% of the PS2. The Sony “eco-system”, to borrow the term from Microsoft, isn’t look too healthy. Of course, this is just a month, and we’re comparing current-gen consoles to a previous gen one (PS2), as well as two other “premium” (read: expensive) alternatives to other similar devices, and you don’t need to be a rocket scientist to know that expensive stuff sells less as well than cheap stuff in harsh economic times. What is worrying is that, for the PS3 at least, it wasn’t even able to maintain last year’s sales figures, despite prices dropping, value increasing, and Blu-ray now selling 4 times as many as last year. That’s negative growth, a recession, if you will. And to let your main rival, the 360, sell twice as many console as you do in the crucial holiday sales period, that’s just not good enough. Especially if it’s because you decided to release an even more expensive SKU (the 160GB) when people want value, not features. PlayStation Home, a beta just released a few days ago (why still beta? It’s been in the works for years!), will help, but then again LittleBigPlanet was supposed to help as well, and it didn’t, falling completely off the sales charts this month (see below).

I don’t want to keep going on about it, especially when everyone else is doing so as well, but having a Blu-ray drive in the PS3 seems like a mistake, at least from the console war point of view. It has helped Blu-ray win the format war, but the other Blu-ray manufacturers are now not happy about the PS3 being the Blu-ray player of choice, and Sony may have to keep the PS3 prices high to placate them. And do games really need Blu-ray? Probably not this generation, especially if you look at all the hit games that have managed to say under 8 GB. I still think a Blu-ray drive would have made more sense in the PS4, and perhaps the PS3 could have had different SKUs that had built in Blu-ray drives for movie playback (only), while the mainstream version is cheap and uses good old DVDs. This would still help Blu-ray in the HD format war, but no hinder the PS3 in the console war. Sony’s hope is that the PS3 will remain competitive and become the PS4 due to software updates and other innovations, which I guess is not all that unrealistic and perhaps their big plan all along. We’ll have to wait and see if this works, because Microsoft can come out with a Xbox 720 or whatever, with Blu-ray playback and the “sexiness” of the PS3 probably for cheaper, and then Sony is back to square one.

Now let’s look at the software sales charts, and the very good surprise here is for Microsoft. The number one and number two titles all belonged to the Xbox 360, selling a combined of nearly 3 million copies, that’s more than 1.2 million more than GTA IV, this year’s best selling game. That’s especially good for Microsoft because one of these titles, Call of Duty: World at War, is actually a multi-platform release, meaning they are winning in an area that counts for game developers when they decide how much effort each multi-platform release will get. To compare in more detail, the PS3’s best selling game this month was also CoD: WaW, but it was outsold by the Xbox 360 version by a 2.3:1 margin.  That’s even more amazing when you consider that for hardware numbers, the Xbox 360 only outnumbers the PS3 by 2:1 – so this shows that Xbox 360 gamers buy more games than PS3 owners, and games is where the money is at. And CoD: WaW is actually more expensive on the Xbox 360, at least on Amazon. The number 1 title was of course Gears of War 2, a Microsoft exclusive, which is great news for Microsoft’s game developers as well. Sony’s response to Gears of War was Resistance, and the sequel to that hit game was also released this month, making it the other PS3 game in the top 10, but selling considerably worse than GoW2. Both are exclusives to the platforms, and one sold 4 times as many as the other with only twice as many consoles. And where’s LittleBigPlanet? In fact, even the other Xbox 360 exclusive, Left 4 Dead, outsold Resistance 2. Left 4 Dead is developed by gaming giant EA, but no PS3 version was produced. The Nintendo hits are still all there, with Wii Music creeping in at number 10. All they need is a Wii Sports 2 and they will lock up a huge share of the software charts for a long time to come. Overall, the Xbox 360 held 46.5% of the top 10, the Wii closely behind at 40% while the PS3 lags behind at 13.5%. Here’s the complete list of the top 10 software sales:

And that’s it for another month. Steady as she goes, is my prediction for next month. I can’t see PlayStation Home, a beta at that, helping to sell too many PS3s, and with no price drops in view, I can’t see the current situation change much. The next time you read this feature will be 2009, and I will try to have a 2008 summary up as part of this feature, or another blog post. It should be interesting to find out who had the most number 1 releases, who sold the most hardware and software, and all sorts of other stats. See you then, and have a happy and safe holiday period.

This entry was posted on Monday, December 15th, 2008 at 4:23 pm and is filed under Gaming, Nintendo Wii, Wii U, Switch, NPD Analysis, PS3, PS4, Xbox 360, Xbox One. You can follow any responses to this entry through the RSS 2.0 feed. Both comments and pings are currently closed.