We now have the figures for December, the busiest time of the year traditionally for video game sales. With the economy the way it is, the PS3 Slim and price cut led charge by Sony, and the up to this point fairly disappointing year for Nintendo, all eyes are on the final month of 2009 to see where we are in terms of the industry. The figures are from NPD, a marketing research firm that releases games console sale data every month.

The figures for US sales in December 2009 are below, ranked in order of number of sales (December 2008 figures also shown, including percentage change): 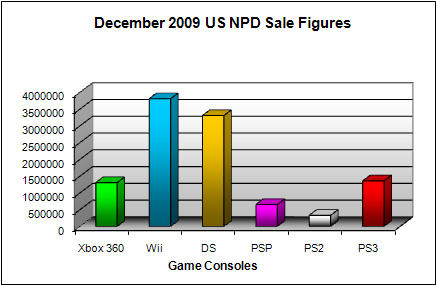 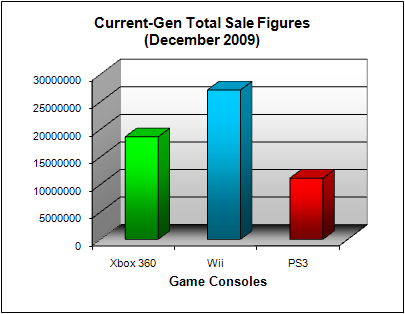 NPD Game Console Total US Sales Figures (as of December 2009)

December hardware sales should be even higher than November’s based on past trend, but with MW 2 still selling in good numbers, it should help the Xbox 360. But I suspect it will be a closely fought race between the Xbox 360 and PS3 for the third place finish, behind the DS and Wii at first and second. Software wise, MW 2 should still be selling well, and should hold top spot, although Wii Fit Plus may make a surprise surge. But in all likelihood, both versions of MW 2 will probably beat New Super Mario Bros. Wii to furnish the top 3 spots. Overall software sales will be down, because it will be hard to beat this month’s figures.

The race between the PS3 and the Xbox 360 was indeed a close one, but one that the PS3 ultimately won, albeit by only a couple of percentage points (the PS3 had 12.62% of the console market, the Xbox 360 had 12.15%). The demand for Blu-ray was obviously higher than the demand for Modern Warfare 2, which did not do as well as I expected, or more precisely, other titles managed to break even more records. And by other titles I mean Wii titles. The Wii is the success story for December 2009, and reversed the trend for the entire 2009 in a single month. It was this hardware led surge by the Wii that helped several Wii titles, the ones that every Wii owner seems to have (and the ones that new owners must buy), that also helped Wii software to surge, taking the top 3 spots comfortably. This is why the second part of my predictions, the software based ones, proved largely to be incorrect, and I, and many others, underestimate the demand for the Wii (yet again, it seems, for another holiday season).

To highlight just how amazing and how against the trend the December Wii numbers are, here are some stats:

And when you add in the amazing DS numbers, which also recorded year on (record) year growth, it seems Santa managed to bring a big gift for Nintendo, and exactly when they needed it as well.

Of course, the other success story for the second half of 2009 has been the PS3. The price cut and the PS3 slim has revitalized the console when it looked like coming a distant third in the home console wars for this generation. While there’s nothing to suggest the PS3 will dominate like the PS2 of the previous generation, not if Nintendo can do anything about it, but there are signs that it might yet beat the Xbox 360 given enough time. The increasing popularity of Blu-ray, and more importantly, the lower price of the PS3 (which makes it once again able to compete with standalone players, something that it couldn’t do in the first half of 2009), has helped it overcome the Xbox 360’s Modern Warfare 2 led hardware surge. The year on year growth figure of 87% is amazing, but probably more amazing than it actually is, considering how badly the PS3 was selling this time last year (behind the PSP, and half of the Xbox 360). If anything, the PS3 is only starting to sell at the levels that many had expected at this stage of its lifespan, and it had been seriously under performing before the recent changes.

With Nintendo sitting happy at the top, and the PS3 jumping over the Xbox 360, Microsoft might be worried, and they probably are. But that’s only because of the previous successes of the console, making the current numbers, which Microsoft would only have dreamed of at the launch of the console, seem so disappointing. Nobody expected the Xbox 360 to stay ahead of the PS3 for very long after the PS3 launches, not even Microsoft and not after all the RRoD problems. But while monthly sales have only started to lag behind the PS3, it still holds more than a 7 million lead over the PS3 on the console front, and that lead should last for a while yet at the PS3’s current growth rate. And, Microsoft will hope, that when Natal is out at the end of the year, it will give the console enough momentum to see out the rest of this generation, although it will have to ride out 2010 and hope that Sony doesn’t catch up too quickly.

In any case, December 2009 was an excellent month for gaming, the best ever in fact, and managed to easily beat the record breaking December 2008 largely thanks to Nintendo (and with Sony finally doing as well as it’s supposed to). The top 10 game sales also managed to beat the top 10 of December 2008, but 2009 still marks a largely down year compared to 2008. As mentioned previously, the Nintendo Wii surge helped Wii games to dominate the top 10 charts as well. The average new Wii buyer will almost always buy one or all of the following “must-have” titles: Wii Play, Wii Fit (Plus), Mario Kart and the new Wii Sports Resort – and all of these managed to get into the top 10, even if some have been missing from the list for most of 2009 due to lackluster hardware sales. The other consoles don’t really have these kind of must-have games, mainly because that Wii games age much better than their PS3 or Xbox 360 counterparts. Many still say the best title on the Wii is still the bundled Wii Sports, and it’s hard to imagine a game of this age on the Xbox 360 or PS3 that is still played as often. The Xbox 360 version of Modern Warfare 2 fell from the previous month’s record high to something that’s still quite respectable for a month old game, still selling above the PS3 version but by not as much since the PS3 version’s fall was less dramatic. This now means that almost one in three Xbox 360 owners now have a copy of Modern Warfare 2, which is simply amazing (it’s just over 1 in 4 for the PS3, which is still amazing, especially considering that not everybody likes shooters). MW2 was the only PS3 game in the top 10 though, but the Xbox 360 had two more. Assassin’s Creed II sales on the Xbox 360 nearly didn’t drop at all coming into the second month of release, and the semi platform exclusive Left 4 Dead 2 also recorded similar sales figures as last month. Overall, Wii games dominated with 64.6% of the top 10, with the Xbox 360 getting 22.6%, and the PS3 with 8.1%.

January should see huge sales drop across the board, but that’s just a seasonal thing. And as such, it’s very hard to predict the order of things, although I believe the hardware sales ordering will remain the same. On the software front, January will be largely quiet, Mass Effect 2 on the Xbox 360 should do well, and the rest of the top 10 should have a familiar look to December’s. There are some big releases coming in February and March, so consumers can take a breather in January (and save up).

I should say “see you next month” as I usually do, but I will also have a 2009 year in review up in the next week or two, which will go through and summarize the stats for 2009, similar to what I did for 2008 around this time last year. So see you until then.

This entry was posted on Friday, January 15th, 2010 at 7:08 pm and is filed under Nintendo Wii, Wii U, Switch, NPD Analysis, PS3, PS4, Xbox 360, Xbox One. You can follow any responses to this entry through the RSS 2.0 feed. Both comments and pings are currently closed.