Now that the December 2008 NPD figures have been made available, and I have posted the analysis, I have now covered a complete year in terms of NPD figures and so it’s fitting to now take a look at 2008 through the NPD figures, but mainly concentrating on the Xbox 360, PS3 and Wii.

The total hardware sales figures for 2008 are as follows:

This is a breakdown of these numbers, for the Xbox 360, PS3 and Wii: 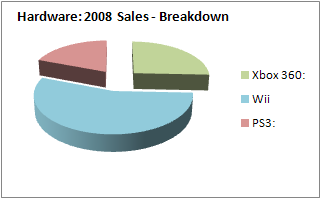 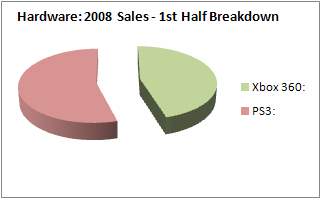 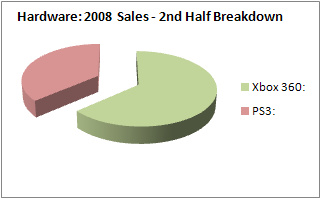 Quite a turnaround for the Xbox 360 and the PS3. PS3’s slight lead in the first half of 2008 turned into a big deficit in the second.

Now let’s look at game sales. Looking only at the monthly number one titles, here there are: 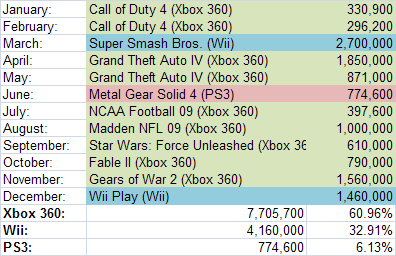 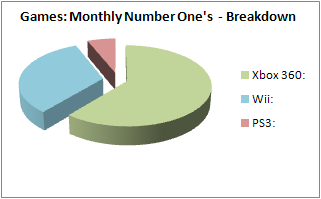 The ‘sea of green’ will make Microsoft very happy indeed, although the Wii did very respectably with only two entries out of 12. Sony will be disappointed that Little Big Planet and Resistance did not take the number one spot. And with their only number one title occurring in the first half of the year, it further underlines the loss of momentum in the second half.

But only looking at the number one titles don’t really tell us all that much. By extending it to the top 10, we then have the following breakdown in terms of the number of titles sold for each format: 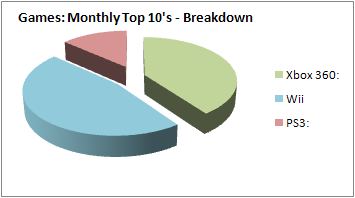 Nintendo’s domination is now showing up, because Wii Play, Wii Fit and Mario Kart always makes the top 10. The Xbox 360 is still holding on admirably, and the PS3 is doing better because it is now managing to get one or two titles in the top 10 (but as mentioned before, only once at the number one spot).

But even just looking at the top 10 doesn’t give us a whole picture of the actual top 10 for the year (just the ones that made it to the top 10 for each month, so a game that’s number 11 for all 12 months might actually turn out to be the number one selling game of the year). Luckily, NPD provided the 2008 yearly top 10, and here they are: 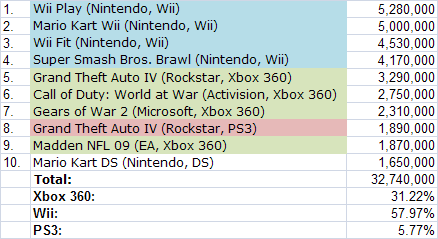 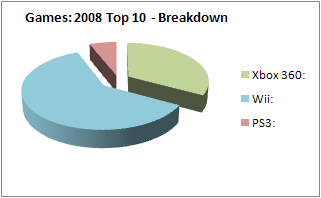 The Wii domination is now fully showing, with the top 4 titles all Wii ones, but unfortunately for third party publishers, they’re all Nintendo titles. The second half of the table is dominated by the Xbox 360, but this time it’s better news for publishers as there’s only one Microsoft title (and that was actually Epic Games’). The poor showing for the PS3 continues, with only a single title in the top 10, Rockstar’s Grand Theft Auto IV (previously a PlayStation timed exclusive), a multi-platform release that was outsold by the Xbox 360 version by nearly a 1.7 to 1 margin.

So that’s 2008 in charts and graphs. Nintendo for the Gold, Xbox 360 for the Silver and the PS3 for the Bronze.

This entry was posted on Friday, January 23rd, 2009 at 6:23 pm and is filed under Nintendo Wii, Wii U, Switch, NPD Analysis, PS3, PS4, Xbox 360, Xbox One. You can follow any responses to this entry through the RSS 2.0 feed. Both comments and pings are currently closed.