I know I know, a 2008 Game of the Year post when it’s already April? Surely, this must be an April Fools thing. Sadly, it’s not. While there’s only 2 months and a bit left before it is officially closer to 2010 than 2008 (may not be true, my calendar maths is bad), it’s never too late to look back at 2008 and see which games Digital Digest users thought were the best of the year. Or maybe it is too late, who knows.

Anyway, at the start of February, I started a poll on the best game of 2008. Why as late as February? Because the 2008 NPD video game sales analysis was only posted a couple of days earlier, and so with that information, I was able to compile a list of “nominated” video games for the poll – add a few more PC games, and the list was complete. The polls have closed (well not really, but it’s off the front news page anyway), and so here are the results: 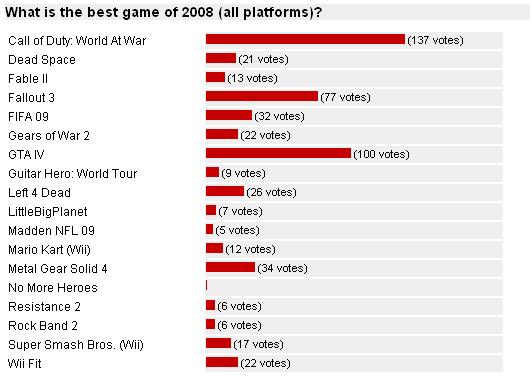 2008 Game of the Year Poll Results

While I’m obviously disappointed that Fallout 3 was not game of the year, I think the results are fairly sensible.  Call of Duty: World at War was first place by quite a bit, followed by the year’s most hyped up release, GTA IV. Fallout 3 came a respectable third, and it’s understandable because RPG are not everyone’s cup of tea (it certainly wasn’t mine until fairly recently). All top 3 games are multi-platform releases.

Honorable mentions goes to MGS4 for the PS3, FIFA 09 (the best FIFA in quite a while), and Left 4 Dead. Dead Space, Gears of War 2 and Wii Fit fall into the “average” category, despite these games selling quite a lot in numbers. No More Heroes got no votes, while other titles, like LittleBigPlanet and Guitar Hero: World Tour, were just as disappointing again despite selling in good numbers.

So what does this poll tell us? Not much. 2008 was a great year for games though, and I don’t think any of the games I’ve picked for the poll can be considered “bad”, despite the votes. Hopefully, 2009 will be just as good.

This entry was posted on Wednesday, April 1st, 2009 at 5:53 pm and is filed under Computing, Gaming, Nintendo Wii, Wii U, Switch, PS3, PS4, Xbox 360, Xbox One. You can follow any responses to this entry through the RSS 2.0 feed. Both comments and pings are currently closed.