December is traditionally the biggest month in terms of game console sales, and December 2007 was not exception. The numbers have come in, and they round off an amazing year of growth for the gaming industry, despite the heavy competition (perhaps the high definition people can learn something from putting consumers first and still be able to win regardless of competition). You can read last month’s analysis here. The figures are from NPD, a marketing research firm that releases games console sale data every month.

The figures for US sales in December are below, ranked in order of number of sales: 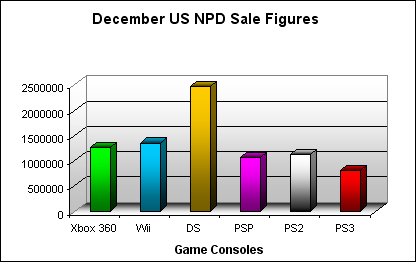 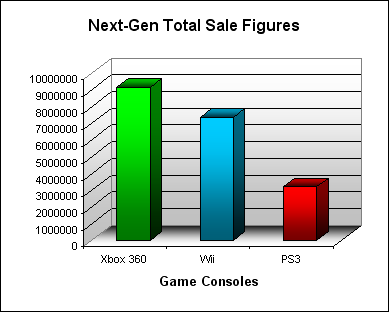 So a bumber month and year for the gaming industry. Good for them, because they’ve managed to be competive (format war), while not forgetting that their primary audience is not game developers or distributors, but the actual gamers themselves. Just look at all the great and original games released in 2007, not to mention some new and innovative hardware in the form of the PS3 and Wii (notable mention to the Xbox 360 as well, although it really was the innovation of 2006, but it has stood the test of time well despite the well known hardware problems).

Another great month for the Wii, and as we all know if stock wasn’t an issue, the figures would be much higher. The Xbox 360 continues to sell well despite competition from the Wii and the now lower priced PS3. And while I have not covered it here, the 360 has three of the top 10 selling games of 2007, including the number one Halo 3 and the December number one Call of Duty 4 (and it seems readers of Digital Digest agree as well). What is more encouraging for Microsoft is that the other two top 10 titles were multi-platform releases that were also available on the PS3. The PS3, on the other hand, did not have a single title in the December and annual top 10 list, although the PS2 did have three titles in the annual list too. Which brings us to the PS3 – December was a great month for the console as it nearly doubled the last month’s results, which in itself was a quadrupling of the October results. But at this point, the PS3 *has* to sell well since it’s still trying to find some market share due to it being a relatively new console. The results are encouraging, although probably not as good as Sony had hoped (while the PS2 results were probably better than they expected – the PS2 to PS3 upgrade path does not seem to be tread as often as Sony likes). This month’s next-gen sale percentages show that the 360 held 37% of the next-gen market (up from 34.7% last month), the Wii with 39.6% (down from 44.3%) and the PS3 rose to 23.4% (up from 21%). This appears to suggest that both the PS3 and Xbox 360 made gains at the disadvantage of the Wii, and the 360’s near 40% share will be good reading for the people at Redmond. Total sales figures to date suggests the Xbox 360’s lead has shrunk to 46.5% (down 2%), with both the Wii (37.3%, up 0.5%) and PS3 (16.2%, up 1.5%) gaining. This is probably to be expected as the Xbox 360 was on the market a year earlier, and it’s natural for the other consoles to now slowly take back their share of the market. The question is when will the percentage settle down, and what will the market look like then … but this might take another year or two yet.

The portable market was again dominated by the DS. The previous month’s impressive 73/27 split has now increased to 77/23 for Nintendo. With these impressive sales figures, one wonders if Microsoft will join in and release their own handheld.

This entry was posted on Friday, January 18th, 2008 at 5:53 pm and is filed under Gaming, Nintendo Wii, Wii U, Switch, NPD Analysis, PS3, PS4, Xbox 360, Xbox One. You can follow any responses to this entry through the RSS 2.0 feed. Both comments and pings are currently closed.