So a week and a bit more back from vacay, and what happens? I get the flu, or some hideous mutated version of it. Eurgh. So this week’s WNR is going to be a bit more abbreviated than usual, since it’s very hard to type legible words when you’re coughing and sneezing at the screen all the time.

The RIAA has a new target in its sights …

While this humble webmaster has difficulty writing coherent sentences, the RIAA apparently doesn’t have the same problem, as the copyright lobbyists for the music industry have written yet another letter (after writing one to CBS/CNET last week), this time to BitTorrent Inc, the makers of uTorrent.

The RIAA wants the company that developed the BitTorrent protocol to do more to fight piracy, which may includes building in a filter system for its popular uTorrent client in order to filter out pirated downloads. The RIAA’s letter cited all sorts of stats, all of which basically points to there being lots of piracy going on via BitTorrent. But in classic RIAA style blame shifting, they claim that BitTorrent Inc is somehow responsible for this.

BitTorrent Inc did invent the BitTorrent protocol, and they do publish one of the most popular BitTorrent clients out there, but at the end of the day, it’s just a file transfer protocol. HTTP is also just another file transfer protocol, and there’s a lot of pirated files being transferred via HTTP too, and downloaded via the most popular browser on the market, Google’s Chrome. This does not, however, mean that Tim Berners-Lee/CERN and Google should be made responsible for this, even if the ratio of legal/pirated content may be less of an issue on HTTP than on BitTorrent.

None of this finger pointing, whether at BitTorrent or CNET, actually addresses the question of why people pirate. And the answer to this question is a lot more complicated than “because they’re thieves” (especially when some the same “thieves” are also their best customers).

Microsoft’s ominous user policy changes may be a storm in a teacup, or something more sinister

Meanwhile, Microsoft is trying to make it less easy to “steal” games with an updated user agreement that apparently gives the Redmond firm the power to scan and disable “counterfeit games”. After our article on this was published, Microsoft issued a clarification that the newly added clause was mainly for security reasons, to allow Microsoft to remove “apps or content” whenever the company “deems your security is at risk”. I don’t know about you, but this statement seems even more ominous to me, especially the part about Microsoft affecting my “content”. Not to mention the fact hat security was not mentioned anywhere in the updated clause either.

One company that wish it had the legal authority and technical ability to disable content right now is Avid Life Media, the company behind Ashley Madison. The site’s data was hacked, posted online and exposed many who used the service to cheat on their partners. ALM is now using copyright law to try and remove the leaked data from online postings (sponge, a flood, trying to stop, etc…) – good luck with that!

What do I make of this whole situation? I guess it’s easy to sit here and laugh (plus cough and sneeze uncontrollably) at cheaters getting what they deserve, but the bigger issue for me is about the right to privacy. Those who cheat on their spouses may deserve the worst, but they may also have an expectation of privacy that we have to respect. Or do they give up this right because online data is well known for not being secure, and that users need to re-adjust their expectations as a result? This is something that I think deserves further debate.

Another month, another NPD, and the PS4 once again beat the Xbox One, both in hardware and game sales. I think it’s safe to say that this will be the ongoing trend, and it’s probably not even worth mentioning NPD results unless something changes from this norm. 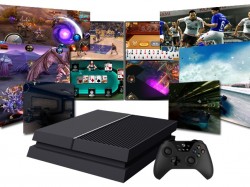 It looks like the real deal, but don’t expect to play Call of Duty on this console

You might think all these monthly wins for the PS4 would be seriously depressing for the Microsoft camp, but it’s worth noting that the Xbox One is still selling better than the Xbox 360 at the same stage of their life-cycles. So it may be the case of the Xbox One being an excellent console, but up against an even better one in the PS4. The real losers in this generation, if the Wii U can even be considered to be in the same generation as the XBO/PS4, is Nintendo.

But what if you could combine the Xbox One and PS4 into the same console? Meet China’s OUYE, which rips off the outer casing of the PS4, rips off the Xbox One’s controller, and rips off the name and concept of Android microconsole OUYA. Note that Chinese company responsible for this monstrosity didn’t even bother to try and rip off the Wii U. Ouch.

67 coughs, 32 sneezes later, we come to the end of this WNR. Oh I’m sure there will be more news next week, but whether I’ll be healthy enough to write them up is another matter. Eurgh.

This entry was posted on Sunday, August 23rd, 2015 at 5:30 pm and is filed under Copyright, Gaming, News Roundup, Nintendo Wii, Wii U, Switch, NPD Analysis, PS3, PS4, Xbox 360, Xbox One. You can follow any responses to this entry through the RSS 2.0 feed. Both comments and pings are currently closed.