Welcome to another edition of the WNR. NPD “released” its July 2012 sales stats for US video game sales, but unfortunately, only Microsoft again chose to divulge its hardware sales stats. So no July NPD analysis, which is a shame, but there wasn’t any real surprises anyway. I’ll talk a bit about it in the gaming section below.

Another pretty full news week, so let’s get started …

So much for “do no evil”. Google gave in to the demands of the MPAA and the RIAA this week by signalling it is ready to start self-censoring its own results to reduce the visibility of alleged piracy websites. Without going as far as removing suspected websites, Google will start demoting any website that receives an unspecified number of DMCA notices.

It’s own YouTube website, and “major brands” will apparently be exempt from this new rule (webmasters have long suspected there’s one rule for the web top 100, and another rule for the rest), but the rest will now have to live in fear of the system, which is already being massive abused by those seeking an unfair advantage (57% of all filed notices, according to a Google report from 2006), and made even more attractive as a “black hat” weapon of choice now that the entire domains of competitors can be demoted. Since Google started releasing DMCA stats, the number of DMCA notifications has risen from about a million per month, to now over 4!

Except none of this will work to stop piracy, because people aren’t turning into pirates just because they see some links to The Pirate Bay on Google. I don’t know if it’s naivety, a head in sand attitude, or a deliberate attempt to muddy the waters, but the idea that good, people are being fooled and misled into downloading pirated content online is, to put it simply, hogwash. People pirate and they do it willingly, and knowingly. And they spent a lot of effort learning and honing their piracy skills. They will most likely alredy have go-to places to get their piracy fix, or custom search engines that does more work separating the wheat from the chaff, so the idea that they’re all relying on Google to find the S01E08 of The Newsroom is simply a fantasy.

But despite Google’s proactive steps in reducing piracy, the MPAA/RIAA still wants more. In a joint submission to the US Copyright Czar, the MPAA and the RIAA have called on the government to do even more in the CRusade Against Piracy (CRAP™), including going all “Megaupload” on websites like The Pirate Bay. Basically a wish-list and a preview of what the copyright landscape could be like if the MPAA/RIAA get their way, the submission also talks about increasing criminal sentences for copyright offences, including making the unauthorised streaming of videos a felony.

Showing that they’ve not quite given up on SOPA/PIPA, the submission also calls for tighter control of domain names, including those outside of the jurisdiction of the US government. The groups also say that the government needs to go out and threaten private businesses like domain name registrars, search engines, and advertising agencies and get them to fall in line with the MPAA/RIAA’s vision of copyright enforcement. So it’s simply not good enough for Google to only demote websites that have yet to be proven, in a court of law at least, of doing anything wrong – no, the MPAA/RIAA says search engines like Google must “delist rogue sites”. Note the use of the term “rogue”, the same type of language that’s also being used to describes countries like North Korea and Iran, and I don’t think this is a coincidence either.

Feeding into the paranoia and hysterics that aims to paint college kids downloading movies as something much more serious, the MPAA/RIAA also strategically brings “organized crime” and “gangs” into the equation in this submission. But as far as I know, Tony Soprano purchased his copy of The Godfather, and it may be just me, but I just can’t imagine the Crips and the Bloods getting into the torrent search engine business.

The wait is finally over. The kind people at Fox studios have finally allowed their customers to buy Avatar on Blu-ray 3D, for a price that isn’t a ridiculous 3 figure number.

Fox’s deal with Panasonic, where the electronic giant has exclusive rights to distribute the Blu-ray 3D version of Avatar with the 3D electronics, was one of the more controversial movie deals in recent times. Coming just at a time when Blu-ray 3D needed a launch title that could only come from the most acclaimed and most financially successful 3D movie of all time, the exclusivity deal meant that the format lacked a killer title available in stores that would have helped the format’s early adoption. As such, Blu-ray 3D hasn’t taken off in the way that electronic manufacturers and movie studios had hoped. 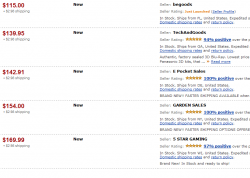 The Panasonic exclusive version of Avatar on Blu-ray 3D is still fetching 3 figures on eBay and Amazon, but the retail version will be available in October

With that said though, while people aren’t using 3D as much as studios would have liked, they’re still buying them because the price premium of 3D over 2D ranges between inconsequential and non-existent. Try and find a top of the range 2D TV that isn’t also 3D, and you’ll struggle. And when there’s only a $20 difference between a 2D Blu-ray player and its 3D equivalent, consumers don’t really have to make any hard choices.

Still, the retail release of Avatar on Blu-ray 3D should help the format break all kinds of records when the disc is released in October. The price is a bit higher than your average Blu-ray movie, $28 at Amazon, but it’s definitely better than paying $128 for it on eBay, right?

But don’t bet on this Blu-ray 3D Limited Collector’s edition to be the most definitive 3D version of the film to arrive on disc. The fact that this release might not even feature the extended cut means that Fox is already planning a quadruple dip of the film sometime in the near future.

Even for the 2D version, it’s only a matter of time before we see the 4K or whatever version of the film on possibly a new disc format, or if bandwidth issues are resolved, via streaming or download. Projects like Australia’s NBN and Google Fiber will aim to fix for the bandwidth issue once and for all with the move to fibre optics, which has almost an unlimited capacity to carry TB/s and beyond, but another solution is to increase the efficiency of the delivery codec. Which is why it was interesting to read about the news of a new format being officially approved by the Moving Picture Experts Group (MPEG), which promises to provide the same visual quality as H.264 with only half of the bandwidth needed.

H.264 is already super efficient, so it’s hard to believe that something could come along and double that efficiency, but HEVC, or H.265, aims to do just that through more computational intensive algorithms. Mobile applications would probably benefit the most from H.265/HEVC, due to their inherent bandwidth limitations, although faster (and more power hungry) devices may be needed to decode the video.

The other main beneficiary from a more efficient codec would be the web streaming industry, finally allowing the likes of Netflix to do true Blu-ray quality streams on connections less than 20 Mbps.

For other applications, 4K is an obvious candidate, but 4K only really benefits super large screens (say 80″ or above), and it’s an overkill for anything smaller. And if staying at 2K or 1080p resolution, the increased efficiency of H.265/HEVC may allow for same bitrate, but higher quality encodes, although you’ll get diminishing returns on any quality improvement for Blu-ray encodes, many of which are already visually flawless to the average viewer.

Blizzard’s Battle.net has become, perhaps, one of the most tempting targets for hackers in recent times. Not only does the company hold a heck of a lot of data for a heck of a lot of people, Blizzard also holds tons of financial information for all those subscribers to WoW, and all those buyers/sellers on Diablo III’s Auction House. And the company’s stance towards “always-on” DRM for D3 meant that anyone who pokes holes in their security will instantly receive a lot of “web cred” for their efforts. 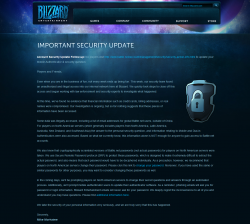 Blizzard was hacked last week, with a ton of user information stolen in the process.

So unsurprisingly, Battle.net was hacked this week, with a heck of a lot of data being stolen in the process, including emails, (encrypted) passwords, security questions/answers, and even data related to the mobile authenticator that’s supposed to prevent hackers from getting into your account. The scale of the breach is actually quite spectacular, with the email addresses of every Battle.net account (except for those in China – probably on different servers) being leaked, and pretty much all accounts on the North American servers being compromised further.

Just the other week, Blizzard was boasting about how effective “always-on” DRM has been in preventing piracy, which has meant the company has made record amounts of money selling the hit game. It’s a shame that they didn’t invest enough of their loot (using it in the Diablo III sense) in protecting their users, but when you treat your customers as criminals by forcing draconian DRM on them, their rights were never that important to start with.

And as mentioned in the intro, the July NPD report was released, with the Xbox 360 once again riding high among the home based consoles, selling 203,000 units. But it was still 26.7% down compared to the same month last year, although the other home based consoles probably didn’t fare much better (the Wii in particular). The holiday sales period is coming up soon, and with the Wii U out around that time, it will be interesting to see if the Xbox 360 and PS3 will make a comeback, or take a further hit, when sales ramp up for this period.

But a price discount could do wonders for the two ageing consoles, especially when up against the compartively pricey Wii U.

That’s that for the week. See you in seven!

This entry was posted on Sunday, August 19th, 2012 at 8:37 pm and is filed under Copyright, Electronics, High Definition (Blu-ray/HD DVD/4K), News Roundup, Nintendo Wii, Wii U, Switch, NPD Analysis, PS3, PS4, Video Technology, Xbox 360, Xbox One. You can follow any responses to this entry through the RSS 2.0 feed. Both comments and pings are currently closed.