The March 2008 NPD game console sales figures for the US has been released. It’s another month where all sides claim victory, and I guess it’s hard not to when the overall market has increased by a huge margin over the same time last year. I did predict last month that the Xbox 360 will out-sell the PS3, but barely, so was I right or was I wrong? You can read last month’s analysis here. The figures are from NPD, a marketing research firm that releases games console sale data every month.

The figures for US sales in March are below, ranked in order of number of sales: 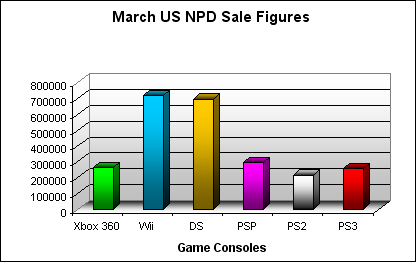 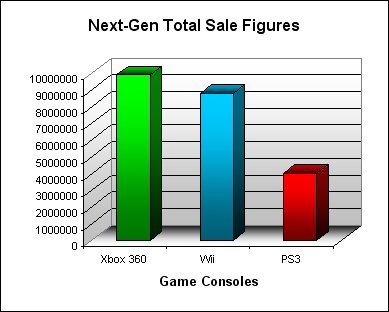 A couple of surprises this month. First, just look at those Wii sales figures! Amazing! You would think the “hype” surrounding the Wii would end by now, after two holiday sales periods where it was the “must-have” item, but it just continues to grow stronger where this month, it out-sells both the 360 and PS3 combined! The other surprise was that, despite expert predictions, the Xbox 360 did in fact reverse the last two month’s trend and out-sell the PS3, albeit by the width of a hair. Could Microsoft’s excuse about stock problems actually be correct?

The PS3 came fifth this month, with only the PS2 behind it, which must be somewhat disappointing for Sony. Sony will say that compared to this time last year, the PS3 is doing much better compared to the 360, and that’s true: the 360’s next-gen market share has dropped from 51% to just 43% since September last year, with the PS3 gaining from 14% to 18%. But these stats are a bit of a lie (aren’t they all), since the Xbox 360’s market share had to drop considering it was the first next-gen console on the market and with 100% of the market share at the beginning, the only way was down. What is worrying for the PS3 is that while the 360 had a period which it totally dominated the next-gen market (first when it was the only console available, and then for the PS3’s fragile first few months), the PS3 has not had a comparable period. Despite the technical superiority that the PS3 has over the 360, the sheer number of 360’s on the market plus the much more mature Xbox Live multiplayer service means that the Microsoft now has a solid footing in the gaming arena which is something they didn’t have with the original Xbox. Quantity has a quality of its own, as someone once said, and that’s what the 360 earned by having an earlier release date. On a side note, looking into popular culture, how many times have you spotted someone playing the 360 on TV or in movies? South Park, Disturbia, Transformers are just some of the recent shows/movies I’ve watched where the 360 was featured. I’m sure that helps to sell consoles as well, despite all the bad press over the RRoD problems.

And Microsoft raised a point about “ecosystems” last month, where they said console performance should not just be based on hardware sales figures, but also on software and community. In this respect, Microsoft has a very healthy “ecosystem”, but it doesn’t mean the other companies do not. Nintendo is building something very strong with the Wii/DS combination, and Sony with the PS3/PS2/PSP combination. If anything, Microsoft needs a portable game console to compete directly with Nintendo and Sony to fully take advantage of their better online gaming system.

But Microsoft are right in that while hardware sales haven’t been great compared to either the Wii or the PS3, it’s the software sales that’s really driving the Xbox brand at the moment. Here’s the top 10 sales chart for games:

Another good surprise for Nintendo, as Super Smash Bros. Brawl outsold everything by miles – one of the criticisms of the Wii is that it doesn’t have good games that sell in great number, but I think this myth has been dispelled this month. Other than that, the 360 has 4 of the top 10, and all of them are multi-platform games that are available on the PS3. The PSP did well this month too with two titles in the top 10, but the PS3 is still struggling with only one title, and at the bottom too.

Last month, I predicted the 360 would out-sell the PS3 by a small margin, based on nothing but a gut feeling. I was right (well even a broken clock is right 730 times a year). I also said last month that the 360 will do very well in April due to GTA IV, if not in hardware sales, then in software sales, and I’m sticking with this prediction. What’s really interesting is to see if the Wii will continue to have another good month, or will it suffer from not being on the GTA IV bandwagon? But then there’s Mario Kart, so you never know.

This entry was posted on Wednesday, April 23rd, 2008 at 4:08 pm and is filed under Gaming, Nintendo Wii, Wii U, Switch, NPD Analysis, PS3, PS4, Xbox 360, Xbox One. You can follow any responses to this entry through the RSS 2.0 feed. Both comments and pings are currently closed.