Is this what it has come to? Have we become that desperate to find out all we can about the new movie, that we’re analysing whether the hair shown near the edge of a still from the Star Wars VII trailer is Han Solo’s or Chewbacca’s? For me, matters not the story does – it’s the journey (“Here we go again!”) that I’m most looking for, as it’s a real comfort to be back in the Star Wars universe again (and for all the problems with the prequel trilogy, and there were many many problems, you have to admit it was nice, back at the time, for the whole world, not just geeks like us, to be so Star Wars crazed. Just like now!). So no more analysing, no more second guessing, let’s all just take a step back, wait patiently and go watch the movie in December. We’ll all enjoy it a lot better this way!

Here’s the news for the week …

I posted this two weeks ago about the demise of YTS/YIFY and Popcorn Time:

It’s all very confusing, and it’s hard to believe this sustained and multi-pronged attack on anything Popcorn Time related isn’t coordinated at some level (although it really could be just a coincidence, who knows). 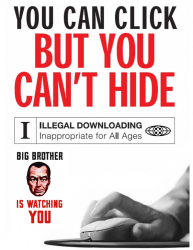 The MPAA has been busy of late …

Both the take-down of YTS/YIFY, and the closure of the most popular branch of Popcorn Time, as we found out this week, was indeed part of a larger concerted effort by the MPAA. While both take-downs may have occurred independently, and that the timing was just a coincidence, there is no doubt that the MPAA had been working long and hard behind the scenes to put the pressure on these two related entities (Popcorn Time relied on YTS/YIFY provided content).

So while the MPAA appears to have had a great victory, the moment of triumph may be short lived if history is any guide, and something newer, probably better, will come along and replace these now defunct piracy outlets. As usual, makes for good headlines – but very little actual practical effect in the long term.

Speaking of ineffective, DVD and Blu-ray ripping remains illegal for yet another day as the US Copyright Office rejected calls for a legal exemption for disc ripping to protect fair use rights. So while you are within your full right to rip your own Blu-ray and DVD movies for fair use purposes (such as transferring media between your digital devices), it remains illegal for you to actually exercise your rights. The Office rejected the exemption because they feel that the act of ripping your own discs still has too much of a relation to piracy, which is also the same reason why they rejected an exemption for jailbreaking of game consoles.

What is now allowed is the cracking of DRM for games that have been abandoned, but only for “local play” portions of the games, not the multiplayer. So if Blizzard one day abandons the authentication servers for StarCraft II, for example, you’re within your legal rights to crack the crap out of the game – but only for the single player campaign, not the multiplayer component. Why the distinction? I’m not sure, since an abandoned game is an abandoned game, and I can’t see why gamers are allowed to play the single player missions, but are barred from doing anything to salvage the multiplayer component (assuming there are no intellectual property issues related to replicating the multiplayer/authentication servers).

Amazon, Netflix and Hulu may have less Warner Bros. and HBO stuff in the future

Don’t be surprised to see HBO and Warner Bros. content gradually disappearing from SVOD outlets like Netflix and Hulu. Time Warner, which owns these properties, feels they’re just not making enough money from licensing SVOD content and is seriously considering delaying the release of content on these platforms, or forgoing releases entirely.

This stance may seem at odds with recent moves by Time Warner, which includes giving Netflix the first season of “Gotham”, and opening up HBO’s catalog to Amazon. These, however, were most likely done to promote these Time Warner assets, and getting Netflix/Amazon involved was just the best way to achieve this. This could also point to the further fragmentation of the SVOD market, with Time Warner likely to funnel more content to its own SVOD and digital platforms at the expense of Netflix, Amazon or Hulu. Not too dissimilar to what CBS is doing with its All Access platform, which has led to missing or disappearing content on Netflix, Amazon and Hulu.

And that’s that for the week. As usual, there’s some more streaming related stuff on my other site Streambly, including a look at what’s new on Netflix/Hulu in November. See you next week.

This entry was posted on Sunday, November 8th, 2015 at 6:00 pm and is filed under Computing, Copyright, Gaming, High Definition (Blu-ray/HD DVD/4K), News Roundup, Video Technology. You can follow any responses to this entry through the RSS 2.0 feed. Both comments and pings are currently closed.