In case you missed my addendum to last week’s WNR, here are the H.264 and HEVC versions of the Star Wars 7 trailer. I am kind of ashamed to admit that I’ve watched the trailer about 15 times this week. And yet I still have this horrible feeling that the movie will really disappoint. I call this the Jar Jar conundrum.

On to the news!

YIFY/YTS is no more. But piracy will continue on …

One of the world’s most prolific piracy release groups, YIFY, has decided to call it a day. The reason for the group’s end, as well as the closure of the group’s torrent website YTS, has not yet been made public though, but will be made public in the coming weeks. The end of YIFY/YTS marks the end of an era for Internet piracy, as the group’s 6000 releases will contest to just how important it has been for the piracy scene since the group first surfaced in 2010.

But despite the short term upheaval the loss of YIFY might cause, with many fake YIFY branded torrents already flooding the scene, the long term prospects for piracy remains bright, for want of a better word. Another existing group will take over the duties left by YIFY, or maybe a new group will simply emerge, just like how YIFY emerged in 2010.

While the torrent downloading of pirated works is still a big thing, the recent trend has seen a move towards streaming piracy. And filmmaker groups, the Directors Guild of America, Inc. (DGA) and the International Alliance of Theatrical Stage Employees (IATSE), say that the way the law treats download and streaming piracy is creating a legal loophole that’s allowing pirates to profit. The loophole exists because uploading a file for downloading is considered distribution, while streaming is considered a public performance. The former is felony offense, while the latter is only a misdemeanor.

Rights groups say that should the government change the law to please these groups, the consequences could mean felony charges and even prison time for YouTube uploaders, even those unaware of copyrighted content existing in their video uploads. It’s also worth noting that even without streaming piracy being a felony, authorities already have plenty of firepower in their arsenal, including domain seizures, to stop streaming piracy sites. And I doubt streaming site operators care whether they’re only committing a misdemeanor, or if it’s a full blown felony – just like torrent and download site operators don’t care. 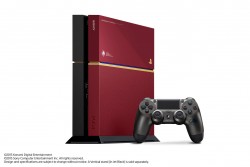 Would you buy a Super PS4?

Is there are market for a “Super PS4”, that has upgraded performance to allow for better visuals, maybe even 4K gaming, as well as a new Ultra HD Blu-ray disc drive to play the latest 4K movies? Amazingly, this “Super PS4” may become a real thing, according to Sony Computer Entertainment (SCE) Vice President Masayasu Ito. Of course, this all depends on whether people are willing to pay for this premium version of the PS4, and whether game developers need to do work to take full advantage of the enhanced PS4.

As for the Ultra HD Blu-ray support, it would give the new format a nice boost, just like how the PS3 helped Blu-ray at the beginning. With 4K currently being limited to movies, it would give 4K TV manufacturers a nice boost if the enhanced PS4 came with 4K gaming support.

Alright, that’s it for this week’s news stories. Time to watch the Star Wars trailer again … see you next week!

This entry was posted on Sunday, November 1st, 2015 at 8:35 pm and is filed under Copyright, High Definition (Blu-ray/HD DVD/4K), News Roundup, PS3, PS4, Video Technology. You can follow any responses to this entry through the RSS 2.0 feed. Both comments and pings are currently closed.