Not a lot of news this week, which might be related to the Labor Day holiday in the US. Or the fact that the quota for news stories might have all been used up (during the the very busy) last week.

So this won’t take long at all, I suppose …

Norway has started blocking The Pirate Bay, but they’ve chosen to do it on the DNS level, which makes bypassing the filter as easy as changing from your ISP’s DNS servers to a public one (like the ones from Google – this is probably recommended even if you’re not subject to draconian censorship regimes, from performance, reliability and security points of view). And to make users aware of how easy it is to ignore this latest misguided censorship effort, the Norwegian Pirate Party has launched their own public DNS server.

Okay, I admit, this isn’t the most enticing of news stories. But I was scraping the bottom of the barrel, and this story about rights-holders pursuing an utterly futile course of action that sets a dangerous precedent at the same time as having no positive consequences for anybody involved, was the best I could do this week.

That was until yesterday, when I glanced upon this story about a new app called Aurous that’s set to make music piracy as easy as Spotify. Not that Spotify is hard to use, and of course, you can use it without paying – but it’s also not as perfect as it could be, with not all songs being available and no offline/download mode unless you pay. This is what Aurous promises to make up, that and to also be pain in the ass for the music industry. 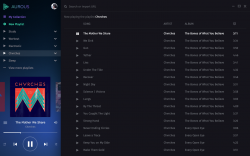 The early alpha versions of Aurous, available on pretty much all the major platforms including mobile ones, is still lacking many of the features that makes Spotify really cool – like discovery and radios, so from a usability perspective, Spotify does still have a few cards up its sleeve, even for the free version.

And there’s the “good enough” factor to consider. While Spotify may not be perfect, it might be “good enough” for most people to not have to bother going down the piracy route, even with something as easy to use as Aurous. The same cannot be said for movies and TV shows – as good as Netflix is, it just doesn’t have most of things you want to watch. This is why Popcorn Time, a similar concept except for video content, is such a hit and such a disruptive force for the industry, whereas Aurous may never achieve the same effect (and notoriety).

Speaking of offline/download mode, and following last week story about Amazon Prime adding this feature to its streaming service, Netflix has responded this week by confirming that they’re not considering adding the same feature.

But I’m not sure I buy their reason for not adding this feature, which is that while users want the feature, most won’t use it because it’s too complex (since users will have to manage local storage, queue downloads, you lose the instant play ability, and since not all titles will support downloads, it adds to further user confusion). Users can always choose to not use the download feature if they find it too complex, so I don’t see what Netflix has to lose by adding the feature.

Actually, I do see what Netflix has to lose – money. Rights-holders will want more for the licensing rights to downloads, and licensing costs is something Netflix has been trying to reduce, either through producing their own original content and by ending content deals with the likes of Epix.

But users also have plenty of gain if they had access to an offline playback mode, even if it’s just for selected titles. Being able to queue up a few offline titles to watch could be a godsend for vacations to places with poor to non-existent Internet connections, for example. So perhaps Netflix should reconsider, and give users what they want (even if most might not actually use it, all the time).

The August NPD results are in and the PS4 has won yet again. As usual, all the companies spun the results into something super positive for themselves (Sony didn’t have to do as much spinning, to be fair). Microsoft bigged up the Xbox One’s sales increase and its big release slate for the rest of the year, while Nintendo talked about the 3DS, Amiibo and Splatoon, but failed to mention the Wii U at all, which is probably for the best.

So that was the week that was. A nice and quiet week, hopefully leading up to a nice and not so quiet week next week. See you soon.

This entry was posted on Sunday, September 13th, 2015 at 6:00 pm and is filed under Copyright, Gaming, News Roundup, Nintendo Wii, Wii U, Switch, NPD Analysis, PS3, PS4, Video Technology, Xbox 360, Xbox One. You can follow any responses to this entry through the RSS 2.0 feed. Both comments and pings are currently closed.