If you’re sick of the iPhone 6 overload this week, then you’ve come to the right place. There’s only one paragraph in this WNR about Apple’s new phone, and it has to do with perhaps the most boring aspect of the phone. There’s also a rant in there about print media. Fun times! 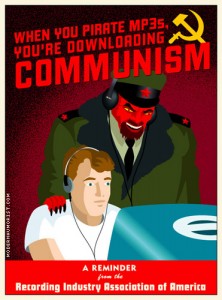 Time to bring out this classic poster again …

Piracy losses are translating to higher prices for consumers and is having a negative effect on the economy. This has been one of the major argument for a crackdown on piracy, but according to leading economists in Australia, the reverse might be true. This week we again turn our focus to Australia and the heated debate there over what to do about the piracy problem. A submission this week to the government from leading economist Henry Ergas and the former head of Australia’s peak consumer body Allan Fels argues that the government’s plan to make ISPs monitor user downloads is actually bad for the economy, and bad for consumers.

Their argument is that the high cost of running such a program, nearly $150 million a year, will not translate to anything close to this in terms of increased revenue and benefits to the economy, based on current evidence. And any increased revenue to rights holders are unlikely to be passed on to consumers. In the most optimistic scenario under the government’s proposals, where piracy is substantially reduced, the removal of the need for rights holders to “compete” with pirated downloads may actually bring about higher prices for consumers, and actually end up “incentivizing” piracy, the submission also warns.

If this “incentivizing” happens, then piracy rates will back up again and the only options left for rights holders would be to improve the value of their offerings, greatly improve the availability of legal content on services that consumers want to use, and also ensure things like release window delays are as short as possible. Basically all of the things that they should be doing right now to fight piracy instead of asking the government to intervene, argues the economists.

The most worrying thing about the Australian debate right now is that all of these same arguments have been heard before, and the practical actions suggested have already been tried, tested and shown to be largely ineffective. And yet, we still have rights holders asking for legislative action. It’s interesting that rights holders in the US have stopped asking for the same, at least not publicly, all because they fear the same kind of consumer backlash that occurred when SOPA/PIPA was being debated. Which is why the MPAA this week again re-iterated their lack of desire for legislative action. The MPAA’s Chris Dodd was saying all the right things too, about not “finger pointing at everyone” and “arresting 14 year-olds”, but instead to focus on “accessibility” and releasing content at “price points [consumers] can afford”. At the very least, it seems rights holders there have lost their appetite for new laws (publicly at least), just like how rights holders here in Australia have lost their appetite for legal action (having lost a major case a couple of years back). Well, at least they’re learning (in terms of what they say publicly, at least).

I was going to write a full length news article on this story based on the attention grabbing headline of “NewsCorp: Google is a ‘platform for piracy'”. Ohh, I though, Murdoch is on one of his piracy rants against Google again, oh goodie. But then I read the article and it wasn’t really focusing on the piracy problem, or the kind of piracy that I usually talk about here. Rather, it was mainly about the dispute between NewsCorp and Google, and goes much deeper than who is downloading what via the search engine. In case you don’t know, newspapers have a love/hate relationship with search engines like Google. Mostly hate these days. They don’t like the fact that Google “aggressively aggregates” content (some of us webmasters don’t like it either), in which Google takes content from sites and sticks it in the search results (with credit and links, but done in a way that makes visiting the site unnecessary – do a search for “aggregation definition” on Google, and you’ll know what I mean). Which is why drastic measures such as blocking Google crawling have been employed in the past to try and stop Google’s content “stealing”, which unfortunately has the side effect of greatly reducing your visibility to users. Pay walls were then introduced to try and make news profitable again, but in my opinion, it only made aggregated content more valuable (as sometimes a headline and summary is enough, especially compared to the cost of paying for the full thing). Google’s argument is that it’s good for the end users, which it is, but it’s also easy to see why some content creators are not happy with what Google (and to be fair, the other search engine too) is doing.

While there are legitimate arguments to be made about the content aggregation issue; the lack of genuine competition in the search sector; and issues of anti-competitive behaviour with Google’s perceived favourable treatment of its own products over those from other companies (Google is both a partner, and a competitor, to content creators, in my opinion); on the flip side of the coin you could argue this is just another case of old media not being able to adapt quickly enough. In NewsCorp’s accusations against Google, this interesting passage caught my eye: “For example access to 75% of the Wall Street Journal demographic at 25% of the price, thus undermining the business model of the content creator”. Undermining, or just doing business in a more efficient way? Google could label the same accusation against more successful social media platform, which are offering even better targeting at even lower prices (with Google+ having failed to be as successful in doing the same). But isn’t this just progress and innovation?

As for the woes of the newspaper industry, I don’t know if it’s fair to blame Google, or even the Internet in general for their troubles. To me, if a product is worth paying for, people will pay for it. If people’s expectations of what something is worth has changed, and you can’t re-engage with people again to convince them that paying for news is worthwhile, then perhaps it’s time to re-think the whole business of news. Maybe it shouldn’t be a business at all, but a publicly funded, truly independent institution who’s goal is not profit, but the actual betterment of society and democracy. Then maybe we’ll get back true journalism that protects, not undermines, democracy (via the dumbification of news and the serving of vile populist garbage in the name of profit – the click-baiters of their time – tactics that NewsCorp should be very familar with). 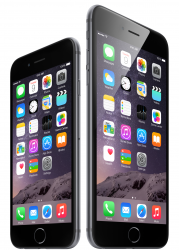 I suppose I should mention the iPhone 6. Not that it has much to do with what I cover in the WNR, except for this slightly related story about the choice of codec being used for FaceTime over cellular 3G/4G. The use of HEVC/H.265 makes a lot of sense when combined with the iPhone 6’s more powerful processor (which is needed for realtime HEVC encoding/decoding) and the need to reduce bandwidth requirements, while increasing the quality of video calls. Would this be the first mass consumer product to feature built-in HEVC/H.265 support? Possibly, and it won’t hurt the format’s chances to become the next de facto standard for web video.

Which is why things are not looking great for Google’s VPx, their open source, royalty free alternative to HEVC/H.265. I’m sure Google’s Android will be pushing VP10 if/when it is released sometime next year, but apart from the lack of industry support for the format, technically, it just doesn’t seem to be quite there compared to the more polished and efficient HEVC. As one industry analyst said recently, “The industry has already selected HEVC,” and that, I’m afraid, is that for Google’s VPx.

Tests have shown that VP9, while perhaps better than H.264, cannot really compete at the moment with HEVC. Surprisingly, VP9 is in practical use to a much larger degree than HEVC at the moment, thanks to Google pushing the use of the codec for YouTube, and also superior native browser support due to the codec’s open-sourcedness. But with Netflix 4K choosing HEVC, Blu-ray 4K also choosing HEVC, and now Apple also going down the HEVC route, there’s not much room for VP9/VP10 to grow into. Nobody wants another format war, especially one as tame as this one, so the industry will choose one format and just go ahead with it – and right now, the choice is definitely HEVC.

As promised last week, more on August’s NPD results right here. The PS4 was again the most popular console, 8 month in a row, but it appears that its lead has shrunk somewhat. Unconfirmed information suggests that the PS4’s 175,000 units sold was just ahead of Xbox One’s 150,000. Nothing official from either Microsoft or Nintendo though, so the difference could actually be much greater than that (especially for the Wii, as Mario Kart fell out of the top 10 games chart in August).

Xbox One needs to be cheaper than the PS4

More worrying for Microsoft is that traditional Xbox 360 favourites like the Madden series are being won by Sony, with the PS4 version of Madden NFL 15 outselling the Xbox One and Xbox 360 version. In fact, the same trend is true for all of the top selling multiplatform games right now except for Call of Duty: Ghosts. The next Call of Duty game will be interesting, not only is it one of the biggest franchises around, this time, we may actually see the PlayStation become the top performing platform for the series’ next chapter. If this were to happen, it could have serious implications, in that developers will most likely make the PS4 their lead platform (if they haven’t done so already) and the Xbox One version of the same game will suffer, thus causing the sales/quality/value gap to grow even larger.

I bet Microsoft wishes now more than ever that they can have a do-over, so that they would have never bothered with all that DRM crap, and released the Xbox One without Kinect for cheaper than the PS4. It would have made the Xbox One a sure winner, but I guess they grew overconfident and felt they had room to experiment. The same kind of “arrogance” maybe that was responsible for the PS3’s relative failure. The good news for Microsoft is that their backflips have been fast and decisive, and so there’s still time to pull one out of the hat. But the Xbox One needs to be cheaper than the PS4 to have a real chance, and I’m not sure if Microsoft can afford to do it at the moment.

This entry was posted on Sunday, September 21st, 2014 at 4:11 pm and is filed under Copyright, Electronics, Gaming, High Definition (Blu-ray/HD DVD/4K), News Roundup, Nintendo Wii, Wii U, Switch, NPD Analysis, PS3, PS4, Video Technology, Xbox 360, Xbox One. You can follow any responses to this entry through the RSS 2.0 feed. Both comments and pings are currently closed.