I spent most of the week alternating between viewing Ken Burns’s The War, Saving Private Ryan, Band of Brothers and The Pacific. It all started with The War, and escalated very quickly from there. Some of my dreams this week were in black and white.

On to the news!

isoHunt to close within 7 days, as settlement deal means the torrent search engine will have to pay the MPAA $110m in damages

isoHunt is no more. The site, and its beleaguered owner finally threw in the towel this week and agreed to a $110m settlement deal with the MPAA, which will see the 10 year old site shut down within the next 7 days.

The big settlement figure will bankrupt both isoHunt and Fung, and so it’s unlikely the MPAA will receive much of the $110m, if any at all. But the MPAA is not here to make money – the big number is simply there to scare others into submission, although I don’t think the likes of TPB or KAT will be quaking in their boots at the result.

All it will do is drive site operators underground, and push sites to relocate to countries where the MPAA won’t have an easy time filing and winning lawsuits. You can’t sue anyone if you can’t find them, or even know who they are!

A sign that distributors are finally getting the message. 20th Fox, the international distributors of the hit zombie TV series The Walking Dead, this week announced a plan to reduce the international airing delay for the new season 4 episodes of the show to a single day or less, in a bid to reduce piracy. The commendable plan, however, has not been the shot in the head needed to kill the piracy problem, as the new season of The Walking Dead broke new piracy records for the show on torrent networks.

Killing piracy is much harder than killing zombies on TWD

Most interestingly, the premier episode of season 4 had been made available for free streaming for US viewers, legally, on AMC’s website. Despite this, 15.5% of downloaders came from the US, the most popular country for downloaders. This in itself is not unusual. When the new season of Arrested Development was aired exclusively on Netflix earlier in the year, many paying subscribers also chose torrent download as their viewing options of choice. And it was revealed recently that in Australia, pay TV subscribers that had paid access to new episodes of Game of Thrones still went out of their way to download the pirated version, all in an effort to bypass the 2 hour airing delay. Less Australians chose to download The Walking Dead in Australia, as a percentage of total downloaders, compared to Game of Thrones – new TWD episodes air 90 minutes after the US broadcast in Australia.

So what does this all mean? For one, it shows users are pretty specific about their viewing habits, and many simple prefer the convenience of piracy (the platform agnostic nature of it), even when a less convenient, but free and legal option is available. And while it’s commendable that airing delays are being seen as a cause to piracy, any delay, even a 2 hour one, may still be pushing viewers towards piracy. And of course pricing is an issue, as many people simply cannot afford the $45 needed here in Australia per month to subscribe to our sole cable provider, Foxtel, and access new episodes of The Walking Dead. Nor do they want to get tied up to cable or satellite subscription, which isn’t even available in all areas of the country. Even Foxtel’s recently launched Internet streaming plan (Foxtel Play) is limited in that, while it gives you access to the channel that airs The Walking Dead, the Foxtel Play app only works on the Xbox 360, PCs and Samsung Smart TVs (effectively ruling out the most popular entertainment devices here in Australia, the PS3 and iPad).

No airing delays, maximum platform compatibility, and more reasonable pricing. That’s what’s needed to beat TV piracy. It won’t kill piracy, it will always exist, but it can be made irrelevant, a manageable threat like the zombies on The Walking Dead (may no longer be true for season 4).

To beat film piracy requires largely the same approach. The issue of platform compatibility, of allowing the film to be rented or bought on the platform of choice for consumers, is as important as making sure the price is reasonable. And despite the film industry blaming pretty much everyone else for the piracy problem, the industry itself is not without blame. That’s what a new website, piracydata.org, plans to highlight.

piracydata.org takes the most pirated films data from TorrentFreak and then does an online search to find legal alternatives for these films, and unsurprisingly found that very few of them are available digitally. Most are available to buy legally from places like iTunes, but try to rent it digitally or stream it on Netflix, and you’ll be out of luck.

There is an issue with the methodology used by piracydata.org though, in that the most pirated films are almost always new releases, and it is unrealistic to expect these films to be available on legal streaming options like Netflix. But I was surprised at how few films were available for digital rental, and how many are still unavailable to buy outright. So much for the MPAA blaming Google for displaying piracy results for film searches – what exactly is Google supposed to do when there are no legal options available?

For the films that are available to buy digitally, their pricing makes them entirely unattractive. For example, the most pirated film currently is Pacific Rim. The Blu-ray combo edition, which includes an UltraViolet digital copy of the film, plus the Blu-ray and DVD versions, is only $3 more than the iTunes version at current prices. This either makes the Blu-ray combo edition extremely good value (not really, considering Blu-rays have always been around this price), or the digital edition a total rip-off. And they wonder why people download torrents!

Sony has done it! After 32 month of Xbox 360 domination, the PS3 finally became last month’s best selling home based console. The September NPD data, which looks at video game hardware and game sales in the US, might as well have been renamed the September GTA. GTA V represented 50% of all dollars being spent on gaming for the entire month, and it was the catalyst behind the PS3 win. The PS3’s win comes largely off the back of the PS3 GTA V bundle – an equivalent bundle was not available for Microsoft’s console. 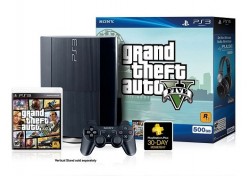 The Xbox 360’s loss is possibly just a one-off, with normal service likely resuming once GTA V sales dies down (when they run out of people who don’t have the game to sell the game to). 1.6 million Xbox 360s have been sold so far this year, with the holiday period yet to come. But if early pre-order reports are to be believed, the PS4 will win the first few month of the next-gen console wars at the very least, thanks to its $100 lower price tag.

There was also good news for Nintendo, with Wii U sales jumping by 200% (or 3 times as many) compared to August thanks to a price cut and a limited edition The Legend of Zelda: The Wind Waker HD bundle. Three times as many console sales probably still saw the Wii U selling fewer units than the Xbox 360.

I haven’t played GTA V all last week. Just haven’t found the time to do it, and was dispirited after trying GTA Online, only to be killed and have money stolen because I could not move my character for some reason. My character is one of the thousands of characters in the game based on Jesse Pinkman from Breaking Bad (well, a really ugly version of him anyway), so (slight BB spoiler ahead) a depression induced catatonic state and being liberal with your hard-earned money is probably not that unrealistic for a Pinkman based character.

That reminds me, I have to make a Walter White character, which, given the right clothing and facial hair choices, should be easier to create.

See you next week.

This entry was posted on Sunday, October 20th, 2013 at 4:11 pm and is filed under Copyright, Gaming, News Roundup, Nintendo Wii, Wii U, Switch, NPD Analysis, PS3, PS4, Xbox 360, Xbox One. You can follow any responses to this entry through the RSS 2.0 feed. Both comments and pings are currently closed.