2009 is now over, and we now have enough stats to go back and review the entire year, with focus on the PS3, Xbox 360 and the Nintendo Wii. The stats are from NPD, and are for the US market.

The total hardware sales figures for 2009 are as follows:

This is a breakdown of these numbers, for the Xbox 360, PS3 and Wii: 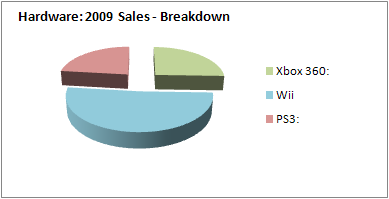 If you compare the above graph with the equivalent one for 2008, you can see that overall, the situation is still fairly similar. The Wii domination is still present, although it has lost a small chunk of that pie to the PS3 mostly (the Wii had 55% of the three way pie in 2008, compared to 51% in 2009). The Xbox 360’s market share remains quite similar, with the green piece of pie above representing around 25.5% of the market (in 2008, it was 25.6%). So the quick conclusion is that the PS3 is the winner in terms of growth in 2009, with the Xbox 360 just about pulling even, and the Wii losing out. Looking at the total hardware sales numbers above the graph, this is pretty evident, with Wii sales down nearly 6% for the year. Wii sales has been disappointing for much of 2009, even when PS3 sales were also disappointing at the beginning of the year. It was during this time that Xbox 360 sales were strong, but there was a weak period in the middle for the Microsoft console. The PS3 finished the year strongly, and the Wii even stronger. So while the graph seems to show the PS3 taking away sales from the, the actual series of events was more complicated.

Of course, if there is one event which really defined the year for the PS3 then it came in September when the PS3 Slim was released. More importantly, it was also this time that Sony decided to cut prices for the PS3, to bring it more in line with that of the other two home based consoles. To demonstrate this turning point graphically, it is best to compare sales of the PS3 to the Xbox 360 both before and after the official introduction of the Slim: 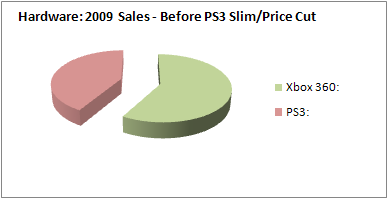 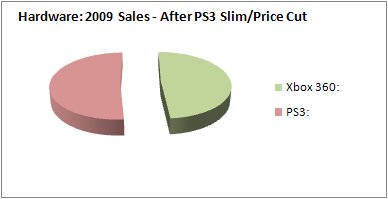 I think the graphs speak for themselves. Note that it again would inaccurate to say that PS3 took sales away from the Xbox 360, and although there is some truth in that, it isn’t the whole picture. The above graphs are almost exactly the opposite of what happened in 2008, when the PS3 had a good lead over the Xbox 360, but the subsequent price cuts helped the Microsoft console fight back in style. The PS3 “fightback” was less stylish than what happened last year, but the price cut was also more moderate, and the Xbox 360 had Modern Warfare 2 to help with sales.

Now let’s look at game sales. Looking only at the monthly number one titles, here they are: 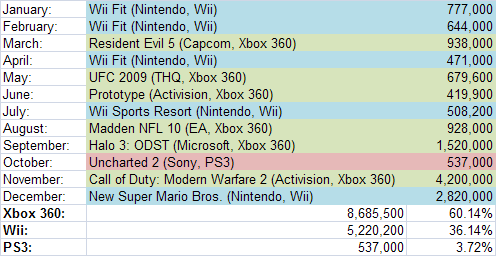 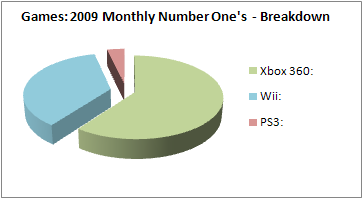 Microsoft’s dominance continues on from last year (60.96% back then versus 60.14% in 2009), but the Wii has managed to grab a few more spots, with the a single title that won best selling game of the month for the PS3. Only looking at the monthly number one’s is always a bit misleading, because monthly winners do not always equal yearly winners, and several of the listed titles are not in the yearly top 10. But monthly number ones are important, in that it provides hype and recognition for the console and games that win it. Developers will develop for the console that can allow them to top the monthly and yearly charts. But this is also where we see the big problem with the Wii, that despite having many monthly number one’s, all of them are first party Nintendo developed games. Third party games on the Wii are doing quite poorly and many developers have already signaled their intention to reduce resources towards Wii game productions, which is not good news in the long term for Nintendo. So while Nintendo is making the big bucks, they need to share or end up with a console with a very limited range of in house produced games.

Taking the above approach and extending it to the top 10 games every month, we have the following breakdown in terms of game units sold: 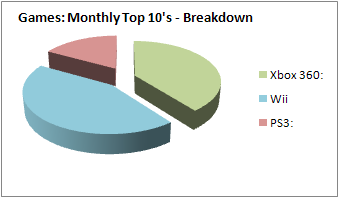 On the surface, this seems to indicate tremendous growth for software sales in 2009, but software revenue is down nearly 10% compared to the year before. The biggest games of 2009 were bigger than the biggest games of 2008, but everything else was down. But you will also see the Wii domination here, and the software growth for the PS3 as more and more consoles get into people’s homes.

The yearly top 10 will give us an even better picture of where things are, although at the current time of writing, I do not have actual figures for sales, just the ranking, which you can see in the table below: 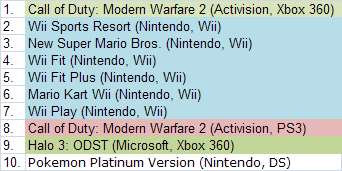 If and when I get concrete stats, I will update this article with them and the related graphs, but even without them you can see the clear Nintendo domination in games. While the Xbox 360 had the top title in Modern Warfare 2 (whereas last year’s top 4 were all Wii titles), it appears that the Wii domination has been extended. The PS3 still has the solitary single game in the top 10. But again, the problem of poor third party games on the Wii is clearly evident, 6 Wii titles and 1 DS title in the top 10 and not a single third party game. Meanwhile, the top Xbox 360 game and the only PS3 game were all third party titles. It’s clear why third party publishers like Activision or EA likes the PS3 and Xbox 360, and not so much the Wii when it comes to counting profits. It is an area that Nintendo needs to work on, perhaps helping third party developers to get more out of the Wii and throw in some more promotion and product bundling.

What the stats that I posted monthly, and what is shown above doesn’t tell you is overall revenue. Gamasutra has these stats here and despite the PS3, Sony is actually the biggest loser of 2009, in terms of revenue. This is because despite positive PS3 growth, PS2 and PSP sales are down 28 and 34% in number of units sold and probably greater in terms of revenue due to price cuts. Sony lost more than a billion dollars worth of revenue between 2008 and 2009, and the market share of the PlayStation brand shrank from 34% in 2007 to 26% in 2009. Nintendo is the big winner, and now controls 50% of the market in terms of revenue, with the Xbox 360 being a small winner compared to 2008, but still losing market share compared to 2007. While Sony may be confident that PS3 growth will eventually replace lost PS2 sales, the PSP is less positive and has not been able to compete with the DS and DSi for sometime now, with the DS/DSi recording the second best set of growth numbers in 2009 . For Microsoft, having only a single home based console, there’s less room to maneuverer and they will hope that Project Natal will be able to grab back some of the market share from the Wii’s casual gaming audience.

So that was the year that was. The economy, PS3 price cuts, and a few selected high profile games (Modern Warfare 2 comes to mind) were the major factors influencing the year. While sales are down compared to 2008, which was a record year like never before, the industry can still be relatively positive and 2009 still represents the best year apart from 2008.

This entry was posted on Thursday, January 21st, 2010 at 7:12 pm and is filed under Nintendo Wii, Wii U, Switch, NPD Analysis, PS3, PS4, Xbox 360, Xbox One. You can follow any responses to this entry through the RSS 2.0 feed. Both comments and pings are currently closed.