The April 2009 NPD figures are out, and on the surface, it makes bad reading for the gaming industry. Sales of both hardware and software are down, and even more so compared to the same time last year. Is the gaming industry in trouble, or are the figures not really as bad as they seem? Read on the find out. The figures are from NPD, a marketing research firm that releases games console sale data every month.

The figures for US sales in April 2009 are below, ranked in order of number of sales (April 2008 figures also shown, including percentage change): 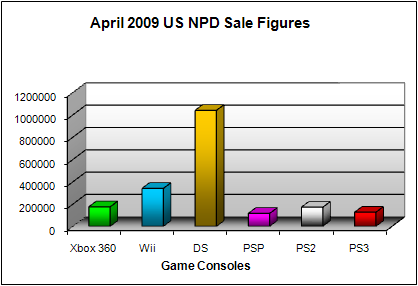 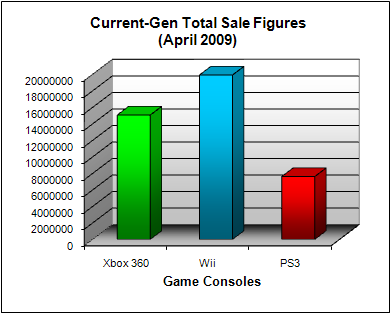 NPD Game Console Total US Sales Figures (as of April 2009)

I have no idea what’s on sale next month. I could check, but I’m lazy. Suffice to say, I don’t expect the situation to change much, although hardware sales could improve. Can the PS3 outsell it’s 2008 self? I’m going to say yes again to that, even though I was wrong last month. This is because April 2008 was a bad month for the PS3, the first signs that it wasn’t going to beat the 360 in 2008 like the first few months had promised. Sony will hope April 2009 will be a better month.

I was right. I was lazy and I should have checked. No, the PS3 once again did not out-sell its 2008 self. It didn’t even manage to outsell the PS2 this month. And the situation has changed, because everything is down, apart from the DS and the PS2.

Starting with what little good news we have this month. The DS did manage to outsell its 2008 self, but only because a new DS, the DSi, was released. But still, a 150% increase is impressive regardless of the reason behind it. The PS2 is the only other console to have increased in sales compared to the April 2008 figures. This I think is largely down to the recent price drop announced by Sony. If a small price drop for such an old console can show this kind of result, imagine what a price drop can do for a PS3? The rumours of a new PS3 “slim” with a lower price due to a cheaper manufacturing process may explain why Sony is reluctant to drop PS3 prices for now, and reports show that the PS3 is currently losing around $40 per console sold, and Sony can’t afford to increase its losses this financial year.

On to the bad news. The least bad this month is the Xbox 360 sales figures, which only dropped *only* 7% compared to last year, although it still meant a 47% month-to-month drop for the console. But compared to all the other consoles, it did well. The low price of the Xbox 360 may have something to do with this. The Wii, PSP and PS3 all recorded dismal efforts, falling both in month-to-month and year-to-year comparisons. The fact that the PS3 was outsold by the PS2 should ring alarm bells at Sony HQ. The Wii’s good run seems to have come to an end, although it was still comfortable the best selling non portable console. The PSP is going nowhere. Fast.

But to put everything in perspective, April 2008 was a good month for software at least, due to the release of GTA IV and Mario Kart for the Wii. So let’s not over analyse the April 2008 to 2009 comparison. April 2009 is a bad month, but it’s not as bad as it looks.

Software wise, again due to April 2008 being a huge month, there is an overall drop in sales. In the top 10, Wii comfortably held the most market share, followed far behind by the Xbox 360, and the PS3 even further behind. Nintendo’s usual suspects, Wii Fit, Wii Play and Mario Kart, were responsible for this, and the only Wii titles in the top 10. Where are the third party titles, you have to wonder. April wasn’t a great months for hit releases either, with the sequel “The Godfather II” being the only notable release. It was the top selling Xbox 360 game, and outsold the PS3 version by 1.7:1 (the PS3 version was the top selling PS3 game, coming at 10th on the top 10 list). Resident Evil 5 for the Xbox 360 was again in the top 5, just behind The Godfather II – it’s strange to see an iconic PlayStation title doing much better on the Xbox 360 than on the PS3. RE5 on the 360 outsold the PS3 version by 1.6:1 last month, although the 360 enjoys a 2:1 lead over the PS3 in hardware numbers. This means, at least for the hit games, the PS3 is doing better than expected, which is some good news at last for Sony. The Wii had 42.7% of the top 10, Xbox 360 on 19.4% and the PS3 with only 4.6%. The rest, 33.3%, belonged to the DS, making April 2009 definitely one to remember for the portable console. Here’s the complete list of the top 10 software sales:

Can a recovery take place in May? Looking at the Amazon top 10 charts now, it doesn’t look like a great month for games. PS3’s exclusive Infamous might make a dent, but it may come too late in May to make a huge difference to May’s figures. I’m going to predict a slight recovery for the PS3, as PS2 sales will start to drop again following the price cut, and PS3 has nowhere to go but up, especially if Infamous can help to lift sales up. Everything else the same as it was this month, I suppose.

This entry was posted on Monday, May 18th, 2009 at 5:06 pm and is filed under Nintendo Wii, Wii U, Switch, NPD Analysis, PS3, PS4, Xbox 360, Xbox One. You can follow any responses to this entry through the RSS 2.0 feed. Both comments and pings are currently closed.