It’s that time of the month again, and NPD has released the April 2010 US video games sales figures for this little blog to analyse. March was a big month for the PS3, and all eyes are on the Sony console to see if it can repeat the stellar performance in April. NPD itself has a few changes, in that they are no longer counting PS2 sales (perhaps Sony should take the hint and formally declare it end of line), and they are also not providing all the figures for the top 10 game sales, which makes analysis a little bit more difficult. The figures are from NPD, a marketing research firm that releases games console sale data every month.

The figures for US sales in April 2010 are below, ranked in order of number of sales (April 2009 figures also shown, including percentage change): 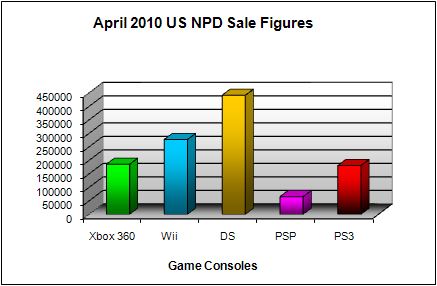 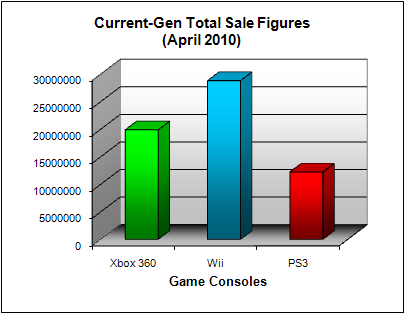 NPD Game Console Total US Sales Figures (as of April 2010)

I think the PS3 will outsell the Wii in April. This is based on the strong software numbers for March, plus the stock shortage issue being resolved finally which will give the PS3 a bump in sales. While there’s no new major PS3 exclusive in April, Super Street Fighter IV will be available, and based on the non Super version of the fighting game, the PS3 version should outsell the Xbox 360 version as well. Tom Clancy’s Splinter Cell Conviction, which is a console only exclusive for the Xbox 360 (there’s also a PC version), should do well, and God of War III should still be charting. So another good month for the PS3, with better hardware numbers, but probably slightly lesser software domination, for April.

What I failed to take into account was the Easter sales effect, and with Easter sales event coming in March this year, as opposed to April of last year, this accounts for quite a bit, but not all, of the sales drops recorded for April (compared to March). The double whammy is that while the Easter sales event happened in March, the Easter holiday period occurred in April, and so sales were further subdued as a result. And therefore, none of the consoles sold better in April than in March. The PS3 did not outsell the Wii. The PS3 didn’t even outsell the Xbox 360, but only losing to it narrowly. The game predictions were pretty much spot on, but with overall sales down 26% compared to April 2009 (21% of it attributed to Easter, probably), everything sold in fewer numbers.

The PS3 stock shortage appears to be continuing, at least when looking at Amazon. So this is perhaps one of the reasons why the PS3 isn’t dominating as it should based on recent game releases. This stock shortage has been going on far longer than it should have – I don’t know what the reasons are, but it can’t be helping Sony. PS3 sales still grew by 42% compared to the same month last year, but April 2009 was a bad month for the console, as it had the dubious record of being outsold by the PS2 during that particular month. What is more worrying for Sony is the PS2 and PSP. As mentioned earlier, the NPD has stopped tracking PS2 numbers, giving Sony a hint as to the future of the last-gen console. Perhaps it’s time Sony finally retires this ageing console, so they can concentrate all efforts on the PS3. They certainly won’t be concentrating efforts on the PSP, which has recorded yet another month of dismal sales. Recording what is the worst set of results since release, the PSP is seriously out of ideas, being outsold by the DS by almost a 7:1 margin this month, the total units sold gap between the DS and PSP has grown from 15.6 million units in April 2009 to 24.4 million just a year later.

The Xbox 360 continued to outsell the PS3, and continues to grow in a year-to-year comparison, a modest 6% increased compared to April 2009. If Sony is hoping to close the gap between the Xbox 360 and the PS3 total units sold in the US, then they’re doing about it the wrong way in regards to managing the stock shortage, and if anything, the gap has grown wider in recent month. And if Sony is hoping the PlayStation Move will help the PS3, then they have to hope Project Natal flops for the Microsoft console. E3, which will occur around this time next month, will give us a strong hint as to whether Move or Natal will dominate holiday sales based on the reception both demos get at the expo. But as long as the Xbox 360 is outselling the PS3, even if only by a small margin, Microsoft can’t be too unhappy with the results.

For Nintendo, the picture isn’t great this month. The DS recorded a huge 58% drop in sales compared to the same time last year, and even if you take into account the Easter effect, there’s still a drop in sales. The Wii continues to drop in sales, down 18% compared to last year. The Wii’s sales decline can be traced to April 2009, when it started to show signs of weakness. But the DS is still outselling the PSP easily, and the Wii is still outselling both the PS3 and Xbox 360 relatively easily, so it’s not time to panic yet for Nintendo. But they need something up their sleeves for the Wii if they want to continue to dominate after both Sony and Nintendo release their motion control systems.

On to software sales now. The month’s most popular title was Tom Clancy’s Splinter Cell: Conviction for the Xbox 360, outselling the number two title, which was also last month’s number two title, Pokemon SoulSilver, by more than a 2:1 margin. Conviction was a console exclusive for the 360. God of War III slipped to 5th place after last month’s monster 1st place finish. And as expected, Super Street Fighter IV on the PS3 outsold the Xbox 360 version, by a 1.3-to-1 margin – the previous Street Fighter game also sold more on the PS3 than on the Xbox 360. The usual Wii titles are in the mix, New Super Mario Bros, Wii Sports Resort and Wii Fit Plus, and also Just Dance, which refuses to go away. The other Xbox 360 title in 7th place was Battlefield: Bad Company 2, which outsold the PS3 version by around a 1.6-to-1 margin. Note that NPD did not provide figures for Wii Fit Plus this month, but knowing the sales numbers for the titles just above and below it, we can estimate sales at between 144,000 units and 166,000 units. For the sake of compiling market share percentage figures, sales for Wii Fit Plus can be  estimated to be 155,000, and if using this figure, the Wii games had 32.5% of the top 10 with 4 entries, closely followed by the Xbox 360 games on 31.2% for just two titles. The PS3 had two titles in the top 10, with 15.5% of the top 10 units sold. The two Pokemon DS titles accounted for the rest. It was interesting to note that both Final Fantasy versions not only disappeared from the top 10, they disappeared from the top 20 as well.

Prediction time. The PS3 shortage continues, and so it will still do poorly in sales I think, and probably outsold by the Xbox 360 with the hardware sales order remaining the same as this month. On the software front, the Xbox 360 version of Red Dead Redemption should be the top seller, with the PS3 version closely behind. Alan Wake, the much hyped Xbox 360 exclusive, should be in the top 10 as well. There might be room for the PS3 exclusive 3D Dot Game Heroes as well. Along with the usual Wii titles, the new Super Mario Galaxy 2 should rank in the top 10 as well. Overall sales should pick up compared to April, but probably still down year on year at least for the hardware figures.

This entry was posted on Monday, May 17th, 2010 at 5:30 pm and is filed under Nintendo Wii, Wii U, Switch, NPD Analysis, PS3, PS4, Xbox 360, Xbox One. You can follow any responses to this entry through the RSS 2.0 feed. Both comments and pings are currently closed.