This is another regular feature that I might run on this blog. Every month, marketing research firm NPD releases sales figures for game consoles (including portables).

The figures for US sales in September has just been released, and here they are: 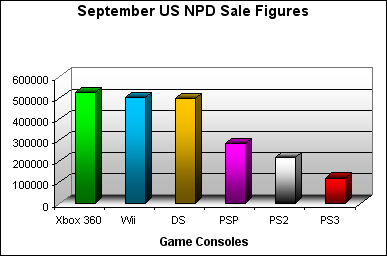 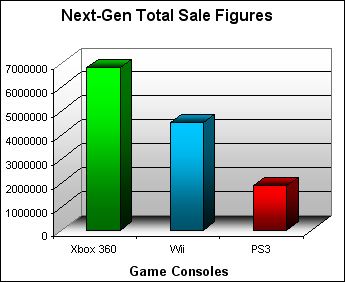 You don’t have to be a rocket scientist to know that the PS3 isn’t doing too well at all. Some have claimed that the PS3 is selling at the same rate as the Xbox 360 when it first came out last year. But this isn’t 2006 anymore – back then, nobody cared about “next-gen” or HD gaming. And sales figures are only worthwhile when you compare them to that of your closest competitors. With that in mind, September saw the Xbox 360 grab  46% of the next-gen market share, the Wii was close at 44.6% and the PS3 way behind on 10.4%. Of course, September was an exceptionally good month for the Xbox 360 due to the release of Halo 3, so sales of the console will drop in the coming months. Looking at total sales figures, the Xbox 360 still leads with 51.6%, the Wii at 34% and the PS3 at 14.2%. Sony has gone from a 80+% domination of the previous-gen market with the PS2 (which is currently still doing very well) to a minuscule share of the next-gen market and this must be worrying for Sony. The only consolation is that since the PS2 is still doing well, when it is finally discontinued, there might be a large group of upgraders to the PS3. But this is still a long time away, and there is no guarantee that these PS2 users will all grab themselves a PS3, considering many of them might have already gone down the Xbox 360 route. Cheaper PS3’s will help, but when price is the only factor, the Xbox 360 and Wii are both still in a more advantageous position having been released for longer, selling in greater numbers and have the greater chance of discounting. And obviously, the number of quality games for the Xbox 360 is what is really driving sales, and with the highly rated Mass Effect Xbox 360 exclusive coming out in November, the holidays period looks like a good one for the Xbox 360.

In the portable market, the PSP continues to sell well, even though the Nintendo DS is still selling at a 3:2 ratio. I’m sure Sony would be much happier if the PSP and PS3 sales figures were reversed, but the PSP, Sony’s first portable game machine, is holding it’s own against portable heavyweights Nintendo. The reason why the PSP is doing so well might come down to the fact that the Nintendo DS isn’t really competing on all fronts with the PSP – the DS cannot match the PSP’s music and movie playback capabilities, for example, and if Nintendo’s “games first” philosophies stay true, it’s unlikely that their next portable will be able to compete in these areas either.

This entry was posted on Monday, October 22nd, 2007 at 4:45 pm and is filed under Gaming, Nintendo Wii, Wii U, Switch, NPD Analysis, PS3, PS4, Xbox 360, Xbox One. You can follow any responses to this entry through the RSS 2.0 feed. Both comments and pings are currently closed.