Welcome to the final month of 2018. Where has it all gone? Or is it a case of “why did it take so long”? Regardless of which side you’re on, I think it’s safe to say that the fact that I’m talking about the calendar means I really don’t have anything more interesting to write in this intro, so I guess it’s best I just move on to the news, right? 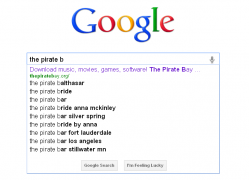 In case you need another reason as to why copyright take-down regimes are a bad idea because they’re too prone to abuse, well, I have another one for you this week. It appears that scammers have found a way to game Google’s anti-piracy demotion system in order to get malicious websites to rank higher for popular piracy related keywords.

The ingenious scheme involves sending bogus copyright take-down notices to Google, pretending to be well known entities such as Steam or Ubisoft, to remove game piracy related links from the rankings. To be fair, the links they’re asking to be removed do contain pirated content, and so any legitimate take-down notices containing the same links would have been removed. But the intentions behind these take-downs are not quite right, it seems, as with the real piracy links removed from the search results, the fake ones, the ones with malware, are now occupying higher positions on the search results and allowing the scammers to profit.

The scammers have obviously done their homework too, as they’ve submitted “DRM” take-downs, as opposed to the normal DMCA ones. DRM take-downs on Google do not allow the website owner to file a counter-claim, to defend their position (or to inform Google that the take-down notice was a fake one to begin with), and so the scammers have found a great way to get what they want without anyone being able to do anything about it. Many of the removed URLs do contain DRM breaking tools (cracks for games), but many do not.

But since this news story has been making the rounds, it seems Google have wised up to this little trick, and they’ve started flagging some of the take-down notices as potentially fake, although the removed URLs remain removed for the present.

This Christmas may be all about 4K, according to a new report by consulting firm Futuresource. The report shows that, with the average price of 4K UHD TVs now down to about the same level as a standard HDTV, adoption of these ultra high definition sets are speeding up. Global shipment of UHD TVs are expected to exceed 100 million units globally, with China being the biggest market. Even the pricier HDR enabled sets are selling well, roughly half of UHD TVs sold are now HDR capable.

Standalone Ultra HD Blu-ray players are also increasingly popular, with this year doubling the number of units sold previously, and along with that, $360 million in UHD Blu-ray disc sales.

Streaming still remains the most popular way for people to obtain 4K content though, and by streaming, it mostly means Netflix at the moment. 4K broadcasts, on the other hand, remains rare. There are still some issues to be resolved in regards to broadcasts standards, and this may mean a lot of 4K UHD TVs are already obsolete (or require a very “last decade” solution, like a set top box, for future compatibility). For now, OTT (ie. streaming) still easily beats OTA (over-the-air), when concerning 4K.

And on that note, we end the first WNR of December, and one of the last of 2018. See you next week.

This entry was posted on Sunday, December 2nd, 2018 at 8:10 pm and is filed under Copyright, Electronics, Gaming, High Definition (Blu-ray/HD DVD/4K), Movies, News Roundup, PS3, PS4, Video Technology, Xbox 360, Xbox One. You can follow any responses to this entry through the RSS 2.0 feed. Both comments and pings are currently closed.