BAM! A new game app, made by yours truly, out of nowhere! Other than the fact that I mentioned it way back in September, and then again in December … I guess you can say I had tiny bout of development slippage. But better late than never I suppose.

What’s it about? Well, unlike my last effort, this one actually has something to do with what we talk about here and on Digital Digest in general. One of the most absurd things about current copyright laws in the U.S. is the notion of statutory damages. It’s the law that awards up to $150,000 in damages per work. It made sense when it was about commercial piracy, one company ripping off another for commercial gain, but applying it to personal usage piracy or when there’s little commercial intent, is just ridiculous. From Jammie Thomas-Rasset‘s $1.92 million damages, to Joel Tenenbaum, to outrageous damages claims of $75 trillion. It’s the very thing that magnifies the actual cost of piracy, scares politicians into taking drastic actions, encourages law firms to scare people into paying “pre-trial settlements”, and helps to fuel the ongoing crusade against piracy. 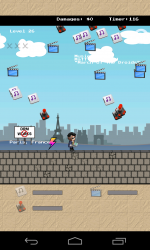 Pirate This! is my crappy little app (that somehow still managed to cost me over $1,000 to develop) that aims to highlight the unfairness of statutory damages by making a game out of it. You play as a “typical” web pirate, ‘downloading’ and ‘uploading’ music, movies and games. The aim? To “bankrupting the world, one download at a time’, as you try and increase the amount of damages being awarded against you, with 30 levels to notch up as much total damages as possible. It’s a short game (I have some additional content on the way though), but a game with a message. Apptivism, if you will.

So if you think current copyright laws are wrong, then you should buy my very reasonably priced ($0.99) app. If you don’t like the way ordinary citizens, whose only intention are to listen, view or play content, are being forced to pay thousands and more for downloading something that may have cost less than a cup of coffee, then buy the app (which also costs less than a cup of coffee). If anything you read here makes sense to you, then buy the app. Tell your friends, your family, even your enemies, and get them to buy a copy too. And then buy another two copies for yourself,  just to be safe. And if you manage to grab a pirated version of Pirate This online somewhere, that’s fine too.

Pirate This is currently available on the Google Play store and the Amazon Appstore for the Android platform, both DRM free (well, as much as each platform allows for anyway), and will be available on the Apple App Store soon for your iOS devices (currently waiting on the standard app review process).

And on that note, we come to the end of another weekly news … oh wait, we haven’t done the news thing yet, have we? OK, here we go …

Most people don’t like DRM (well, I don’t), but we’ve largely had to live with it. What if not only do we have to live with it, we have to sit on it as well? That is perhaps the rationale behind the design and creation of the world’s very first DRM chair.

Clever in its simplicity, the DRM chair uses a simple sensor to count how many times it has been sat on. Once it reaches the usage limit (8, in this case), the chair disassembles itself via electrically melted wax joints. There’s a video in the link above where you can see it in action – all 8 times, before the DRM kicks in.

A chair with DRM. At least it’s not “always-online”!

I hear you saying, technically, how can something analogue like a chair employ *digital* rights management? It’s true, and ironically, the only piece of digital-ness in the whole thing is the DRM system itself. Maybe that was the point the designers were trying to make though, with the project borne out of the brief to re-think “the world as we know it”, as part of The Deconstruction global design project/competition. And I think the DRM chair fits the brief quite effective, asking us to re-think the way DRM has infested our everyday digital lives, how we’ve come to live with it like some chronic incurable disease, even though its very premise is something quite alien to us in terms of our everyday dealings (like with chairs, for example).

And as frustrating as a chair that falls apart after only 8 sittings is, you know the good folks in the game publishing industry can always come up with something even more annoying. So when EA decided to go with the “always-online” route for the latest incarnation of SimCity, the only question was whether they would learn from the mistakes of Blizzard with their botched Diablo III launch or not.

“Or not”, as it happens, as SimCity’s launch was a complete disaster, and possibly even worse than the Diablo III debacle. Gamers were not only met with “server busy” error messages when they tried to play their $60 game, the whole waiting for a free spot thing was made as annoying as possible by essentially having no queue, with only a timer that re-tries a connection every half-hour (at which time, the server might still be busy). Even those that managed to log on were sometimes kicked off due to server problems, sometimes with hours of work wiped out as all saves are online based. 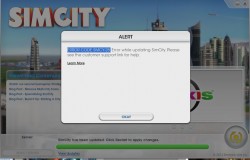 SimCity is a series of error message dialog boxes, and also a game in there somewhere

A good DRM has to be invisible, and while it’s admirable that the developers of SimCity tried their best to add value to the always-online requirement, the end result is still a DRM that ruins all the hard work that was put into the game. A good DRM also needs to be field tested, as I’m sure the game is great when used on the mostly empty servers during beta testing.

It’s the little things that can makes gamers feel they’re being punished for some reason. For example, if there are online only saves, why not have a temporary offline save that can be queued for later upload if the servers are down? And if it’s not viable to have a full offline mode, then why not have a limited offline mode (a series of complex offline tutorials for example) that might keep users occupied while they’re waiting for a free server. Hell, even a mini-game might have helped!

Of course, all of this could have been avoided if EA had invested as much effort in traffic management as they did in coming up with ludicrous DRM!

From a DRM chair that nobody would really want, to a chair that everyone wants so much that they take part in what’s commonly referred to as a Game of Thrones. Yes, lame segue, but there you go. Game of Thrones is no stranger to the WNR. Not only is it one of my favourite sources of violence and gratuitous nudity (not to mention awesome storytelling and characters), it’s also very much linked to piracy.

HBO isn’t a stranger to piracy either, and that’s mainly because their shows are some of the most pirated around. Their shows are pirated a lot because they make great shows, and also because not everyone can afford (or want to have) an HBO subscription. And without a cable/HBO subscription, it’s hard to source their shows legally from elsewhere, at least for the new episodes. That’s a perfectly fair thing to do though, as that’s their business model, and everyone should hope they continue to make money so they can continue spend it on shows like Game of Thrones. But the problem arises when access to a HBO subscription isn’t possible, or you simply want to give money to HBO without having to have a cable subscription (eg. via iTunes). Or it’s like in Australia, where once upon a time you had to pay the best part of $80 per month just for the pleasure of watching an episode a week after the same season has already ended in the U.S.

These artificial delays are a real piracy promoter. Most reasonable people are willing to wait a short time, say 24 to 48 hours. But a wait of weeks or months is not reasonable, and so it’s unreasonable to expect people to not seek alternative sources for the same content. Whereas once upon a time I might have pirated episodes of The Walking Dead, now, I watch the 33-hour delayed version on what amounts to basic cable here in Australia. It’s a delay I’m willing to live with, and the added value of not doing anything illegal, HD video, 5.1 surround sound and closed captions more than makes up for the delay and the annoying ad-breaks.

Which is why HBO’s anti-piracy policy for the upcoming season will see the network trying to remove artificial barriers and delays as much as possible. A noble effort, but I think one that will still ultimately mean a lot of pirated downloads. HBO shows are a premium commodity, and a lot of people, rightly or wrongly, just can’t justify spending so much in order to watch a TV show. I’m not saying this is right, it isn’t, but that’s the reality, and that’s what drives piracy ultimately. But for those that can afford it, and are now able to pay for it and receive the latest episodes in a timely fashion thanks to minimal artificial delays, then do it and keep HBO going strong!

With The Pirate Bay constantly on the lookout for a new refuge, as the Javert-like anti-piracy agencies pursue the Jean Valjean-like website across the vast digital landscape (sorry, just had to jump on the Les Misérable hype bandwagon), the website may very well have just found a new sanctuary: North Korea!

The irony of the situation wasn’t lost on The Pirate Bay, as it seeks the freedom to freely distribute information in a country where that very freedom is very much not a guaranteed type of thing, but their blog post described this as a necessary evil in their battle against US corporations.

Apart from the fact that the daily traffic of The Pirate Bay probably equals the yearly traffic for the entire Democratic People’s Republic, this story also failed the smell test on many other fronts, for many others. Including one blogger who went on to ruin it for everyone by confirming this is most likely a case of clever IP spoofing. Oh well, it was fun while it lasted.

Still, it would have been fun to see the RIAA/MPAA go after the North Korea government owned ISP that may have hosted The Pirate Bay. I’m thinking the DPRK government probably doesn’t respond too well to lawsuits.

And so that’s another WNR. The lessons learnt? Don’t buy the DRM chair. Don’t buy SimCity. Buy a subscription to HBO if you can afford it. And most importantly, buy my Pirate This app (or pirate it, like the title of the game says).

Update 1: Despite my advice above, I did end up buying a copy of SimCity, mainly because I’m still a huge fan of the franchise, plus it was on sale. After finishing downloading the 3GB or so of files from Origin at 3am, to my surprise, both Oceania servers were still full at that time. I will try again later today.

Update 2: I’m taking the next weekend off and going on vacation (for the first time in 7 years). So the WNR won’t be posted at a later time (most likely next Tuesday or  Wednesday).

This entry was posted on Sunday, March 10th, 2013 at 4:17 pm and is filed under Copyright, Gaming, High Definition (Blu-ray/HD DVD/4K), News Roundup. You can follow any responses to this entry through the RSS 2.0 feed. Both comments and pings are currently closed.