Welcome to the August 2011 edition of the NPD US Video Game Sales Analysis, where we look at video game sales, both hardware and software, for the month of August 2011 based on data collected by the NPD. Half way through August, Sony surprised the market with a $50 price cut for all of its PS3 models, and so for the first time, we can actually analyze the effect of this price cut and see if it allows Sony’s PS3, languishing in third place amongst the home based consoles, to make a much needed comeback.

As NPD no longer releases full hardware sales figures, this feature is reliant on the game companies, namely Microsoft, Nintendo and Sony, to release their set of figures and based on “statement math” (that is, arithmetically calculate missing figures based on statements made). For August 2011, these are the statements made by the gaming companies:

Knowing both the Xbox 360 and Wii hardware numbers, and also knowing that the Xbox 360 held 43% of the home based console market share, the PS3 hardware sale is calculated to be an estimated 218,000 units.

And so the figures for US sales in August 2011 are below, ranked in order of number of sales (August 2010 figures also shown, including percentage change): 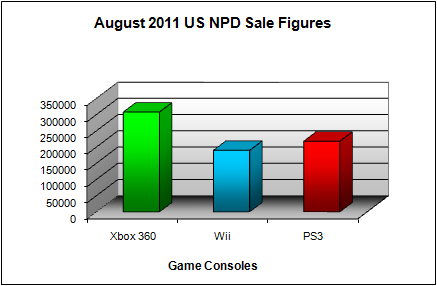 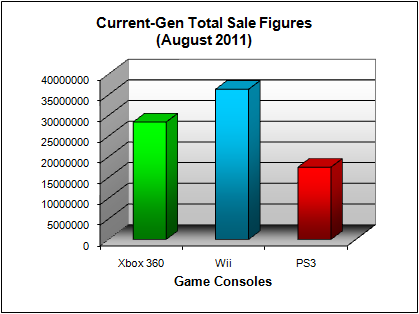 NPD Game Console Total US Sales Figures (as of August 2011)

With the PS3 price drop coming in just a few days ago, this is just the sort of major event that makes predictions extremely difficult. There’s no doubt in my mind that the PS3 won’t come last again (Wii has the third spot amongst the home based consoles locked up), but the main question is can the PS3 outsell the Xbox 360? The price cut being only $50, and with no new console coming with the price cut like two years ago, maybe it will just come short, but it will be a close run race that’s for sure. For games, again, there’s nothing really of note. Usually at this time of the year, Madden NFL dominates, but with the Madden NFL 12 coming at the end of August, it may not have enough time to make such a major impact this time, although it will probably still be the best seller based on pre-orders alone. No More Heroes: Heroes’ Paradise for the PS3 and Deus Ex: Human Revolution seems to be the only two other notable releases in August.

The PS3 didn’t come last, and the Wii did, but this was an easy prediction to make. But it appears I overestimated the effect of the $50 price cut, and with Xbox 360 sales growing compared to July, the race wasn’t a “close run” one at all, with the Xbox 360 still comfortably retaining first place amongst the home based consoles.  For software, Madden NFL 12’s delay meant that it was not even included in August’s stats as it fell outside of the NPD August sales window (August is counted as a 4 week reporting period by the NPD, lasting from the 31st of July to the 27th of August), while of the two notable new releases, Dues Ex: Human Revolution was predictably the top selling title.

Let’s focus first on the PS3 numbers, and just how much of an effect the $50 price cut has had. On the surface, it looks like the effect was minimal, but dig a little deeper, and the sales bump will seem a bit more robust. Since the price cut only occurred half way through August, the first thing we need to do is to establish a marker for pre price cut sales. Generally (and historically) speaking, there is very little difference between July and August sales, but August tends to sell a few more consoles than July. Since nothing dramatic actually occurred for the Xbox 360, and the only effects being negative (due to price drop of PS3, encouraging more gamers to buy the PS3 over the Xbox 360), the rise of 360 units from 35-day reporting period of July to the 28-day reporting period August 0f roughly 11% could indicate “normal” seasonal growth.

Or not. So let’s take half of this number and say that, had the PS3 not had a price cut, it too would have grown 5.5%. This would make PS3 sales roughly 156,000 units for the whole month of August, or 5,571 units per day, had the price drop not occurred. The price cut was announced on the 16th of August, and so leaving the price cut only 12 days to affect the August NPD figures (again due to the premature end of the NPD reporting period at the end of august), with the first 16 days of the month “business as usual”. This means that prior to the price cut, 89,143 PS3 units were sold, leaving 128,587 being sold after the price cut. This means an increase from 5,571 units per day to 10,716 units per day (127,587 divided by the 12 days of the price cut) after the price cut, practically doubling sales as a result. This means that had the PS3 price cut lasted for the whole 28 day reporting period, PS3 sales would be almost exactly 300,000 units, only 8,000 units shy of the Xbox 360. Had I simply assumed that PS3 sales would have stayed completely flat between July and the first 16 days of August, PS3 unit sales may have reached as high as 311,000 units.

For the Xbox 360, a solid 11% rise from July to August allowed it to sit comfortably as the best selling home based console, but as noted earlier, it could have been different if the PS3 price cut had come earlier. Hardware sales are down some 14% compared to the same month last year, but again, this is mostly due to the “Slim” sales bump back then.

For the Wii though, August was just as bad as July, and it looks like from this point onwards, it will be third place out of three.  The Wii declined the most compared to August 2010 than any of the other consoles, which means that the rumours surrounding the rushing of the Wii U to market, and the “development hell” (source: n4g.com) that ensues, might show Nintendo is more worried about the Wii decline than they’re letting on.

For game sales, August was a disappointing month, due to the lack of new releases, and the delay of Madden NFL 12 to the September reporting period. So Deus Ex: Human Revolution was actually best selling title across all platforms, even though it was only released for 5 days in the August reporting period. The ‘Just Dance’ franchise continues to be the best selling Wii exclusive titles, but in better times, a Nintendo first party title, like Mario Kart (now bundled with consoles) or Wii Play would have been one of the titles. Here’s the full software sales chart for August:

Time to make a prediction. I think the Xbox 360 will still come out as the top selling console for September 2011, mainly due to ‘Gear of War 3’, but the PS3 will definitely come closer than it did this month, and with ‘Resistance 3’, it too might benefit from a platform exclusive. The Wii will be third. Games wise, ‘Gear of War 3’ looks set to be a top seller, despite being a platform exclusive release. ‘Resistance 3’, on the other hand, doesn’t look to have the same effect, although it will still sell well. Combined platforms sales may even push ‘Dead Island’ to the top of the charts.

This entry was posted on Tuesday, September 13th, 2011 at 7:12 pm and is filed under Nintendo Wii, Wii U, Switch, NPD Analysis, PS3, PS4, Xbox 360, Xbox One. You can follow any responses to this entry through the RSS 2.0 feed. Both comments and pings are currently closed.