It’s August already, and we’re quickly approaching the holiday season. This holiday season is even more interesting because we have new motion gaming accessories from both Sony and Microsoft, both wanting to challenge Nintendo’s dominance in the casual gaming market. With the PlayStation Move being released in September, and Kinect in November, the months before is all about building enough momentum and hoping that the new accessories help one console get over the line, in terms of being the most popular console during the holiday season. And unlike last year, there are no signs pointing to a clear winner for this holiday season – any of the home consoles can win it – so it’s even more important to have a good August and September to lead up to the crucial October, November and December months. The figures are from NPD, a marketing research firm that releases games console sale data every month.

The figures for US sales in August 2010 are below, ranked in order of number of sales (August 2009 figures also shown, including percentage change): 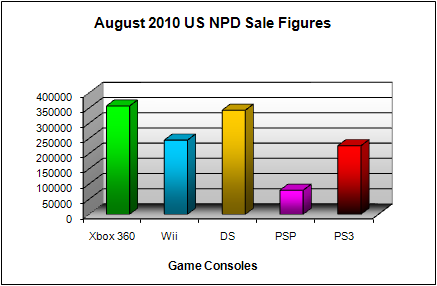 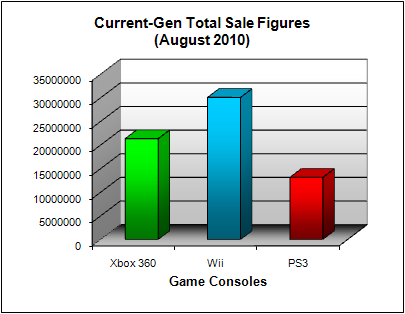 NPD Game Console Total US Sales Figures (as of August 2010)

Looking at the Amazon charts, the new Xbox 360 4GB isn’t actually doing fantastically, and it’s being outsold by the 250GB. So while most people are predicting that it would be another month where the Xbox 360 rules, I’m not as certain. I think sales will do well, but it might be the case of things being very close, with the new 4GB probably just allowing the Xbox 360 to sneak to top spot. In games, NCAA Football is usually followed by Madden NFL, the 11th version, and that will always do well. But otherwise, it’s another slow month before the busy holiday period begins, so the top 10 should look pretty familiar.

Well, it was pretty close at the top, but the Xbox 360 still managed to beat the DS by 14,000 units, even as it recorded a month to month drop. And the top two were Madden NFL titles, but that wasn’t hard to predict (although there were some surprises here too, more on that later). And I was right too about it being another slow month, as sales dropped compared to July.

As mentioned above, the Xbox 360 was the most popular console for August, that’s two months in a row, and only the Wii or the DS has ever managed to do this. The new 4GB didn’t help the Xbox 360 record growth compared to July, but it did help to secure first spot. One should not underestimate the importance of these last two month’s victories for the Xbox 360, and of course the new form factor for the Xbox 360, which has finally allowed it to become as “sexy” an item as the PS3, possibly more so depending on who you ask. Plus the increased stability finally allowed Microsoft to put the whole RRoD business behind them. And all in time for Kinect too!

Last month, I mentioned that this month would be important for the PS3. For the first time, we can have a year on year comparison that compared the PS3 Slim to the PS3 Slim (and to the post price-cut PS3 sales figures). Of course, the Slim and price cut was launched in the middle for August last year, so we will have an even better comparison next month. But looking at the PS3 figures, while it still managed a year-on-year growth, but it was only 8%, compare and contrast to the 76% last month. And this could very well mean that PS3 sales would actually drop, year-on-year, next month, although that depends on whether the PS Move shifts any consoles along with it or not (bundles and otherwise). But a drop is not necessarily a bad result, it just means that it’s unfair to compare the post Slim/price cut bump to what is now a normal level of sale for the console. Just like it would be silly to compared  Xbox 360 sales 0f July 2011 with July 2010, due to the post Xbox 360 “Slim” sales bump. And the PS3 was the only console to manage a month to month growth in August, I guess largely thanks to the stock issue finally clearing up completely, so thing are still looking good for the console (and even better overseas, but that’s beyond the scope of this analysis). The less said about the PSP the better.

For Nintendo though, the news remains bad. The Wii is very close to dropping to the third most popular home console (that’s last place, btw), and DS sale has started to drop, perhaps reaching market saturation (although the 3DS will help, a lot, and its only competitor is the PSP, which is doing quite awfully). But with both Microsoft and Sony bringing out their motion gaming devices, it’s not looking good for Nintendo. The low tech nature of the console, which made it an affordable, profit making piece of hardware, and was largely fine for casual games, may finally have caught up with the console – so expect the Wii 2 sooner than later, as the Wii just doesn’t have the longevity of the other two home consoles. And regardless of which camp you’re in, whether you think Kinect will win, or the Move will, what is clear is that both seem better pieces of tech than the Wii. Whether their games will be as good as the best Wii games, remains to be seen, but you can’t argue that both are innovative enough (Kinect with the controller-less interface, Move with its super accuracy) to cause Nintendo concerns, at the very least.

Onto software now. As expected the Xbox 360 and PS3 version of Madden NFL 11 were the top selling titles, in the described order. What some commentators concentrated on was the surprising lack of a gap between the sales figures of the two versions, despite the advantage in hardware units the Xbox 360 enjoys (1.6:1). The actual software advantage was only 1.235:1. But this is actually up on last year’s 1.231:1 ratio. Another multi-platform release was Mafia II, and again the Xbox 360 version outsold the PS3 version, but by how much, we don’t really know because NPD no longer provides sales stats for anything other than the top 5 titles (Mafia II for the PS3 was 7th). Super Mario Galaxy 2 for the Wii was third, and fifth place was occupied by another Super Mario game, New Super Mario Bros. for the DS. The Wii version of New Super Mario Bros. was also in the top 10, with Wii Fit Plus making a return too. For the Xbox 360, Modern Warfare 2 stayed in the top 10 (related to the upcoming Black Ops game, perhaps), and last month’s top title, NCAA Football 11 also remained in the top 10.

Prediction time. September = Halo Reach. That’s what next month will be all about. The fact is that, as I type, the top four items in Amazon’s Video Games section are all Halo Reach related (standard, limited, legendary editions, plus the 360 Halo Reach console bundle), just shows how dominant it will be in September’s figures. So expect the Xbox 360 to remain on the top of the console pile hardware wise too, and possibly the best month since, well, the last Halo release. Halo Reach will overshadow Sony’s launch of the Move unfortunately, although it’s doing well to just hang in around 10th, or just outside of it. The Sports Champions bundle should be counted in the software charts (in the same way Wii Fit Plus is in there), so it should be in the top 10 (especially when the top 3 will be condensed into a single entry for Halo Reach). It will be a very interesting month, I feel.

This entry was posted on Saturday, September 11th, 2010 at 9:43 pm and is filed under Nintendo Wii, Wii U, Switch, NPD Analysis, PS3, PS4, Xbox 360, Xbox One. You can follow any responses to this entry through the RSS 2.0 feed. Both comments and pings are currently closed.