We’re back! Well, for this month anyway. Following last month’s lack of PS3 numbers because Sony didn’t want people laughing at the fact that PS3 sales was actually negative for the month (Not Intended To Be A Factual Statement), the monthly NPD analysis had to be temporarily suspended. But we’re back, stronger than ever this month (erm, sort of), largely thanks to PS3 numbers not being so miserable that Sony decided to release some numbers again. It still didn’t really matter because the Xbox 360 still solidly outsold the PS3, but to be fair to Sony, given the month they’ve just had, everything looks like good news these days. For those that are new to this, this analysis looks at US video games sales figures compiled by NPD, unreleased by NPD due to pressure from the gaming companies, but then leaked by various sources, including gaming companies, if/when it suits them.

The figures for US sales in April 2011 are below, ranked in order of number of sales (April 2010 figures also shown, including percentage change): 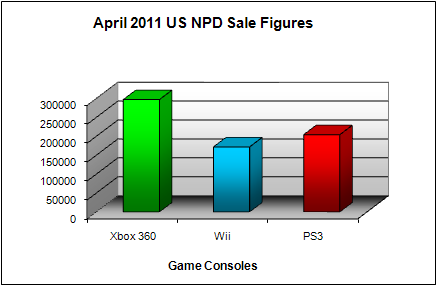 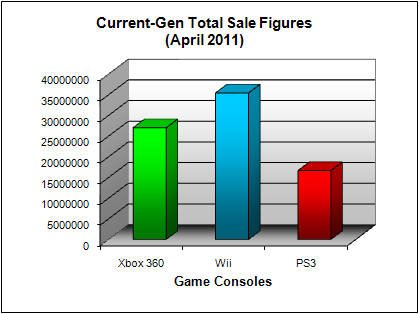 NPD Game Console Total US Sales Figures (as of April 2011)

Note that some of the figures above are extrapolated, and somewhat based on guestimates. For example, I gave Sony the benefit of the doubt and gave the PS3 350,000 units sold for last month, so I could have an estimate for the total sales figures graph. And this month, Sony only said that the PS3 grew by “nearly” 13% compared to April 2010, and so I again gave them the benefit of the doubt and made the growth exactly 13%. But these figures have always been rounded up and down, and so they’re not that accurate, but accurate enough in terms of providing a general feel of what’s going on, allowing “analysts” like myself to extrapolate the data and make things up, basically.

So the Xbox 360 was the winner again, just like last month (the PS3 numbers weren’t present, but the Xbox 360 and Wii numbers were present, and presented in the gaming section of the April 24 edition of the Weekly News Roundup). In fact, Xbox 360 sales are 60% up compared to the same month last year, which is quite a result. This makes for the best month-to-month-a-year-ago result since last November, when the Xbox 360 recorded 67% growth. It’s hard to explain where the result comes from, but (and this is where the “make things up” thing comes in), with software sales higher than in April 2010 thanks to some a-list releases, and most of them, while being multi-platform, sold better on the Xbox 360 than any other console, and this probably helped hardware sales as well. Microsoft also said that Kinect sales were promising, with Michael Jackson: The Experience the pick of the Kinect new releases for the month.

And as mentioned earlier, the PS3 numbers were good enough for Sony to release figures for this month. This time last year, the Xbox 360 and PS3 were neck and neck (with the Wii way ahead in the lead … more on that later), but the Xbox 360 managed to outsell the PS3 comfortably this month, despite the PS3’s “near” 13% growth figure. Sony would point to this figure showing that the PSN outage for the last ten days of April did not really have a profound effect on sales, but we’ll only know the full scale of the damage in May’s NPD (no doubt if the numbers don’t go well, Sony will withhold the figures again, so we may never find out), when it is revealed that millions of PSN account details and some credit card numbers were leaked. Various sources are already posting information which shows increasing number of PS3 to Xbox 360 console trade-ins at retailers, an increasing number of gamers switching pre-orders from PS3 versions to Xbox 360 versions (for those that presumably owns both consoles), and Sony’s share of game sales dropping from 37% from before the PSN outage, to only 21% with the most recent data.

The Wii was the worst performer out of the home based consoles this month, with sales being 38% down compared to the same period last year, a somewhat consistent decline. Which is probably why the Wii has just received a price cut, and that Nintendo plans to announced the Wii 2 at E3 in less than a month’s time. Nintendo’s other consoles, including the new 3Ds, aren’t doing much better though, with the original DS once again outselling the more expensive 3Ds.

For games, Mortal Kombat was the best seller, followed by Portal 2. Mortal Kombat sold 900,000 copies on the two platforms, the Xbox 360 and PS3, on which it was released, and the Xbox 360 version most likely led the PS3 version in sales (as otherwise Sony would have mentioned that the top selling game of the month did best on their platform). Same with Portal as well, according to GfK-ChartTrack, despite the PS3 version having several exclusives, including a free PC version of the game, plus cross-platform gaming (according to released figures, the Xbox 360 version outsold the PS3 version by about a 1.5-to-1 margin). Michael Jackson The Experience also made the top 10, despite only the PS3 Move and Xbox 360 Kinect SKUs of the game being new in April (the other SKUs were released ages ago). Another game that didn’t make the top 10, but would have if a bundled version had counted as software, as opposed to accessories, sales was SOCOM 4. The “Full Deployment” bundle consisted of a Move controller and the Sharpshooter accessory, and had this bundle been included in the software numbers, SOCOM 4 would have made the top 10. As it is, the bundle was the highest ranking new accessory for the month. Here’s the full software sales chart for April:

I don’t really want to make a prediction next month, because if I’m right, and that the PS3 number falls due to the PSN outage, then Sony won’t release the figures, and we don’t have an NPD. Regardless, I think the Xbox 360 would still be the top selling console, so it’s just a matter of how much the PSN outage hurts the PS3, and how much the Wii price cut helps the Wii. The biggest game new releases for May are L.A. Noire, Brink and LEGO Pirates of the Caribbean.

See you next month, hopefully.

This entry was posted on Saturday, May 14th, 2011 at 3:46 pm and is filed under Nintendo Wii, Wii U, Switch, NPD Analysis, PS3, PS4, Xbox 360, Xbox One. You can follow any responses to this entry through the RSS 2.0 feed. Both comments and pings are currently closed.