After an Oceans 11 style heist, a global computer hacking effort, blackmailing and some downright shameless begging, and I am able to bring you this month’s NDP US video games sales stats. Either that, or it was leaked in the same way it’s been leaked in the last few month. December is the busiest month of the year in terms of video game sales, and all eyes on whether the Xbox 360 (and Kinect) can triumph over the Wii, or will the PS3 stage a comeback of epic proportions. Read on to find out! All the figures are collected and calculated by NPD.

The figures for US sales in December 2010 are below, ranked in order of number of sales (December 2009 figures also shown, including percentage change): 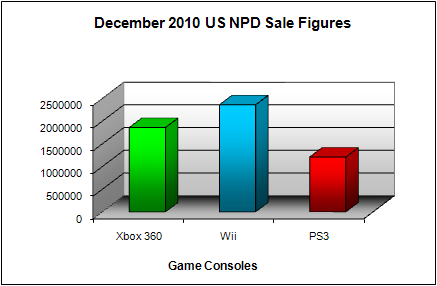 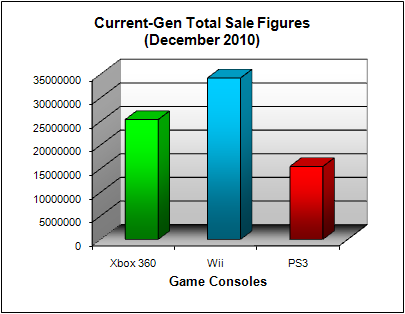 NPD Game Console Total US Sales Figures (as of December 2010)

I’m going to go with the same hardware ordering as this month, although the shortage of Xbox 360 and Kinect stock could affect sales somewhat, with the more plentiful Wii taking advantage. Software wise, a lot of the same titles from the above list will be there, and it will be joined by Epic Mickey, possibly a Kinect title or two (Kinect Sport being the most likely candidate). GT5 will have risen in the rankings too thanks to it having a bit more time to sell more copies.

Well, if you believe Microsoft’s statement, then yes, the Xbox 360 stock shortage did affect US video game sales, and this allowed the Wii to come first in home console sales for the first time since May. The software predictions are more a mixed bag, or rather, I think  I only managed to get the Epic Mickey thing right (GT5 didn’t even make the top 10).

First of all, the Wii’s win this month seems to indicate that there’s still life left in the old motion controlling dog yet. While December was the best month for the Wii since, well, last December, but as you can see above, sales are actually down 38% compared to the year before. This seems in-line with the general percentage decline for Wii sales over the year, but it’s not as bad as it seems because last December was simply an amazing month for the Wii, far above expectations actually. In fact, the Wii in December 2009 was up an amazing 77% compared to December 2008 (which itself was up 59% from 2007), that’s far above normal. And so Wii sales actually grew compared to 2008, not by much, but it’s not bad for a “dead” console as critics (me included) have called it. It just goes to show that the Wii really is still the king when it comes to the holidays.

The Xbox 360’s streak as the top selling home based console ended in December. Microsoft was quick to blame stock shortages, and there definitely were stock related issues with the Kinect accessory. But is Microsoft really saying that, had stock been plentiful, it would have sold at least 500,000 more Xbox 360’s (to only just match the Wii numbers), basically that half a million people that wanted to buy Xbox 360’s couldn’t do so because all the stores had run out? That seems a bit far-fetched to me. In any case though, the Kinect accessory was a top seller, with more than 5 million sold, and 8 million shipped to retailer since its release in November, and I can see it driving console sales over the next few month. But in any case, the 1.86 million Xbox 360’s sold in December represents the best ever month for the console, and it was the only console to record a year-on-year growth (of 42%, which is quite impressive).

The PS3 again was unable to outsell the same month last year, coming in with a 11 percent decline compared to December 2009. It is kind of disappointing in that Move clearly did not help to sell more console, and that while last year’s better sales results were somewhat due to the introduction of the Slim, the price cut, and the higher price of Blu-ray standalones back then (which made the PS3 a good value choice for those also seeking a Blu-ray player – not so this year, considering you can now pick up a brand name player for peanuts), Sony should still have recorded some growth, or at least no decline, this year. Sony was quick to point out that they’ve had a great year with PS3 software sales, up 32% compared to last year, but they were in last place (of the home consoles) last year, and so they had the most to gain from increasing console numbers this year. In fact, from January to October’s estimated figures, the PS3 managed to overtake the Wii in terms of software sales revenue, up to second place, but it was still way behind the Xbox 360 in terms of revenue. In fact, even when you add in PS2 and PSP revenue, the PlayStation brand was still behind that of the Xbox 360, back in October. and while things could change between October and December, if anything, it should help the Xbox 360 (thanks to Black Ops) and the Wii (thanks to Just Dance 2, Donkey Kong, Epic Mickey, and Michael Jackson: The Experience). So in fact, the PS3 could still finish the year in last place in terms of software revenue.

And with that, we move onto software, and as expected, Black Ops retained the top spot for best selling game on all platforms combined (a Call of Duty game top of the charts at Christmas, what a non surprise!). To show that PC gaming is still alive, World of Warcraft: Cataclysm managed 3rd spot, despite selling only on one platform. And while the NPD no longer gives out individual platform sales, from the platform exclusives, we can see that Just Dance did fantastically on the Wii, and so did Donkey Kong Country Returns, Disney Epic Mickey and Michael Jackson: The Experience (while not a platform exclusive, this title wasn’t available for the Xbox 360 nor the PS3). So it’s been a fantastic month for Wii, but I just can’t help but feel that the type of titles selling could eventually point to a Kinect victory (and may also help the Move). Ubisoft’s dominance (Just Dance 2, Michael Jackson: The Experience) here, and Ubisoft’s commitment to Kinect (Ubisoft are the top sellers for third party Kinect games), does suggest a shifting momentum may occur. If Ubisoft doesn’t botch up the Kinect version of the Michael Jackson game, then it could be the game to really make Kinect take off. Anyway, here’s the full software sales chart for December:

I loathe to make a prediction for next month, but I think the Xbox 360 will probably gain back the number one spot, and a very familiar top 10 for software as well.

And I guess with the December numbers available, I should do some kind of year-in-review post, but with the lack of full NPD stats, it’s hard to do a full analysis, so if I do a year-in-review next week, it will probably be pretty short.

This entry was posted on Saturday, January 15th, 2011 at 2:02 pm and is filed under Nintendo Wii, Wii U, Switch, NPD Analysis, PS3, PS4, Xbox 360, Xbox One. You can follow any responses to this entry through the RSS 2.0 feed. Both comments and pings are currently closed.