Welcome to yet another WNR. I hope you’ve had a nice week. It’s getting colder now here in Melbourne, and I’m starting to see the downside of having a new Core 2 Duo – it just doesn’t generate enough heat as compared to my old computer. I published the March 2009 NPD video game sales analysis earlier in the week. It’s the first time in a long time that sales have declined, all except for the cheap Xbox 360, so the economy will affect the gaming industry, despite previous months showing otherwise.

First up is copyright news. The fallout from The Pirate Bay verdict is still being felt this week, as protesters turned up in Sweden to protest the decision. As reported last week, the fight is far from over (in fact, it’s just barely begun), so it could be years before we know the fate of TPB. IFPI, the organisation suing TPB, has had its own website under attack by supporters of TPB as well. 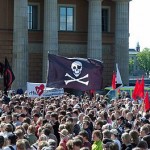 Still, even if TPB was taken down, it does not mean the end of piracy. TorrentSpy, Suprnova were all once as big as TPB, but both were taken down and torrent downloads did not cease (in fact, Suprnova was taken over by the TPB and re-launched). The only way to stop torrents is to offer a legal alternative, and it’s as simple as that. The copyright side of things apart, another problem with torrents is the amount of bandwidth it saps from networks. ISPs can deal with this by either banning of throttling P2P traffic, but this has a very negative effect on customer satisfaction. So the alternative is to optimize P2P traffic, by prioritising local based exchanges, and some ISPs are doing this to both save money and improve P2P speeds. Of course, this puts ISPs at greater risk of prosecution, not just from private companies like the MPAA, but also from governments. The German government, for example, has gotten German ISPs to agree to web filtering, which they will say it’s for inappropriate sites, but can also be used against sites like TPB. As you may know, Australia is currently debating this sort of thing and our system could be the envy of authoritarian regimes worldwide, as well as organisations like the MPAA.

The other big legal news is the official start of the MPAA vs RealDVD trial. With these types of cases, a lot really depends on the Judge, because if you get a tech savvy one that can understand the arguments put forward, then Real Networks may have a chance. If not, then the scare tactics of the MPAA will work in court very well.

Last week, I reported that the BBC is adding DRM. This week, the BBC has started broadcasting propaganda for the MPAA. Next week, the BBC commission a weekly hourly program called “The MPAA: All Hail Our New Masters”.

While this could possibly be put into the gaming section, I’ll put it here. Sony says that piracy is hurting PSP game sales. And by “piracy”, they are of course referring to the Nintendo DS. Aren’t they? Or perhaps the ease in which the Nintendo DS can be used to play pirated games, and the half-hearted effort from Nintendo to stop the act, is really hurting the PSP, which is harder to mod to make it play homebrew or pirated games. The fact that the DS is more fun than the PSP may also contribute, as PSP sales continue to drop year-on-year as our NPD analysis shows.

In HD news, the big news of the week is Warner Bros.’s launch of their new red2blu.com website. What this website allows you to do is to upgrade your HD DVD collection to Blu-ray, at minimal cost.

How it works is that you can upgrade up to 25 HD DVD titles (per household) for $4.95 each, with $6.95 charged for shipping for the entire (up to 25 disc) order. Considering that most people paid peanuts for HD DVDs, this adds up to fantastic savings, especially when you consider that people with the HD DVD versions were able to enjoy the movies in HD for a year now, and still end up paying less than the people who went straight to Blu-ray. I guess my series of HD DVD Fire Sales blog posts wasn’t a waste of time after all. I can only hope that something similar will happen in Australia (unlikely, since HD DVD did not sell that much here), because I managed to pick up lots of discs for around $3-5 each.

For those who managed to buy cheap HD DVD players before or just after the downfall and want to upgrade them as well, then cheap Blu-ray players are coming as well, according to Samsung: Sub $100 Blu-ray players will be here soon. With Samsung’s latest players, I can definitely see the trend of merging Profile 2.0 (BD-Live) Blu-ray players with online video delivery (OVD) services, such as Netflix, so instead of getting the ultra cheap players, it may be wise to wait a bit see what develops in this area. OVD is growing at an extremely fast rate, thanks to deals with gaming and consumer electronic firms that adds integration into hardware devices like the Xbox 360 or Blu-ray players. Amazon is getting into the game as well, now with HD video service added to support Roku, TiVo and other compatible devices. Watch this space.

Plasma TVs are becoming rarer and rarer, now that Pioneer has pulled out of the game and that their beautiful Kuro range will be discontinued soon. But Panasonic is still sticking with the format, and for good reason: Plasma still wins on quality, if not so much on price or energy efficiency. Panasonic’s new THX certified plasma range looks like the perfect way to replace the Kuro. I was all ready to go LCD after reading reviews of the the latest Samsung series, but it looks like I may have to reconsider.

And finally in gaming, inside sources are suggesting a possible Sony PSP and PS3 price cut in June. I’ll believe it when I see it in writing on Sony.com. Sony is still rather bullish about the future of the PS3, and from their recent statements, it doesn’t sound like a price cut will be coming anytime soon. But people do want a price cut, as our recent poll shows.

Sony says that the Xbox 360 owns the office, the PS3 owns the living room, and that the Wii owns the closet. I don’t know what owning the office means, but owning the closet means that they think the Wii is not used as much as the PS3, with most gathering dust in the closet. Considering how the Wii continues to outsell the PS3, people must have big empty closets to fill these days. And offices appears to be fun places to be as well, well for those that still have jobs anyway.

That’s all I have for this week. Really, I’m not lying. You can check my pockets if you want to, I have nothing to hide. Well, not much anyway. See you next week.

This entry was posted on Sunday, April 26th, 2009 at 6:25 pm and is filed under Copyright, Electronics, High Definition (Blu-ray/HD DVD/4K), News Roundup, Nintendo Wii, Wii U, Switch, PS3, PS4, Xbox 360, Xbox One. You can follow any responses to this entry through the RSS 2.0 feed. Both comments and pings are currently closed.