Happy Thanksgiving to those in North America, and Black Friday to those that took part. Remember when I used to do a lot of coverage of Black Friday Blu-ray sales here? Back when Blu-ray deals were still rare on the ground, and that paying $12 for a movie was considered a great bargain. Black Friday isn’t as special any more though, and we should have the sales stats in a few weeks to see if others feel the same way as well.

Here’s the news from the week.

Google may be taking a hard line stance against DMCA requests that are not specific enough. In a recent example, Google decided not to take action against home and category pages on potential “piracy” sites, despite these pages often providing list of links to copyrighted titles.

Traditionally, Google prefers each DMCA takedown request to contain one specific copyrighted title, and a URL that corresponds to that title. For category and homepages, these not only feature more than one title, they also often don’t offer direct downloads, and only link to another page that has the download. Google is more than willing to remove a page with a direct download link, but it seems they’re not too sure about category or homepages.

You can sort of see why the likes of the MPAA and RIAA feel frustrated in their dealings with Google, because for them, it would be a lot easier if they could simply get homepages and category pages deleted, as these pages are far more important to the site and are harder for the site admins to change URLs for. But you can also see why Google has drawn a line here, since technically, these pages aren’t “directly” offering any pirated content on them. 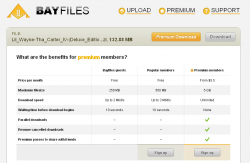 Bayfiles has disappeared, no reasons have been given …

But just because Google doesn’t think that a page is worthy of a DMCA removal, it doesn’t mean that Google won’t punish the page in its own way. This could be through piracy demotions, activated when a site receives too many DMCA removal requests and all pages on the site are demoted. Or it could be something else entirely, and unrelated to piracy at all. This is what appears to have happened to Bayfiles back in June, when most pages on the site were removed from Google’s index. What is more mysterious is that that Bayfiles appears to have disappeared entirely, shortly after its co-founder and former Pirate Bay operator, Fredrik Neij, was arrested in Thailand (unrelated to Bayfiles, but related to the sentenced handed to Neij in the Pirate Bay trial.

No reason has been given for the closure of the site, and for now, the site simply redirects to the main Pirate Bay website (which still links to Bayfiles). Some files on the site (for example: http://bayfiles.net/img/logo.png) still appear to work, but almost everything else has been redirected. Something strange is happening here, and we may hear more about it in the future.

Here’s a new form of piracy that’s only been possible recently – pirated digital watch faces. With the hype over smart-watches, there’s now a demand for digital watch faces from the most famous watch brands from around the world, including Rolex, Tag Heuer, Omega, Armani and Swatch. Users can download these faces to their watch, often for free, and they would instantly have a digital replica.

These luxury watch brands that have had their designs digitized, however, aren’t so happy. And according to TorrentFreak, several have started taking legal action against sites that offer watch face downloads.For now, the sites hosting watch face downloads, many of which are original and very creative works, are complying and have implemented ways to prevent future uploads of “stolen” designs.

While everyone involved seems to be taking appropriate action, I do wonder if this is also another example of a lost opportunity. If these luxury watch companies offered a way to purchase official watch faces (especially at a more than reasonable price), then perhaps there wouldn’t be a need for pirated downloads.

It’s all about anticipating demand, if you can anticipate where pirates will be doing next, then perhaps you can also anticipate the next business opportunity too.

An update on a story from a couple of weeks ago, regarding the MPAA’s WhereToWatch.com website – enterprising hackers have made a browser script that adds torrent links to WhereToWatch movie and TV listings, turning the useful legal content search engine into also a torrent search engine.

Is broadcast TV doomed? That’s what Netflix’s boss thinks, and he thinks that 2030 is when broadcast TV (that is traditional “linear” network and cable TV) will finally come off the air. His prediction isn’t entirely groundless – a recent study found that broadcast TV viewership dropped by more than 50% in the ten years between 2002 and 2012.

While I’m certainly a big fan of “on-demand” TV, there is still something quite reassuring about “linear” TV. Someones makes the decision for you regarding what to watch, and that’s a comfort sometimes. After a hard day’s work, the last thing I want to do is to spending an eternity flicking through Netflix, unable to decide on what to watch (until it’s too late to watch anything and I have to go to bed). And finding something interesting to watch while channel surfing is its own kind of reward.

And there will always be live sports, which so far only really works on a linear fashion, although I think more interactive viewing options (multi-angle, commentary, player cams …) might be welcomed.

So I hope that while on demand and Internet TV will take over as the dominant form of television by 2030, part of me still hopes that linear TV, and other “quaint” things like physical media, will still be around by then.

Meanwhile, have a look at this article to find out just how much Netflix’s subscribers are loving their original programming, and this one which looks at the tricky situation with second screen usage during TV viewing, looking at what works and what doesn’t work when it comes to user interaction, lost eyeballs and advertising.

October’s NPD results did not provide any real surprises. The PS4 was still the top selling console, and the other gaming companies are still choosing not to be specific when it comes to releasing sales data.

What is interesting though is that if you look at the top selling games data, you’ll usually find that for the top selling franchises, the PS4 version will usually outsell the Xbox One version. For October, this was true for ‘NBA 2K15’, ‘The Evil Within’, ‘FIFA 15’, ‘Madden NFL 15’ and ‘Middle-earth: Shadow of Mordor’. The Xbox One was only ahead of the PS4 for ‘Destiny’ (and ‘Skylanders: Trap Team’).

This is a dangerous development for Microsoft, who had gotten used to the Xbox 360 beating the PS3 for multi-platformers. It’s dangerous because it means more and more developers will simply follow the money and make the PS4 their lead development platform for games – this could mean slightly better versions of the games on the PS4 than on the Xbox One, and it’s these “little” things that wins console wars.

That’s the end of this week’s WNR. Hope you enjoyed this issue, see you next week.

This entry was posted on Sunday, November 30th, 2014 at 5:56 pm and is filed under Copyright, Gaming, News Roundup, Nintendo Wii, Wii U, Switch, NPD Analysis, PS3, PS4, Video Technology, Xbox 360, Xbox One. You can follow any responses to this entry through the RSS 2.0 feed. Both comments and pings are currently closed.