Sometimes you get a weird collection of news stories, everything ranging from DRM delusions of grandeur to the latest news about advances in video tech (even though many people are still happily buying DVDs and watching Netflix in SD). Sometimes, like this week, you get a theme: rip, rip hooray.

You’ll get what I mean in a moment.

The ripping scene has been pretty quiet ever since AACS 2.0 showed up via 4K Ultra HD (and some streaming services). This was a tough copy protection scheme that, unlike previous efforts (CSS, AACS 1.0), wasn’t trivial to break. This meant that 4K Ultra HD Blu-ray discs, were for a while, safe from ripping. This seems to no longer be the case. 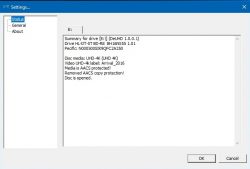 It may not look much, but it may just get the job done if you need to rip Ultra HD Blu-ray discs

Enter DeUHD, the first tool that makes ripping 4K Ultra Blu-ray discs as easy as clicking on a button. Sure, it’s pricey at the moment (an eye watering €199 for a lifetime license), requires specific hardware to work (and it doesn’t always work), but it’s the best we’ve got, and maybe a sign of things to come.

Just goes to show that, no matter how tough the DRM is, it’s only a matter of time before it’s broken. For now, UHD’s sheer size and the lack of proper burning options makes UHD Blu-ray ripping (and downloading) sometime strictly for video tech geeks like myself and gives the format natural protection against being pirated a lot, but being able to down-convert from such a high quality source may mean a slight but noticeable improvement in the quality of rips you’ll start to see (UHD-BDRips?).

Like AACS 2.0, Denuvo, while strictly speaking not a DRM (but really is a DRM), has been a star advertisement for the necessity of DRM (or DRM-like services). But not anymore, maybe.

News that Denuvo protected game ‘Total War: Warhammer 2’ was cracked in matter of hours should give pause all game publishers who had thought that zero day releases were a thing of the past. The time it takes to break Denuvo protected games has been shortening all the time for those that have been following the WNR, from months down to days, and now, down to hours.

So basically it’s the same thing I said two paragraphs ago, so I won’t repeat it again just to make the word count go higher.

It’s taken a while, but the first pirated PS4 game has been shared – you most likely won’t be able to play it though

I guess when things happen they always happen in three’s, and so when the first pirated PS4 game was uploaded online, it wasn’t a total surprise seeing how this week was panning out. But unlike the other two efforts, this was is not for the faint of heart.

In order to play the pirated PS4 games, not only will you need a jailbroken PS4, which means one running a very old firmware version, you’ll also need to know your way around ELF loaders, Netcat and FTP Payload. In other words, it’s not something that will worry Sony at the moment, since it’s purely academic that pirated PS4 game exists – no one will be that desperate to play free PS4 games that they go to all this trouble just to do so.

Still, it’s the first small step towards something bigger perhaps, especially with rumours that a much more recent version of the PS4 firmware may have been compromised.

So this week’s theme based WNR comes to a close here. I doubt next week will be as coherent, and probably not as busy either. We’ll find out then!

This entry was posted on Sunday, October 8th, 2017 at 11:56 am and is filed under Computing, Copyright, Electronics, Gaming, High Definition (Blu-ray/HD DVD/4K), News Roundup, Video Technology. You can follow any responses to this entry through the RSS 2.0 feed. Both comments and pings are currently closed.