Another relatively quiet week, but we have a couple of quite interesting stories to go through, so let’s not waste any time on this very cold Sunday (brrr!). 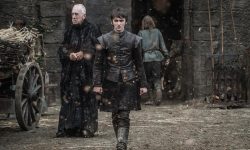 Oh Bran, what have you done? Did you warg into an HBO intern’s mind to leak the new episode?

Starting with copyright news as always, HBO’s anti-piracy efforts took a step backwards this week with their Nordic branch decided that the world couldn’t wait another 24 hours (and a bit) to see the next episode of Game of Thrones. Someone at HBO Nordic decided to try their hand at pre-release leaking, and the new episode was put up online a day earlier than expected. To make matters worse, HBO Nordic has a 30 day trial for their online video services, meaning that anyone from around the world with a VPN were able to enjoy the episode titled “The Door”, and do it for many hours before HBO wised up, and more than a day before the official US premier.

It appears that despite all of HBO’s renewed anti-piracy efforts this season, this gaffe opened the door and held it open for pirates to take advantage – they promptly uploaded a (initially a poor quality version, and then a 1080p version) copy to all the usual piracy places, for all to enjoy. I’m sure HBO will be much more careful this week, when the sixth episode of the sixth season, “Blood of My Blood”, will be broadcast.

And yes, that was deliberate (don’t want to say too much than that – no spoilers from me, thank-you very much).

US Netflix subscribers will have some great movies to look forward to, when Netflix’s exclusive deal with Disney starts in September. Under the deal, Netflix will have exclusive pay-TV rights, in the US, to all of Disney’s films, starting from 2016 onwards (so The Force Awakens just miss out … boo!). This includes all Marvel, Pixar and Lucasfilm films, as well as films released under Disney’s banner, all available shortly on Netflix after their initial Blu-ray/DVD release (the same release time-frame that pay TV operators used to enjoy). The exclusivity part ensures Amazon, Hulu and cable operators won’t get these films during the pay TV release window, which is a much needed boost to Netflix’s flagging (non original) movie line-up.

The Xbox One is getting not one but two upgraded models, and one of which will directly take on the PS4 Neo. Dubbed the ‘Scorpio’, the super powerful Xbox One is rumored to be targeting 6 teraflops of peak power, which compares rather favourably with the Neo’s 4.14 teraflop target (and much better than the Xbox One’s current 1.32 teraflops). Both companies appears to have embraced the iterative upgrade model (think iPhone), and will be releasing upgraded consoles at shorter intervals. I’m not sure I like this to be honest, and I’m not sure if it will even work. It’s one thing to upgrade a phone every year, but a game consoles that has severely reduced resale value (and not as easily passed down to family members)? I just don’t know …

But if it does work, then the PS4 and Xbox One could be the last major console release as we know it. The Neo and Scorpio are basically just new consoles with a healthy dose of backwards compatibility – both Sony and Microsoft can actually keep this up indefinitely if they wanted to. Microsoft Xbox boss Phil Spencer’s remarks about turning to the PC’s model for upgrades, is now starting to make sense. He wasn’t talking about opening up the Xbox One and plugging in a new GPU, but rather on the architecture and design point of view of incremental updates, and in regards to backwards compatibility. So instead of a major new architecture that destroys compatibility, the upgrades will be more minor, but more numerous.

Let’s wait and see how gamers react to all of these changes, especially when it comes to forking over their hard earned cash.

That’s all we have time for this week. Actually, we have plenty of time, but we’ve run out of news, so that’s that. See you next week.

This entry was posted on Sunday, May 29th, 2016 at 4:45 pm and is filed under Copyright, Electronics, Gaming, High Definition (Blu-ray/HD DVD/4K), News Roundup, PS3, PS4, Video Technology, Xbox 360, Xbox One. You can follow any responses to this entry through the RSS 2.0 feed. Both comments and pings are currently closed.