Another short one this week, as it has been a pretty boring week in terms of news. I guess this is a kind of birthday present to me, to give me a little breather the week before. So thanks to the MPAA, pirates, the Blu-ray people and game console companies for not making any big splashes – if you can keep it up for another week, that would be much appreciated!

Here’s the news that we did get …. 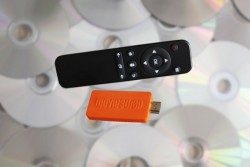 A new Kickstarter aims to take DVD lending and swapping to the next level, but unfortunately, it may be a level that’s swarming with MPAA lawyers and an end boss that’s impossible to defeat. MovieSwap wants you to send in your old DVDs, and for every DVD you send in, you’re able to swap it for another DVD send in by another user. Except the physical DVD stays with MovieSwap, and its the ripped, digital version they you’ll be swapping around.

DVDs can only be “lent out” one at a time, just like with a real swap, but being digital, the movie can be watched on a variety of devices.

If you’ve read this blog for some time, you’ll already know why this innovative idea will simply never work. Not because there are technical problem with it (there might be, as it seems there might be an imbalance between the number of available copies of DVDs people want and the DVDs they actually send in), but there definitely seems to be some legal clouds over the idea behind the service. Clouds, or perhaps a category 5 cyclone.

The MPAA won’t like the ripping part, that’s a given. Remember Kaleidescape and when they tried to rip DVDs for use on a local media server (not shared with anyone but the DVD’s owner), and how they got slapped legally for it? And while this replicates the idea of personal lending in the digital space, this kind of replication has never been viewed upon favourably, not by the rightsholders nor by the legal system (see Aereo and their replication of how DVRs work). Then there’s the small problem of the MPAA not getting even a small cut of the profits.

The problem for me is that MovieSwap doesn’t just replicate how DVD swapping works – it improves it by way too much. In real life, I would never be able to swap movies with a total stranger from anywhere in the world (and it might be weeks before I get my DVD back in real life). It’s DVD lending on steroids, and the net effect will be that people will spend less money to watch more movies, with money they would have otherwise given the the MPAA studios going into MovieSwap’s pockets instead via the monthly subscription fee.

It’s easy to see why the MPAA won’t like this, not one bit.

This is not what Phil Spencer meant by upgradeable Xbox Ones

A clarification from Phil Spencer about “upgradeable” Xbox Ones – they won’t be. When Spencer originally talked about upgrading the Xbox One hardware, some assumed it meant making the Xbox One more like PCs, with parts you can buy the upgrade the innards. Or at the very least, making the Xbox One more modular so you can plug in add-on hardware to make it more powerful. I for one always thought he meant just a new SKU with a beefier version of the Xbox One, that was still compatible with all existing Xbox One games, but had better graphics (it’s similar to the idea Sony has for a Super PS4).

Whatever the case is, you won’t be needing a “screwdriver set”, according to Spencer.

As it’s a pretty light news week, I might just update you again on the state of video game sales in the US for Februaryu, in which the PS4 outsold the Xbox One again, just like it did in January, December, November … or until whatever it was the last time I remembered to write about NPD results here (hard to find anything to write about when it’s the same every month). As per usual, Microsoft talked up the fact that sales are way up compared to a year ago, which may mean the gap between the two consoles is closing.

So that’s that then. See you next week, when I’ll be a year older but most definitely not wiser!

This entry was posted on Sunday, March 13th, 2016 at 10:57 am and is filed under Computing, Copyright, News Roundup, PS3, PS4, Xbox 360, Xbox One. You can follow any responses to this entry through the RSS 2.0 feed. Both comments and pings are currently closed.