Welcome to another edition of the WNR. It’s been an annoying week so far for me. First with my ADSL modem dying on me, which took a while, and a lot of crawling on the floor and pulling out cables, to diagnose. This backed me up in terms of work, so I’ve been playing catch up ever since, during a week which was particularly busy as well. And then there was the Arsenal match last night … urgh.

Still not a great news week, but here’s some stuff that may be interesting.

Game of Thrones piracy is about to get really ugly here in Australia, thanks to a new HBO deal with our (one and only) cable provider, which will now prohibit iTunes and other digital providers from making available new episodes of season 4 until the season is over. 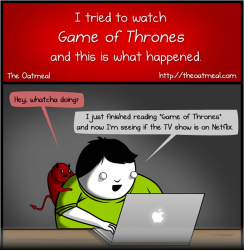 This Oatmeal comic is appropriate again, thanks to more HBO led efforts to prevent people from watching their shows – click through to read the full comic

Not only will it cost cable subscribers at least $USD 67 per month to access the channel that includes new episodes of GoT, the lack of access to HBO Go means non set-top-box viewers will have to rely on the cable provider’s mobile app to watch these new episodes, made worse by an exclusive deal between the cable provider and Samsung which prevents the app from running on non Samsung Android devices.

It’s almost as if they don’t want us to watch the show.

With Australia already the top country when it comes to GoT piracy (and not just a percentage of the population thing, but raw numbers, which sees Australians top US and UK downloaders in the piracy charts), this is the exact kind of bone-headed move that will ensure Australia retain the piracy thrones for season 4 too.

Should domain registrars be made liable for the content being stored on registered domains? A court in Germany seems to think so, as the ever expanding liability circle is once again expanded to help the entertainment industry find better (and by better, I mean easier) targets to legally threaten.

According to the ‘about’ page of the domain registrar that I regularly use, Namecheap, they have over 2 million registered domains from 500,000 clients. And if the Germany ruling were applied to Namecheap, this would be a hell of a lot of liability for a company that has no legal right or even technical ability to access and monitor the contents stored on these 2 million domains.

It’s easy for the record or movie industry to go after registrars and web hosts, because they’re usually visible companies that can be easily sued and harassed, legally. And this is why considerable effort has been made to expand the list of just who is liable for content published on the website, from the actual owner/publisher of the website, to the web host, to search engines, and now all the way to the registrar. It’s only a matter of time before even browser makers are made liable, as you could easily argue they have the ability to block access to obviously illegal websites, and so they should. Heck, why not sue modem/router makers too, for that’s where the illegal data flows through to your computer. Although not my old modem, obviously, since it’s now broke.

It’s North versus South. Korea that is. Proving that the Wii is still being played at least somewhere in the world, official North Korea photos shows that the country has finally entered the video game age (even though they’re still a generation behind). And they even have a Wii Balance Board!

Not to be outdone, South Korea has managed to one up their northern neighbors by utilizing Kinect to protect the DMZ between north and south. A Kinect based system is being used to help their infrared detection grid tell the difference between animals and humans in the DMZ, which is now one of the world’s best wildlife sanctuaries due to the lack of a human presence in the area. South Korea is already thinking about an upgrade to the Xbox One’s Kinect 2.0 for even more accurate detection. Will the North respond by buying a PS4? Only time will tell … 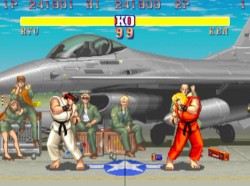 As a side and totally unrelated note, I spent a lot of time this week reading this piece on the history of Street Fighter II, time that I probably should have spent working or at the very least, sleeping. As someone who spent more than $100 (a lot more in today’s money) back when buying a copy of Super Street Fighter II for my SNES, as well as playing not only the arcade versions, but also bootleg versions on bootleg NES/Famicom systems, the article brought back a lot of good memories. If there’s one game that I would still like to play on SNES, it would be this one. If I’m allowed two, it would be a hard choice between Super Mario World, Super Mario Kart and Contra III. The first time I figured out how to beat Vega in single player mode (figuring it out all by myself by the way, since the Internet hadn’t been invented yet), was a true moment of joy in my fairly joyless nerdy teenage years.

And as a followup to last week’s story about the Blu-ray-less $399 Xbox One, Microsoft has issued a response, of sorts, to the rumor. Aaron Greenberg, Chief of Staff for Devices and Studios Group at Microsoft tweeted the response “No, you cannot believe everything you read on the internet,” when asked directly on the rumors of the cheaper Xbox One. So a less than concrete denial, but I would still be very skeptical at Microsoft moving forwards with this plan.

This entry was posted on Sunday, February 9th, 2014 at 4:23 pm and is filed under Copyright, Gaming, News Roundup, Nintendo Wii, Wii U, Switch, Xbox 360, Xbox One. You can follow any responses to this entry through the RSS 2.0 feed. Both comments and pings are currently closed.