The March 2012 NPD figures are out for US video game sales, and the industry is looking for any signs that indicate things may be on the up again, following a pretty poor January and February period. It is also the first time in 2012 that included the release of an A-list title, Mass Effect 3.

As NPD no longer releases full hardware sales figures, this feature is reliant on the game companies, namely Microsoft, Nintendo and Sony, to release their set of figures and based on “statement math” (that is, arithmetically calculate missing figures based on statements made). For March 2012, these are the statements made by the gaming companies:

A little bit of “statement maths” tells us that a little more than 337,000 PS3s were sold.

And so the figures for US sales in March 2012 are below, ranked in order of number of sales (March 2011 figures also shown when available, including percentage change): 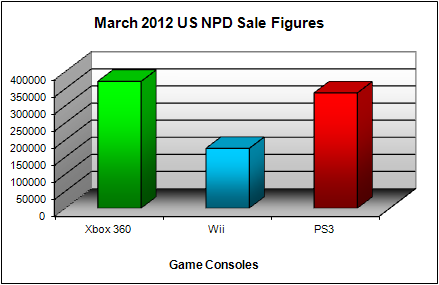 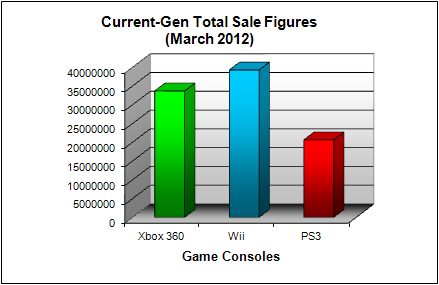 NPD Game Console Total US Sales Figures (as of March 2012)

March is traditionally a slightly slower month than February, so while the year-on-year downward trend may continue, there is the release of an A-list title in Mass Effect 3. The hardware sales order should remain the same.

The release of Mass Effect 3 really didn’t help hardware numbers, and March was, as expected, down compared to February, with the hardware order exactly the same as last month as well.

For the Xbox 360, this marks the 15 months in a row that the console has beaten the Wii and the PS3 as the best selling console for the month – a terrific result, and surprising considering what had happened just before the run began (the Wii had a huge lead for the first couple of years, and the PS3 Slim/price cut seems to have rejuvenated the system – then the Xbox 360 released its own “Slim” version, followed shortly by Kinect, and it has never looked back). Microsoft PR was also keen to point out that “Total retail spend on the Xbox 360 platform in March (hardware, software and accessories) reached $430 million, the most for any console in the U.S. and more than the spend on PS3 and Wii combined” – for all the talk of console numbers and consecutive sales leads, in the end, it’s the income that’s important, and the 360 is doing pretty well. The stellar performance of Mass Effect 3 on the platform was also a talking point, but we’ll cover that later on when we discuss game sales.

For the PS3, March can be seen as a positive one, with the PS3 only selling 34,000 fewer units than the 360 – the gap between the two consoles has narrowed in recent month. The exiting of Wii from the competitive home based console race, making it really a two horsed race, has probably helped the PS3 absorb a few more buyers, and it was the console that appears to have done the best when you do a year-on-year comparison for March. Still, it’s looking unlikely that the PS3 would catch the Xbox 360 in this generation (in the US of course, globally, that’s a different matter), even with the price cut that analysts have been calling for (which Microsoft can easily match). But while there is still some life, not much, but some in Kinect (with Star Wars Kinect just being released, plus Kinect support for Mass Effect 3 and Skyrim), the PlayStation Move appears to be dead in the water for now.

As mentioned above, the Wii is now selling around only half as many units as the PS3, not to mention the Xbox 360, and the final few month of the console as Nintendo’s lead home based platform could be a painful few. Like most Wii owners, Nintendo are now probably very keen to move on to something better. It’s probably a bit too early to provide an eulogy for the platform, as there’s still a good chance it may still end up staying the best selling console of this generation (in the US) if the Xbox 360 can’t make up the 6 million difference between now and when it too is retired.

For games, March was all about Mass Effect 3, and having sold 1.3 million units, it was the clear number one – the next best was Resident Evil: Operation Raccoon City with less than half as many copies sold. ME3 also sold more than twice as many copies as ME2 when it first came out. For Microsoft, a little extra celebration is called for, as ME3 sold 4 times as many copies on the Xbox 360 than on the PS3. The sheer dominance of the Xbox 360 version can most likely be attributed to the first game in the series not being available on the PS3, and the nature of the series itself which allows gamers to continue on using save files from the previous game. Actually, if you look at the table below, you’ll see lots of new releases, but sales still managed to decline 26% compared to a year ago. Here’s the full software sales chart for March (new releases shown in bold):

So prediction time. April is traditionally a very slow month, what with the Easter break and everything, so if the industry is looking forward to better results, it will be disappointed. The sales order for the consoles should remain the same. The list of new games being released looks quite lacking indeed, with Kinect Star Wars and The Witcher 2: Assassin of Kings looking like the picks of the bunch on the 360, and hardly any new games of note on the PS3 judging by the current sales charts.

This entry was posted on Monday, April 16th, 2012 at 11:42 am and is filed under Nintendo Wii, Wii U, Switch, NPD Analysis, PS3, PS4, Xbox 360, Xbox One. You can follow any responses to this entry through the RSS 2.0 feed. Both comments and pings are currently closed.