The monthly NPD video game sales analysis makes a return this month, after last month’s absence. Today, we look at the US video game sales stats for February 2012, based on figures compiled and “released” by NPD. With January’s rather poor showing, all eyes were on the February results, to see if January was just an aberration, or the start of a new downwards trend. Last February was a great month for game sales, with hardware unit sales up for all consoles compared to a year before – but given the bad January results, nobody is expecting the same this time round.

As NPD no longer releases full hardware sales figures, this feature is reliant on the game companies, namely Microsoft, Nintendo and Sony, to release their set of figures and based on “statement math” (that is, arithmetically calculate missing figures based on statements made). For February 2012, these are the statements made by the gaming companies:

A little bit of “statement maths” tells us that 360,000 PS3s were sold, a good enough result for Sony that I thought they might have wanted to publicize a bit more.

And so the figures for US sales in February 2012 are below, ranked in order of number of sales (February 2011 figures also shown, including percentage change): 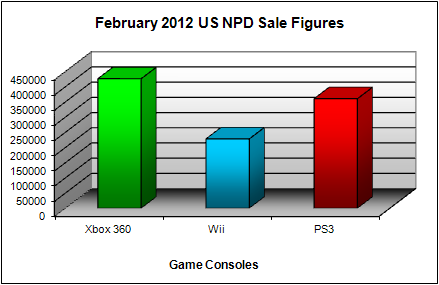 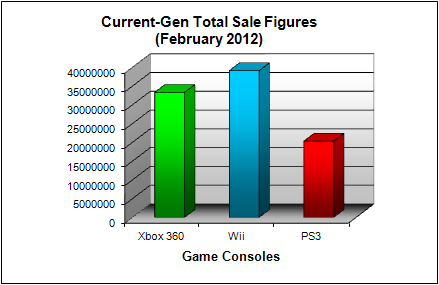 NPD Game Console Total US Sales Figures (as of February 2012)

There was no prediction last month, as there wasn’t a full analysis.

While sales of all the consoles were up compared to the dismal January, all consoles continue to sell much less than the same time last year, but for different reasons.

For the Xbox 360, still relatively comfortable as the best selling console of the month, the decline has a lot to do with the dissipating hype over Kinect, and the novelty of the new Xbox 360 form factor, which was still in play last year. With Kinect Star Wars not coming until April (and even then, it doesn’t look as if it will make a huge impact, sales wise), the Kinect unlikely to lift Xbox 360 sales beyond helping it stay ahead of the PS3.

For Sony, the PS3 had the smallest year-on-year decline of the home based consoles, and comprehensively beat the Wii by just over 130,000 units, both facts that I had assumed Sony would have wanted to promote, but they remained oddly silent on PS3 figures, only commenting on the PS Vita, which managed to sell 225,000 units. With nothing really hyping up PS3 sales this time last year, the 10% or so decline might be the one that best show the industry’s overall decline. Whether this is due to market saturation, the end of a generation cycle, economic conditions, it’s all hard to say.

But it’s definitely the end of a cycle for Nintendo’s Wii, and the Wii U can’t come soon en0ugh for the company. A near 50% decline year-on-year is a bad result no matter how you look at it, and in terms of hardware, and innovation, the Wii now looks like a very dated piece of tech. With no multimedia and very little online functions to prop up the console’s usefulness, as is the case with the Xbox 360 and PS3, the Wii was always more prone to the “gathering dust in the closet” effect.

Software wise, it was another slow month as the lack of any A-list releases probably also hurt hardware sales. Final Fantasy XIII-2 was the top selling new release, despite technically being released in January (but counted in the February reporting period). Modern Warfare 3 remained the top seller for the month. The only platform exclusive to make the top 10 below was Sony’s update of Twisted Metal, coming in at 9th. Here’s the full software sales chart for February (new releases for February 2012 in bold):

Time to make a prediction. March is traditionally a slightly slower month than February, so while the year-on-year downward trend may continue, there is the release of an A-list title in Mass Effect 3. The hardware sales order should remain the same.

This entry was posted on Tuesday, March 13th, 2012 at 10:48 am and is filed under Nintendo Wii, Wii U, Switch, NPD Analysis, PS3, PS4, Xbox 360, Xbox One. You can follow any responses to this entry through the RSS 2.0 feed. Both comments and pings are currently closed.