Welcome to the July 2011 edition of the NPD US video game sales analysis. For July, only Microsoft provided actual figures for hardware sales, stating 277,000 units of the Xbox 360 was sold, and that their console accounted for 45% of the home based console market share. Later on, Wedbush Securities analyst Michael Pachter revealed that Wii sales had dropped 25% compared to the same month last year. With these three facts, we can then deduce the PS3 sales figures, for which Sony has yet again remained silent on. For those that are new to this, this analysis looks at US video games sales figures compiled by NPD, unreleased by NPD due to pressure from the gaming companies, but then leaked by various sources, including gaming companies, if/when it suits them.

The figures for US sales in July 2011 are below, ranked in order of number of sales (July 2010 figures also shown, including percentage change): 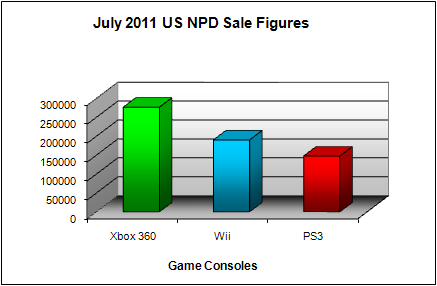 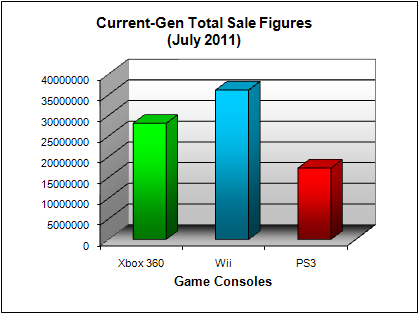 NPD Game Console Total US Sales Figures (as of July 2011)

I think the Xbox 360 will experience its first year-on-year decline in ages, but still comfortably stay at the top of the home based console hardware sales charts, leaving the Wii and PS3 to fight it out for second and third place, and I think the Wii might be better positioned to win for some reason. It’s NCAA Football season again, so it will be the top seller, but otherwise, not a huge month for games again.

An almost perfect prediction, a rare event indeed. The Xbox 360 did experience its first major year-on-year decline, and it actually was the biggest fall out of the three home based consoles, but despite this, it still managed to comfortably be the best selling home console for July 2011, which is on record as the worst performing month since October 2006. And as I had predicted, the Wii won the fight against the PS3 for second place, but in full honestly, both of these consoles performed horribly, adding to the misery that is July. And new hit games were far a few between in July, and so game sales slumped as well.

As expected, the Xbox 360 saw its first major year-on-year decline since 2009 (I think). It is expected because this time last year, the new Xbox 360 “Slim” had just been released, and the sales surge from this event actually managed to give the console a 119% lift in sales compared to July 2009. So obviously, with no new consoles in July 2011, year-on-year sales dropped as a result, and I suspect this will continue for a few more month. The Xbox 360 was still the best selling home based console, with a massive 45% of the home based console market share for July – that it sold almost twice as many units as the PS3 is testament to its growing dominance.

Despite a price drop, the Wii languished in a distant second place, dropping 25% in sales from the same month last year (which was even compared to July 2009). There’s not much positive things one can say about the Wii, and coupled with alarmingly decreasing DS/3DS sales (prompting Nintendo to drop prices on the 3Ds only a couple of month after release), Nintendo will hope there are no delays to the release plans of the Wii U.

So overall a pretty bad month for video games, but with the economy the way it is and with most of the consoles many years into its release cycle, it’s probably not unexpected. For games, it’s been a quiet month as well, with NCAA Football dominating as it usually does at this time of the year. Just Dance 2 for the Wii continues to show off its staying power in the top 10, this time coming 5th. Here’s the full software sales chart for July:

Prediction time. With the PS3 price drop coming in just a few days ago, this is just the sort of major event that makes predictions extremely difficult. There’s no doubt in my mind that the PS3 won’t come last again (Wii has the third spot amongst the home based consoles locked up), but the main question is can the PS3 outsell the Xbox 360? The price cut being only $50, and with no new console coming with the price cut like two years ago, maybe it will just come short, but it will be a close run race that’s for sure. For games, again, there’s nothing really of note. Usually at this time of the year, Madden NFL dominates, but with the Madden NFL 12 coming at the end of August, it may not have enough time to make such a major impact this time, although it will probably still be the best seller based on pre-orders alone. No More Heroes: Heroes’ Paradise for the PS3 and Deus Ex: Human Revolution seems to be the only two other notable releases in August.

This entry was posted on Wednesday, August 17th, 2011 at 6:38 pm and is filed under Nintendo Wii, Wii U, Switch, NPD Analysis, PS3, PS4, Xbox 360, Xbox One. You can follow any responses to this entry through the RSS 2.0 feed. Both comments and pings are currently closed.