Going by my site statistics, chances are that where you are, it’s probably nice and warm. It’s not so nice and warm here where I’m typing though. Early spring teased us with a couple of days of warm weather, but the bone chilling cold is now back for an encore. So. Bloody. Cold.

We do have a bit of news this week, not a lot, but enough. So let’s get started. 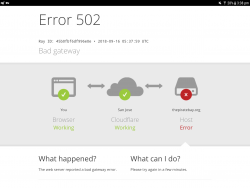 The Pirate Bay is down for a lot of users

There’s been increasing legal pressure on sites like The Pirate Bay, but while many sites have fallen, The Pirate Bay remains. I was going to say “remains strong”, but that’s probably not true. The Pirate Bay is currently in the middle of yet another extended downtime, and while access has returned for some, it remains problematic for others. Others including myself, as while writing the story and testing to see if I could access the site, I had to first deal with our court mandated piracy filter (easily bypassed with my VPN of choice), before getting the dreaded “Error 502 – Bad Gateway”, otherwise known as the can’t connect to the site, page.

There are reports that the site is working fine for others though, so it feels like there’s a bad pathway somewhere, or a few bad servers among good ones.

It’s not the only torrent site that has been experiencing technical problems of late. Demonoid, another site from the golden age of piracy, is still accessible for the most part (and not blocked here in Australia … yet), but certain parts of the site are not working. These include the all important torrent details page, although you can still download torrents from the search results/index pages.

So not a great time for pirates looking for the latest downloads, but they already know that there are powerful forces working against pirate site these days, and if TPB and Demonoid’s problems are only technical ones and not legal ones, then that’s probably the “best” kind of downtime they can hope for.

Amazon Prime not as popular as Netflix, but OTT as a whole doing extremely well

You don’t need to have being paying too much attention to realise that the future of video lies in OTT services. OTT stands for Over The Top, and it’s just another way of saying video delivery via the Internet (as opposed to cable/satellite and other traditional broadcast), and so things like iTunes and Netflix are all counted.

The latest research suggests that OTT is going to be the dominant video delivery method not just in the US but also in Western Europe. There are some interesting predictions in the last report by research firm Digital TV Research, like how dominant Netflix is (over twice as popular as Amazon Prime Video), and how dominant SVOD will be in 2023 (54% of all OTT revenue).

Showing that there’s still probably room to grow for the like of Netflix and Amazon Prime, currently 30% of all revenue comes from the UK alone. While Digital TV Research believes that this will still be true in 2023, with Netflix and others keen on adding more non English original content, the other markets might have more potential for growth than what Digital TV Research gives them credit for.

That’s all I have for you this week. Hoping for more next week, as always. Until then, have a great one!

This entry was posted on Sunday, September 16th, 2018 at 6:44 pm and is filed under Copyright, High Definition (Blu-ray/HD DVD/4K), News Roundup, Video Technology. You can follow any responses to this entry through the RSS 2.0 feed. Both comments and pings are currently closed.