The war on piracy has had its share of collateral damage, and I guess if you think about it, torrent news website TorrentFreak getting blocked by piracy filters isn’t the most surprising news story. I mean when copyright holders are having their own websites blocked by mistake, getting TorrentFreak, one of the most well known sites that cover torrent and piracy related news blocked by “mistake”, isn’t beyond the realms of possibility.

Now, I’m not saying that TorrentFreak was gagged in an act of censorship abuse, but when a site covers so much torrent and piracy information, much like what we do here, getting blocked because of some not very smart auto-blocking algorithm, or worse, some human reviewers that fails to understand what the site is about, is fully expected. But that’s the nature of filters – they’re more right than wrong, but they’re not 100% right all the time.

I guess it would be asking too much for these blocking services to provide an easy way to appeal blocking decisions. Some of them do, but often the process is so lacking in transparency, that you don’t really know you’ll getting a proper review, or you’re just getting an auto-reply. Even the likes of Google is guilty of this, because it seems they make it deliberately vague as to whether humans, or an algorithm, make decisions on what’s allowed and what’s not (I suspect it’s most likely an algorithm though, as the other way would open them up to all kinds of lawsuits).

So all of this makes you want to say f*ck you to filters, site blocks and censorship. But that will probably just get you filtered. 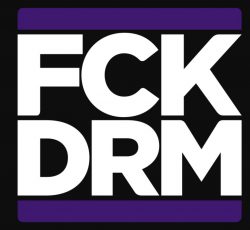 GOG has been saying f*ck you to DRM for a while now, but they’ve never had a website about it. They do now. GOG’s FCK DRM initiative is about educating people about why DRM-free is important and how they can get DRM-free content. If you’ve been reading this website, you already know the reasons. DRM-free means you’re not beholden to some publisher who may decide to one day to no longer support the DRM’s authentication servers, or the software used to decode the DRM’d content.

DRM also means you lose your rights as a consumer to back up content. You may also lose interoperability, meaning stuff you’ve purchased on one device may not work on another device.

None of this would be as big a problem except for the fact that DRM doesn’t even work, and so we’re essentially having to put up with all of these restrictions for no other reason than to give rights-holders a false sense of security.

In other words, FCK DRM!

And on that happy note, we come to the end of another WNR. More of the same next week, probably. See you next week.

This entry was posted on Sunday, September 2nd, 2018 at 9:35 pm and is filed under Copyright, Gaming, News Roundup. You can follow any responses to this entry through the RSS 2.0 feed. Both comments and pings are currently closed.