I’m not getting into the April Fools game this year. If you follow this roundup, or just read news in general, you’ll already know how absurd real news stories can get these days, so anything I can come up with for April Fools will be lame by comparison. So if I you read a new story about the MPAA sending a representative to become a board member of the XBMC Foundation, the foundation that operates the Kodi project, or if the RIAA has decided to submit Spotify to the USTR to add to their global piracy blacklist, or if Australian media boss Graham Burke says Google’s perceived lack of action on piracy means kids are being lured into bad Internet neighbourhoods full of prostitutes and drug dealers, then you probably have no idea whether they’re real or if they’re an April Fools news story.

That last one was actually real news, BTW.

Here’s the real news (I promise) … 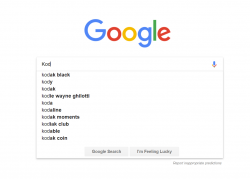 ‘Kodi’ has been filtered by Google

Google has decided the term Kodi might as well be a synonym for piracy, and has banned the word from its Autocomplete feature. So instead, if you type “kod” into Google, you’ll get the suggestions like “kodak black” or “kodiak bear”, and nothing related to the media software.

The fact that the Kodi software is just a media interface, not too dissimilar to Microsoft’s Windows Media Center software that came with Windows versions from XP to 8.1, makes the banning quite strange. Especially when you consider that other legal software terms with even stronger links to piracy, such as “uTorrent” and even “Popcorn Time”, are perfectly fine by Google standards.

I do expect Google to reverse their decision in an embarrassing back down at some stage, and they will do what they always do, blame the algorithm (and so to theoretically remove the human element from the equation as a means to project themselves from lawsuits … never mind that algorithms are written, tested and monitored by human beings, and I believe that’s where the ultimate responsibility lies – anyway, getting off topic).

Does this all have an effect on Kodi? According to Google Trends, search traffic for the term “Kodi” dropped by more than 21% in the last week, so …

People are pirating Spotify. I really didn’t know that this was a thing until this week.

Another media software in the spotlight recently is Spotify, mainly due to its impending IPO on the NYSE. As part of that process, Spotify has had to audit themselves and present any irregularities. One irregularity that Spotify has identified is that approximately two millions of its users are using hacked versions of the Spotify app, which allows free accounts to access premium features, such as no ads. What this means is that there are two million users that aren’t generating profit for Spotify, and unfortunately, these users has been counted as normal users and included in Spotify’s previously published key performance indicators.

I personally believe it isn’t the ads that people are trying to bypass by using the hacked version. The free version of Spotify’s most annoying limitation, at least when it comes to the mobile app, is the inability to select tracks to play, and only being able to play a playlist on shuffle. Worst yet, and this is one of those badly documented limitations, the shuffle playlist play will only work for a number of tracks before Spotify will just play you random (but sometimes related) tracks not in your playlist. This is especially true if your playlist consists of tracks from a couple of different albums – this is Spotify’s way to prevent free account holders to listen to a single album on a loop, even if it’s on random shuffle. If it was just the ads, I think most people would just live with it.

And on that note, we come to the end of another WNR. See you next week!

This entry was posted on Sunday, April 1st, 2018 at 6:30 pm and is filed under Copyright, News Roundup, Video Technology. You can follow any responses to this entry through the RSS 2.0 feed. Both comments and pings are currently closed.