Pirates and developers working together – weird but true!

It’s often said that piracy can help game sales, via the discovery and promotional effects of piracy. But to see game developers actively work together, side by side, with pirates to promote a game, is another thing. This other thing happened recently when the game developers behind the game ‘Serious Sam’s Bogus Detour’ decided to accept help from an unlikely place – from game cracker Voksi!

If that name sounds familiar it’s because just a few weeks ago, I mentioned Voksi right here, when he released a YouTube tutorial on how to crack Denuvo of all things. Voksi is also a big fan of the ‘Serious Sam’ series (and most game pirates are also game fans, it has to be said), and when he saw that ‘Bogus Detour’ was struggling, despite getting great reviews on Steam, he decided to reach out to the game’s developers.

Apart from not targeting the game of cracking, Voksi also suggested that the developers release an “official” pirated version of the game that includes a message at the bottom of the screen to ask gamers to buy the game if they like it. Voksi also put up his own money to provide a giveaway related to the release of the “pirated version”. What is perhaps most surprising was that the developers, ‘Crackershell’ (no pun intended), took Voksi’s suggestion and formed one of the rarest relationships in the game industry.

If there ever was proof that piracy can be a promotional tool, this is it. It’s also worth noting that this kind of story leads to people like me writing news articles, which can also help to promote the game further. At the very least, something like this won’t have done the developers any harm, since the game was struggling sales wise in any case. Let’s hope more fruitful partnership of this sort will exist in the future. 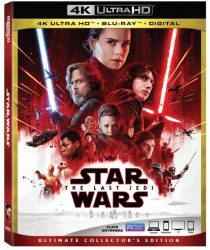 I know that ‘The Last Jedi’ was a divisive film among Star Wars fans, but I personally loved it because it at least tried to tell a different and unexpected story. What wasn’t divisive was the soundtrack, which has been critically acclaimed and was nominated for an Oscar (which, unfortunately, it did not win). Now, for those in the US at least, you can buy the digital “music only” version of the film. It’s what is commonly referred to as an “isolated soundtrack”, where you can hear the soundtrack matched to picture in all its glory. Isolated soundtracks used to be quite common once upon a time, but they’re quite rare now, so it’s good to see something like this, even if it is only via a digital purchase and not included with the Blu-ray edition.

It’a also worth noting that ‘The Last Jedi’ will be the first Star Wars film to be released in 4K format. It will be interesting to see just how well it does on 4K as a benchmark of how the format is doing, since Star Wars film generally sell fantastically on disc and it might even be the best selling disc for 2018, just like the last movie.

I know it’s short, but it’s also sweet, no? Well, it’s all I could do this week, see you again soon!

This entry was posted on Sunday, March 25th, 2018 at 2:52 pm and is filed under Copyright, Gaming, High Definition (Blu-ray/HD DVD/4K), Movies, News Roundup. You can follow any responses to this entry through the RSS 2.0 feed. Both comments and pings are currently closed.