Welcome to another edition of the Weekly News Roundup. A very short roundup this week because news has been very meh-ish this past week. Could be just me not paying attention though, so don’t blame me if SOPA II was passed and it’s not mentioned in the passages below. Well okay, blame me if you like 🙂

Following some big profile mistakes, and embarrassing bird song related gaffes, Google has decided to implement a few changes for YouTube’s sometimes controversial Content ID program. For those that don’t know, Content ID is an algorithm that scans uploaded YouTube videos for infringing content. And as with any automated system, false positives are always going to happen.

Content ID has been improved by YouTube, adding in a new appeals process, as well as smarter detection of “unintended claims”

Previously, a video flagged as infringing by Content ID will be blocked automatically, with the uploader free to dispute the claim. But if the dispute is rejected, the video stays blocked. With so many claims and so many disputes, content holders sometimes get overwhelmed to the point where the intern they’ve “hired” to do the job of processing these disputes will simply dismiss them all. This left uploaders who are certain the claim was false without further recourse (as was the case in the bird song case).

Now, uploaders will get the option to further appeal the dismissal of their dispute claim, and firmly smash the ball back into the rights holder’s court. Rights holders will now have to either release the original claim, or file a formal DMCA notice to keep the block in place. A surprisingly sensible copyright related change from Google given recent announcements, but one that some of the lazier rights holders might complain about.

The other changes involve more back-end stuff that most users may not notice. A new category of “matched” videos will be added, for those that appears to contain infringing content, but are also likely to be, in Googlespeak, “unintentional claims”. These “unintentional claims” will be put in a queue for the rights holder to manually review. Google’s original blog post regarding these changes simply mentioned “manual review”, and some had thought that Google would manually review these less than certain matches, which would suggest a rather big change in strategy for Google. But Google later clarified that was not the case, and common sense suggests that something like this would never be the case (because manual review equals human input equals liability).

In any case, I hope these changes will hopefully restore some semblance of balance back to YouTube’s over-sensitive anti-piracy system. More needs to be done regarding fair use content though, maybe an option uploaders can set to indicate the possible presence of fair use.

But Google’s well noted “one hand does not know what the other hand is doing” approach that has so far allowed the company to escape censure for being a monopoly, also gives us the next story. So while YouTube is at least trying to bring balance back to anti-piracy, Google’s money maker, AdSense, has been accused of being overly paranoid in its anti-piracy approach.

Despite making his book available via a Copyleft license, Google deemed The Pirate Bay and Demonoid links to the book on the author’s own website as copyright infringing

Unlike many other advertising programs for website owners, AdSense has a relatively loose set of entry requirements (many other ad websites require manual review of sites before they’re allowed in). Webmasters are required to ensure their websites do not violate Google’s policies, including not hosting ads on websites that may carry or link to infringing content. Fair enough. But when all you’ve done is to link to a torrent to a copy of your own, freely available book that just happened to be posted on The Pirate Bay and Demonoid, then perhaps getting your account banned may just seem a tiny bit over the top. But that’s exactly what happened.

What happened to Iraq veteran and Python (the programming language, not the reptile) enthusiast Cody Jackson isn’t an isolated incident though. But unlike Jackson’s story, which forced Google to rethink its ban after his story received much publicity, others are unlikely to have the same great eventual outcome. The worst part of Jackson’s story is that he actually did try and appeal his account suspension, but despite a review of the ban, Google failed to reinstate his account. “Going to the press” appears to be the only recourse for many when going up against the faceless behemoth that is Google, these days.

As for the “crime” in question, it’s yet another case of guilty by association. That somehow everything on The Pirate Bay or Demonoid must be pirated, that even the technology itself is tainted somehow (leading Google to block tame keywords like “torrent” from their auto-complete and instant search features). It’s the kind of lazy solution to big problems we’re used to seeing in the Internet era though.

With Panama going all copyright crazy last week, this week, it’s Japan’s turn. To be fair, Japan had announced their plans some time ago, but it only went into effect this month. 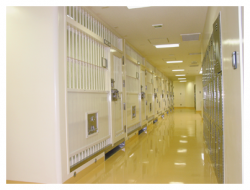 Downloading a single piece of pirated music could land you here, in a pristine looking Japanese prison

Unlike most copyright laws, which mainly target those that make available pirated content, Japan’s new laws target those on the receiving end too. Downloaders will now face fines of up to USD $25,000, in addition to a prison sentence of up to 2 years. For those that do upload, possible including BitTorrent downloaders, the fine is quintupled, as is the maximum prison sentence.

The only silver lining is that YouTube watchers may continue on as they were without having to do some forward planning and learn how to make toothbrush shivs (although I suspect Japanese prions are just as orderly as the rest of their society, for this little accessory not to be needed). Viewing infringing videos on YouTube or other streaming sites won’t be subject to these new harsh laws, as these are not counted as “downloads” (although whether the download cache used by your browser count as downloads or not is unclear, as it using a YouTube downloader tool – I suspect the former is fine, the latter probably not).

It won’t come as a surprise to our regular readers that the main driver behind these new changes was Japan’s equivalent of their RIAA, the RIAJ. And it probably won’t surprise you at all to know that the RIAJ’s current chairman is also the current chief executive of Sony Music Entertainment Japan. This folks is what happens when you let companies like Sony decide what copyright law should be like.

Which nearly was the case when SOPA/PIPA were still viable options, and may very well have been the case this week when SOPA II was passed into law. We’ll never know!

Nearly bed time, daylight savings robbed me of an hour of sleep today (boo!), so gotta adjust quickly. See you next week.

This entry was posted on Sunday, October 7th, 2012 at 11:31 pm and is filed under Copyright, News Roundup. You can follow any responses to this entry through the RSS 2.0 feed. Both comments and pings are currently closed.