Hope you’ve been enjoying the Olympics. Hasn’t been such a great one for those watching here in down under though, don’t know what’s wrong, but you know *something* is definitely wrong when New Zealand manages to get more gold than you do. I haven’t really been watching though, not really my thing as I’ve mentioned before. Too much commitment given the time differences, and I’ve got to get my body ready for a grueling season of English football watching once the Olympics are finished.

Without further ado, whatever this “ado” substance is, let’s get started with the weekly news roundup.

Much is made of the impact the Internet piracy has had on the music industry, the creative industry that is perhaps suffering the most from the “piracy scourge”, but it appears the music industry has been keeping a big secret from everyone: that online downloads do not appear to be the major source of pirated music! 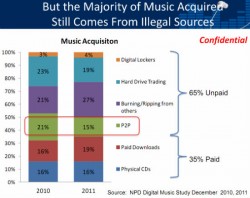 Online piracy is not the main source of illegal music files, according to research referenced by the RIAA

In fact, 70% of all pirated music are sourced from offline methods, according to newly leaked data from NPD courtesy of an RIAA report. And despite all the hoopla surrounding the closure of Megaupload, all digital lockers combined only contributed to 6% of illegal music sources. Instead, traditional CD ripping/burning and hard-drive trading still rule the roost when it comes to illegal music sharing. Of course, music found in traded hard-drives may have come from online source in the first place, but it appears most people’s first port of call for pirated music is their friends and families, not the Internet.

This set of data was marked confidential, and probably for good reason. If the public were made aware the actual contributions online piracy made to the pirated music scene, they might label the industry’s efforts against online music piracy as disproportional and inappropriate, and far from the rise of the Internet piracy being the downfall of the industry, there might be other factors that are in play. It’s almost as if the industry is using Internet piracy as a catch-all excuse for all of their woes, but I’m sure those in the music business have more class and honor than that.

One of the most disproportional responses to the online piracy problem has been the introduction of “graduated response”, or more commonly known as “three-strikes”, regimes – the most notorious one being the French “Hadopi” regime. Hadopi was a pet project for former President Sarkozy, but the newly elected socialist government of France appears to be less keen to continue on with the program. New cultural minister Aurelie Filipetti says Hadopi is too expensive (12 million euros per year) for the results it has obtained so far (still awaiting the first actual disconnection I believe, with 340 out of the millions of monitored users awaiting “sentencing” after being caught out for 3 times), and that it has failed in its goal to help promote legal alternatives.

And even if Hadopi had produced bannings, Filipetti says that this kind of punishment appears to be “disproportionate” compared to the seriousness of the crime.

I firmly believe the success of programs like Hadopi should to be judged not on how many people it bans or even how many people have stopped pirating because of it – it should only be judged on the basis of whether it has helped to increase revenue for the creative industries. If revenue has not increased as a result of three-strikes and other anti-piracy measures, then these measures have no real value other than being an affront to personal privacy. The failure of these programs to produce the required financial gains will also poke serious holes in the industry’s figures regarding losses due to piracy, and it would prove that not all acts of piracy would have otherwise generated a sale had piracy been prevented. 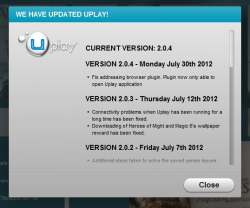 Users are advised to updated Uplay to version 2.0.4 or newer, to prevent Ubisoft’s infamous DRM and online platform from acting like a rootkit

Another week, another Ubi DRM controversy. Following the Steam Summer Sale disaster a few weeks ago where Ubisoft’s Uplay online and DRM service failed to accommodate the surge in game buyers, this week, Uplay is caught up in its own Sony style rootkit scandal.

The Uplay installer comes with a browser plug-in that’s automatically installed. But when curious Google engineer and Ubisoft game buyer Tavis Ormandy examined the plug-in further, he found that the plug-in not only allowed Uplay games to be launched, it allowed *everything* to be launched from a browser window. This is bad news because this could allow, for example, malicious websites to use the plug-in to launch anything and effectively take control of your computer. Unintentionally, Uplay had become the very definition of a rootkit.

Ubisoft was quick to release an update that fixed this vulnerability, so if you have Uplay on your system, then you’re advised to update Uplay as soon as possible, and do it with your browser closed as to allow the update to occur For now, there have been no reports of actual damages of unauthorised access by hackers via the Uplay plug-in, but if there are, I’m sure lawsuits will be launched promptly.

A few weeks ago, I wrote about a new study which alleges a music industry led anti-innovation crusade against Internet start-ups following the legal victory against Napster. In the study, it is alleged that most of the money earned from successful lawsuits went on to fund other lawsuits, in a sort of Ponzi Scheme that ran and ran until the money expectedly ran out. Artists and rightsholders, those the music industry points to as the real victims of piracy, apparently saw little of the “loot”. It seems nothing much has changed when it comes to the modus operandi of the industry, as it’s been revealed this week that even in the event record labels manage to recover the damages they won from The Pirate Bay lawsuit (some half a million euros worth), they will again refuse to share it with the “real victims”.

Not that there’s anything to share yet or perhaps ever, as new legal documents state pretty clearly that authorities have had little success and little hope of ever recovering the full amount of damages, as unsurprisingly enough, the individuals named in the lawsuits had little asset to seize (so much for the financial gain angle that Big Content says is behind most piracy operations).

If any money is recovered, the legal document says seized funds will be put to use to sue others, just like in the post Napster days. The difference being that, thanks to the industry’s efforts, piracy has become much more resilient than in the days of Napster or even LimeWire. The good news for the industry (sort of) is that legal downloads are also more prevalent. Although due to the industry’s obsession with piracy and their anti-innovation crusade, the lack of investment in innovation and forward thinking has allowed an opening for tech companies like Apple and Amazon to come in and take a huge chunk of the distribution cash cow.

And it seems to very same trend is being repeated with the movie industry (I guess no lessons were learnt).

The major studio’s beloved Blu-ray format continues to grow solidly, even with the holiday release season, which traditionally provides a big jolt to spur growth in market share, still yet to arrive. Even with Blu-ray movie prices continuing to drop, revenue has also been increasing, suggesting unit sales are up significantly. Some of Blu-ray’s growth has come at the expense of DVDs, as expected, but it appears that digital distribution is the main reason why DVD revenue continues to fall, and digital has been the real success story of the last couple of years.

With more and more titles being added every couple of weeks, Amazon Prime Instant Video is fast becoming a major player in the subscription streaming scene currently dominated by Netflix – both there’s plenty for everyone it seems – revenue are up 430% in a year!

New figures released by DEG, The Digital Entertainment Group, shows remarkable growth for all things digital. While revenue from transactional VOD services (where each request for a video is a separate payment/transaction – basically services like Vudu and the non Prime version of Amazon Instant Video) was only up modestly, some 11.6% (comparable to the rise in Blu-ray spending of 13.3%), the real growth has been in subscription VOD services like Netflix (and the Prime version of Amazon Instant Video).

An amazing 430% growth was recorded, made more amazing by the fact that this isn’t just some paper growth, but actual revenue exceeded $1.1 billion just for the first 6 month of 2012. Subscription VOD now accounts for 13% of all home video spending!

Actual Blu-ray revenue wasn’t made available by DEG (only that total physical disc spending was $3.7 billion), but data from other sources such as Home Media Research puts Blu-ray spending at just under $892 million for the first 25 weeks of the year. This means that in all likelihood, spending on subscription VOD services have now overtaken Blu-ray spending for the first time ever (this time last year, subscription VOD spending was only $208 million).

Not that I want to make this somewhat apples and oranges comparison – both delivery platforms are aimed at quite different demographics, and at the moment (due to lack of high quality HD content on streaming services), neither are really competing with each other. But once ultra speed broadband services, such as the recently priced Google Fiber are more prevalent, this could change again. For me, VOD streaming is a game changer, much more so than Blu-ray. It seems subscription VOD has the ability to not only cannibalize DVDs, but possibly rental too, and if the bandwidth issue can be solved, it can take on Blu-ray as well.

Here in Australia, the government is investing in the next-generation fibre broadband for 93% of all premises, providing up to 100 Mbps residential services at first with the capability of supporting Google Fibre like 1 Gbps speeds in the near future. It’s a fantastic and visionary project, but unfortunately, political games will most likely see the project scrapped before it’s completely finished. But in the off chance that it is completed, the ability for most homes in Australia to stream one or more Blu-ray quality streams without saturating the entire connection would most likely see the convenience of streaming win over the humble optical disc. One can dream, at least.

Speaking of dreaming, it’s fast approaching midnight and it’s probably time to call it a day on this edition of the WNR. Hope you enjoyed reading it. See you next week.

This entry was posted on Sunday, August 5th, 2012 at 11:58 pm and is filed under Copyright, Gaming, High Definition (Blu-ray/HD DVD/4K), News Roundup, Video Technology. You can follow any responses to this entry through the RSS 2.0 feed. Both comments and pings are currently closed.