I know I’ve been late with the WNR before, but never a whole day (maybe not strictly true). Sometimes life gets into the way of work, and for the few times when it’s actually good things interfering, then a little interruption to work here and there can be well worth it. This was one of those times, so I hope you’ll forgive me. Besides, by the time you get this, it might still very well be Sunday wherever you are, so hopefully it will still be the right day, even if it is the wrong time. Not a lot of news to actually go through this week to be honest, but we’ll make do as usual.

In copyright news, we have a couple (and using the more stricter definition of the term ‘couple’) of follow-ups to recent major stories I’ve been covering in this very section.

The Dutch ban on The Pirate Bay, while starting in February, has gained more recent attention due to a similar ban coming into effect in the UK, as well as the attention from the “IP switching” game TPB have been playing recently with the Dutch anti-piracy group, BREIN. But this week, one of the major ISPs participating in the ban has released data that questions the effectiveness of the block. Instead of making BitTorrent traffic decrease after the ban of The Pirate Bay in February, BitTorrent traffic has actually increased!

BitTorrent traffic since the Pirate Bay ban in the Netherlands (red line) does not seem to have decreased, despite 90% of the population now blocked from accessing the world’s largest BitTorrent indexer

ISP XS4All theorizes that the extra publicity the ban received may have actually help drive more traffic to The Pirate Bay and to other BitTorrent websites. For people that had relied on The Pirate Bay, it’s likely they’ve simply started using one of the hundreds of other BitTorrent indexers instead. And with the increasing use of magnet links, there’s a lesser need these days to have well run indexers that always have working .torrent downloads, which then allows more “competing” websites to be set up with lower technical requirements. All of this, and the numerous web proxies that still allow people easy access to the TPB, means the ban has little, if any, effect on torrent downloads. Of course, without looking at past trends, it’s hard to come to any firm conclusions about the data (for example, while BitTorrent downloads are still growing, perhaps it has slowed down thank to the ban – without looking at historical data, one cannot rule out this conclusion).

XS4All suggests that, instead of focusing on preventing people from downloading via technical means, the better solution is to offer them legitimate services that are just as enticing. You won’t get an argument from me about this, um, argument, but this is already kind of happening naturally via services like Netflix (more on that later).

The Megaupload affair took a strange turn this week when owner of the defunct file hosting website Kim DotCom claimed that Vice President Joe Biden was the key man behind the Megaupload shutdown. The allegations surrounds a meeting which took place between the vice president and members of the MPAA, at which DotCom alleges (citing a “credible source”) that the Megaupload shutdown was one a topic of discussion – a suggestion that has since been shot down by the MPAA. So far, no evidence has been released by DotCom which backs up his claim, so based on what we know currently, it’s unlikely Biden was so deeply involved with the whole affair. This isn’t to say that Biden would not have been a big supporter of the takedown had the matter been discussed – Biden has always been known for his support for the copyright lobby.

There were also some grumblings about the timing of the Megaupload raid, happening just days after the defeat of SOPA/PIPA by the Interwebs. Some suggest that this was revenge for the failure of the legislations, or that it was a way for the administration to appear to be still strong on copyright, despite the White House’s wavering support for SOPA/PIPA towards the end. But this fails to take into account the time between petitioning for a warrant (even if it turned out to be invalid later on), and executing the search – the indictments against Megaupload were actually filed weeks before the planned Internet-wide protest against SOPA/PIPA. And an investigation like this would most likely have taken years, not weeks, so any direct links between SOPA/PIPA and the Megaupload raid would be tenuous at most.

Going back to the earlier mentioned idea that legitimate services can compete effectively with piracy, we have the news this week that over 1 billion hours of content had been viewed by subscribers of Netflix’s net based streaming service in just one month.

This statistic comes from the usage stats for June, and means that each Netflix subscriber watched around 40 hours of streamed content for that month, or 80 minutes per day. That may not sound like a lot compared to normal TV, disc and cable viewing habits, but when you compare that to say your typical movie or TV pirate, then 80 minutes per day (which would be 2 “hour long” episodes with the ads removed) does seem quite significant. And this matches the fact that Netflix’s bandwidth usage, in the US at least, has grown to become much much greater than that of say BitTorrent, based on recent statistics. But due to the lack of unique and really new content, right now, I think Netflix is more of a complementary service to piracy, and a really competing one, if I had to be totally honest.

But with Netflix trying to bring more exclusive content to their network, including the highly anticipated return of Arrested Development, this particular viewing record could be easily broken again. It seems that, once again, the tech industry has stepped up to the challenge of giving people what they want, while the content industry lags behind and will ultimately be the losers (again) as they obsess over things like piracy and DRM.

The next story is probably better located in the Copyright section, but it also holds great significance to me from a gaming (and nostalgia) point of view, so this is where it goes.

The Leisure Suit Larry games series’s protagonist, Larry Laffer, is coming back to a PC or a mobile device near you. The leisure suit wearing, socially awkward, sex obsessed and hair challenged Larry brings back great memories for me during my teenage years, when the Larry games were a great time occupier. The news that a remake in on the way is awesome, even more so because it’s being done via crowd funding with a series of hilarious rewards, but even more awesomer because the creator of the games, the legendary Al Lowe, also hates DRM with a passion. 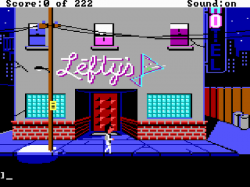 The original Larry game in all its EGA glory

Going one step further than even myself, Lowe refuses to buy anything with DRM (so not a fan of Diablo 3 then), and has been trying to avoid DRM ever since his first involvement with it in 1982. Not that Lowe condones piracy – his Larry games were so pirated that more more hint books for the games were sold than the actual games themselves – but from a pragmatic point of view, he just doesn’t think DRM does anything other than “hassle people who paid for the product”. DRM is about as useful as pocket lint is in an adventure game.

I for one can’t wait for pay for the remake, especially knowing I won’t be hassled for doing the right thing. Plus free pocket lint!

And on that note, we reach the end of another, and very very late, WNR. See you next week.

This entry was posted on Monday, July 9th, 2012 at 2:03 pm and is filed under Copyright, Gaming, News Roundup, Video Technology. You can follow any responses to this entry through the RSS 2.0 feed. Both comments and pings are currently closed.