Welcome to another edition of our annual Blu-ray sales analysis. Since our last analysis, we’ve had the milestone releases of Star Wars (always an important milestone for any video format), WB finally putting us out of our misery by releasing the Extended cut of Lord of the Rings and the conclusion of the Harry Potter saga. With Internet based streaming more popular than ever, and with home video revenue stabilizing after a turbulent couple of years, it will be interesting to have a look at how Blu-ray has done this past year.

The data used in this analysis derives from our weekly updates, based on figures released by Home Media Magazine. Some of the historical figures you’ll see have also been adjusted, due to slight tweaking of the metrics used by HMM to create these sets of data, although the changes have been very subtle and does not change the bigger picture in any way.

We’ll structure this analysis in pretty much the same way as the last one, although there are a couple of new graphs introduced in this analysis, focusing on actual raw revenue figures for Blu-ray.

The first set of graphs show Blu-ray market share through the four year period that I have tracked them, with the release milestones pointed out.

A graph that’s always getting wider, here we can see the 4 year period in which Blu-ray market share has been tracked. Market share is defined as the percentage of sales belonging to Blu-ray compared to all discs sales (which includes both Blu-ray and DVD). So for example, the Blu-ray market share figure as of 21th April 2012 is 26.08%, it means that this percentage of all disc sales belonged to the Blu-ray format (and inversely, this suggests DVD market share is at 73.92%). The last of these above 4 distinct graphs is the last 52 weeks period that this analysis will be talking about. One thing you’ll notice about these set of graphs, compared to the same set last year, is the new vertical scale being used – this is to take into account a new record for Blu-ray market share, set in the weeks following the release of Star Wars and during the week that The Lion King was released. The record now stands at 40.22%, up from the 28% that was set in the last 52 week period (by another Disney release, Beauty and the Beast – of course, both Disney releases inject a kind of performance enhanced doping into the Blu-ray stats, as these were exclusively released as Blu-ray combos and all sales were credited to Blu-ray, even though the DVD version was included in the package). What this graph shows is that the performance of Blu-ray market share is still very much dependent on specific releases, with popular catalog releases such as Star Wars and the Disney classic often being better for market share, than say major hits (with the exceptions being the kind of movie Blu-ray is made for: action, Sci-Fi and anything that benefits from the improved visuals and aurals). 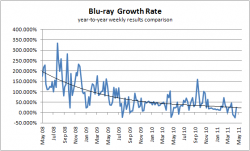 The upwards trajectory of Blu-ray market share is pretty evident in the first graph above, but the slowing down of the growth is also pretty evident in the second graph. Last year this time, the trend graph stopped at just above 20%, while a year later, it stops just above 25%. The addition of an annual addition of 5% to the market share has been repeated for the last 3 years already, with a slight slowdown, so chances are, we’ll be looking at Blu-ray at an average of closer to 30% this time next year. The lack of really enticing new releases in the last couple of month hasn’t helped market share growth, and growth was always going to slow as Blu-ray market share approaches the magic 50% mark (when passed, it will signal Blu-ray’s “victory” over DVD as the dominant home video format).

Below is a new graph I’ve introduced to this analysis, and it shows Blu-ray growth, but for raw revenue, rather than market share. 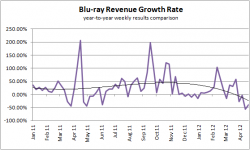 With less data being available than the equivalent graph for Blu-ray market share, the trend here is harder to see, and more volatile. But revenue is always a bit more volatile, as you can see the violent spikes indicate the a major release milestone for the format. The effect of the recent drought of A-list releases can be seen quite clearly towards the end of the above graph, as revenue growth drops below 0% (ie. a revenue decline). As a comparison, revenue growth for the first 16 weeks of 2011 averaged 33.24%, while for the same period in 2012, it only averaged 14.45%.

The last two set of graphs shows a comparison of weekly market share figures with the same figure from a year ago, and the same comparison but with revenue figures. 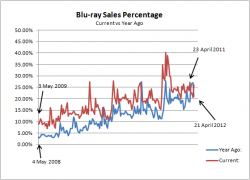 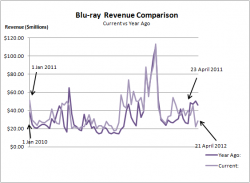 The slowing growth of Blu-ray shows up in the above graphs as the gap between the same weeks, a year apart, shrinks, and even reverses, depending on the calibre of the release in the two compared weeks. What is interesting is that the revenue graph shows the seasonal nature of home video revenue, with the holiday period having a “tent-pole” effect for the rest of the year. The difference between the top market share graph and the bottom revenue graph (where growth appears a bit more evident with market share than with revenue) is due to the fact that DVD revenue has shrunk during the same period, which has allowed Blu-ray market share to rise, without needing a similar rise in revenue terms. The decline in DVD, therefore, is not just solely due to the emergence of Blu-ray, but also other external factors (mostly Internet based digital distribution).

The conclusion is therefore very expected. Blu-ray revenue and market share continues to grow steadily, albeit at a slowing pace, but it will be the calibre of releases that will determine when Blu-ray will take the next step forwards towards becoming the dominant home video disc format. 2011 was a relatively weak year at the box office (and hence, the late 2011 and early 2012 releases being somewhat average), but 2012 already looks like a bumper year for movies thanks to the likes of The Hunger Games, The Avenger, Prometheus, The Dark Knight Rises and the next Bond movie, Skyfall, it bodes well for the second half of 2012, and the start of 2013, for Blu-ray.

This entry was posted on Wednesday, May 9th, 2012 at 7:04 pm and is filed under DVD, High Definition (Blu-ray/HD DVD/4K). You can follow any responses to this entry through the RSS 2.0 feed. Both comments and pings are currently closed.