It’s been just a bit over a year since the last “Blu-ray: The State of Play” article, and so it’s time to have a look again at how Blu-ray has performed since then, in what are still difficult economic conditions, and in a period where, particularly in the last few months, where there has been a dearth of new, hit releases.

Like the last article, the statistic that this “analysis” focuses on will be the market share figure. This figure tells us what percentage of disc sales belong to the Blu-ray format, and can be used effectively to gouge the growth of Blu-ray, even if general market conditions are not ideal.

The figures come from Home Media Magazine’s published data, which I have been analysing weekly, and because the calculation metric has been modified during the year, some of the graphs may appear different to what was published last year, but the differences are not significant enough to have changed the big picture.

The first set of graphs show Blu-ray market share through the three year period that I have tracked them, with the release milestones pointed out.

Just by looking at the graphs, you can see that Blu-ray market share has indeed grown. However, from looking at the number of milestone releases, the last 12 month has produced fewer such titles than the preceding 12 month. For one, there’s no Avatar, which still sets the benchmark when it comes to Blu-ray releases, with only Harry Potter and the Deathly Hallows Part 1 coming close this year. But even with fewer milestones, the bar has already been raised by the 2009/2010 performance, where back then, apart from Avatar, there was only one week that managed to break the 18% market share mark, whereas about half of the weeks were above 18% than were below it in 2010/2011. Also interesting was that quite a large percentage of milestone releases were from Disney, some titles such as Beauty and the Beast, and Bambi benefited from being time limited Blu-ray exclusives. And pretty much all of this past year’s milestone releases were combo releases (combo releases, for the benefit of the stats, are counted only as Blu-ray releases). 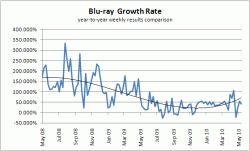 The first graph shows the fairly steady upwards trajectory of market share growth, which a slight dip in growth during the middle of 2010, but picking up again towards the end. The second graph shows this more clearly, and shows growth slowing down and picking up again (but seasonal factors probably account for this). But you cannot escape the fact that three years ago, Blu-ray market share was at 5%, and it is now above 20%.

The last graph below shows a comparison of weekly market share figures with the same figure from a year ago, with 2 year’s worth of comparisons based on 3 years of data. 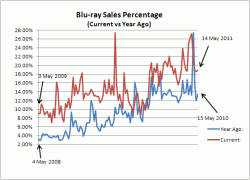 Unlike the same comparison I did last year, there were a few weeks in the last 12 month in which the week’s Blu-ray market share actually shrank compared to a year ago. This is largely to do with the timing of new releases, but overall, most weeks showed growth.

While we’re not specifically looking at revenue figures, which are much more volatile as it largely depends on the box office of new releases, we can still take a look at the first part of 2011, and how it compared to the same period in 2010. Including the period last year where Avatar was released, Blu-ray revenue averaged $29.21m. For the same period this year, it’s $32.54m. Not quite that impressive, but considering the overall drop in disc revenue and the poorer box office of the new releases this year compared to the last, Blu-ray is not only holding up, it’s growing (market share for the same period was 20.26% on average, compared to 14.89% a year ago). Highlighting the volatility of using revenue figures, percentage growth in this period ranged from 205% in one week, to a decline of 29.41% in the week immediately after … again, confirming that using market share figures yield a more consistent comparison.

So in summary, Blu-ray is still growing, albeit at a slower pace than previously, and raw revenue has not increased significantly, although that’s largely due to the calibre of new releases.

This entry was posted on Friday, May 27th, 2011 at 5:32 pm and is filed under High Definition (Blu-ray/HD DVD/4K). You can follow any responses to this entry through the RSS 2.0 feed. Both comments and pings are currently closed.