It’s been a while since I’ve started tracking the Blu-ray sales stats, posting weekly updates in this forum thread. But a milestone has been recently passed, in that it is now two years since I started posting stats, and so, there’s now just enough data to do a proper full year on year comparison. And with the release of Avatar last week, the biggest Blu-ray title ever, I thought that this would be a great time to update this blog post series (previous entry here), along with the updated graphs that will reveal very interesting trends about Blu-ray sales.

There are lots of Blu-ray stats available, but the one set of stats that I shall focus on will be the Blu-ray market share stats, or otherwise referred to as the weekly sales percentage. Please note that these are weekly stats (as opposed to “all time stats”), so they will go up and down depending on what’s been released during the week. Revenue stats can be distorted by big releases (like Avatar!), or seasonal trends, but the market share percentage tells us how Blu-ray is doing in relation to its biggest competitor, DVDs.

The first set of graphs points out the Blu-ray release milestones, and how they’ve influenced market share. It also allows one to see how well each major release did relative to others. The two graphs below are split by two time periods, the first graph plots data from May 2008 to April 2009, and second plots from May 2009 to the present – both graphs use the same vertical and horizontal scale, so you can compared them side by side more easily.

One thing that is notable straight away is that the number of major releases in the latter time period outnumbers that of the earlier, concentrated mainly during the holiday period of 2009, with titles like Star Trek, District 9 standing out. And of course, right at the end of the second graph, you have Avatar, which clearly is the biggest Blu-ray title of all time, although only narrowly beating District 9. Remember that this is market share, not revenue, although for both District 9 and Avatar, the market share peaks translated directly to revenue peaks as well ($60.60m versus $66.57m for Avatar). Also interesting to note was how disappointing the Lord of the Rings Trilogy Blu-ray was compared to other titles, especially so considering it was a Blu-ray exclusive and so market share should be even higher than normal – the week Snow White was released on Blu-ray might be indicative of what the LOTR release could have done market share wise if it hadn’t been so compromised. Note that the data we look at here are weekly market share numbers for all titles sold during the week. The weekly market share numbers for individual titles such are much higher, nearly 50% for Avatar for example. It’s certainly true that many titles approach parity with DVDs, or even surpass it regularly these days, but the majority of Blu-ray titles still sell only in small numbers compared to DVDs (not surprising, given the huge DVD userbase), and so the overall weekly numbers are what’s been analysed here.

In terms of catalog releases, that is releases of older movies and shows on Blu-ray, Snow White and the recently released Toy Story 1/2, stand out. It is interesting to note that both releases from Disney were Blu-ray/DVD combos, and both were timed exclusives, meaning that the “DVD only” version are not available at the time the Blu-ray combo version is released. This means that DVD owners that want to buy the movie at that time will have to grab the combo version, and all combos count as Blu-ray sales, not DVD. This perhaps explains why Snow White seems to do better than titles like Watchmen and Transformers 2, and how Toy Story 1/2 managed to beat the market share for the week 2012 was released.

The other really noticeable trend is the  steadily rising Blu-ray market share. The graph below better demonstrates this trend.

To better compare the two time periods, the graph below makes the situation quite clear. 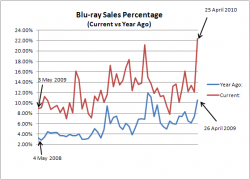 So the trend is clear. Blu-ray is growing steadily, and rapidly, with individual titles starting to beat DVDs in terms of market share during the first release week. However, with so many DVD players in people’s homes (including Blu-ray players, all of which are backwards compatible), and so many more movies on DVD, Blu-ray is not yet able to challenge DVD with the same level of success on all titles. When Blu-ray is able to do this, the growth trend should accelerate and it won’t be too long before Blu-ray becomes the dominant home video format.

This entry was posted on Wednesday, May 5th, 2010 at 5:31 pm and is filed under High Definition (Blu-ray/HD DVD/4K). You can follow any responses to this entry through the RSS 2.0 feed. Both comments and pings are currently closed.