December 8 Update: I have updated this article with new data up to November 30. The graphs and analysis have also been updated to take into account the Home Media Magazine change of calculation model starting from April 26, 2009, by recalculating the figures before this date to suit the new model. This allows for a much more accurate comparison than what was previously published.

So Blu-ray has been released for some time now. We’ve all read the news stories about how well, or how badly, it is doing, depending on your source, but what is the real “state of play” when it comes to Blu-ray. This feature, through using Nielsen VideoScan data that I’ve compiled weekly now for more than a year, aims to shed some light, and at the very least give you the data so you can decide for yourself on the state of  Blu-ray.

You may remember that I wrote a similar feature around the same time last year. It might be interesting to read that again to find out just how right, or wrong, I’ve been before deciding whether to take this update more seriously, or not.

As mentioned above, I’ve been posting and analyzing the weekly Blu-ray sales stats since May 2008. These weekly stats are provided by Nielsen and published in the free digital edition of Home Media Magazine.

Basing an analysis on this figure is not without problems, the major one being that since Blu-ray is more expensive than DVD, its revenue will be higher per title than that of DVD and the revenue percentage figure is affected by this. And as Blu-ray prices drop, its revenue drops, even if the number of titles sold remains the same. The same may apply to DVDs, but it’s at a lesser extent as DVD is a more established format with less price fluctuations (Blu-ray being new is more likely to have price drops, and larger ones at the beginning).

Here’s an exaggerated example to illustrate this point. Let say the DVD version of a movie costs $1 each and it sold 900,000 copies, and if the Blu-ray version of the same movie was $10 each and it only sold 10,000 copies, then Blu-ray would have a revenue percentage of 10%, despite the number of Blu-ray sales being only 1.1% of DVD sales. And then a year later, with the DVD version still selling 900,000 copies at $1 each, but the Blu-ray version is now only $5 and selling 20,000 copies, then the revenue percentage is still only 10%, despite the Blu-ray version now selling twice as many copies. In real life, the difference in pricing is not that dramatic, and both Blu-ray and DVD prices will decrease, but perhaps with Blu-ray decreasing a bit more than DVD.

There is also another very important issue with the data when it relates to comparing 2008 and 2009 stats. The source of the stats, Home Media Magazine, changed their calculation method between the two periods (in April 2009, actually) and as such, it’s not comparing apples to apples in a real sense. The discrepancy is particularly bad for the last few weeks of 2008, and it has to do with changing the ratio of sales from Wal-Mart. The effect is that Blu-ray sales were over represented and DVD sales under represented in 2008, particularly in the last 6 weeks (although this period is not covered by this analysis). From the beginning of 2009 to April 19 2009, only the DVD figures were under reported, based on the new model used from April 26 onwards. Luckily, updated data is available for the period before April 26, 2009, so that both sets of figures can use the same calculation model. The analysis and graphs below is therefore using the figures that have been calculated using the *same* calculation method, and so it is comparing apples to apples. You won’t find the same stats in the forum thread that I usually posts stats in, since it would be too much work to update all the previous posts, but I might do so at some stage.

The best set of figures to base any analysis on would be the percentage of titles sold, rather than a percentage of revenue, but I do not have access to this information for all titles, only for the top 20. So please take all of this into account when looking at the figures.

First of all, let’s take a look at a graph showing the weekly Blu-ray sales percentage from when I first started collecting the data (4th May 2008), to the most recent set (27th September 2009) – click on the image below to see a larger version: 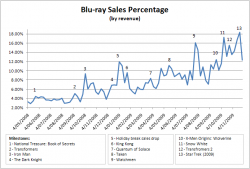 The immediate conclusion to make is that Blu-ray has made revenue increases over the last year and a bit, and since Blu-ray prices have dropped and hence meaning less revenue per disc, you can bet that the number of titles sold has increased even further than what the above graph indicates.

On the graph, I’ve noted several key milestones for the format, basically the weeks in which major titles were released. Some of the earlier milestones, like the release of I Am Legend, aren’t shown on the graph since it was released earlier than when I had access to the stats. Iron Man was a major release for the format, as you can see from the graph, it was unbeaten as a first week release until just recently, by Watchmen. To talk about important titles for the format, then The Dark Knight cannot be ignored, but as you can see from the above graph, it was relatively disappointing for Blu-ray for a first week release. This was because that it was such a hit title, that even the DVD version sold in huge quantities, thus diluting the Blu-ray percentage. This is why Iron Man was able to beat The Dark Knight, despite the latter being much more popular (or perhaps I should say, “because the latter was much more popular, even amongst DVD owners”).

December 8 Update: The graph above has now been updated with more stats up to November 29, 2009, including the record breaking Star Trek release and the best seller prior to that, Transformers: Revenge of the Fallen.

And it’s not just new releases that can give Blu-ray a weekly boost – catalogue titles, including ones that had already been released and practically given away towards the end on HD DVD like Transformers or King Kong, can still command huge sales (King Kong actually beat The Dark Knight in terms of the Blu-ray sales percentage). And even when there are no releases, Blu-ray can perform, an example is point 5 on the graph, which was occurred during the New Years break. The reason is that when there are fewer shoppers, those that are out there buying are often the more “fanatical” kind, early adopters, home theater enthusiasts and such, and they prefer Blu-ray over DVD. And every new release on Blu-ray, whether it’s a new movie or a classic, is “new” to Blu-ray owners, and such almost everything can be considered a new release and the sales figures roughly reflect this.

In terms of growth, the revenue growth as shown on the graph doesn’t look quite that spectacular, the peak for Watchmen apart. There is good reason for this, and that’s largely down the missing data – we’re not yet at the peak sales period, which is right now until the end of the year. However, the 2008 data does include this period, and most of the peaks occurred during this period as well. Only when the 2009 peak period has passed, can we accurately compare “peak to peak” to see the real signs of growth. And as mentioned earlier, the lower Blu-ray prices resulted in a revenue drop on a per title basis, which is most likely larger than any similar revenue/title drops for DVD, and the graph above cannot accurately reflect this either. December 8 Update: With a couple of more weeks worth of data, including the weeks featuring some of the year’s biggest releases such as Up as well as the aforementioned Transformers 2 and Star Trek, the growth looks much more evident. There are still a couple of big releases for the rest of the year, including Terminator Salvation (which should do great on Blu-ray) and Harry Potter and the Half-Blood Prince, we might even see higher peaks, although I think it will be hard to top Star Trek. 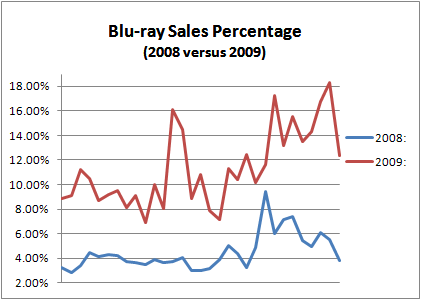 Blu-ray Sales Percentage: 2008 versus 2009 Comparison (May to November)

December 8 Update: Note the dip at the end of both lines is for the Black Friday sales, which traditionally favours DVDs more than Blu-rays, since we’re talking about $2 DVDs compared to $10 Blu-ray titles (for 2009’s Black Friday, these were the discounted prices). I will update again at the end of the year. Every month of 2009 so far has outsold the same month in 2008, that’s to be expected. There were more peaks for 2009 as well, with Blu-ray better able to take advantage of hit titles (and 2009 gaves us more titles that the average home theater enthusiast, movie fans and PS3 gamers – the core Blu-ray demographic – would arguably enjoy more). The average growth for each week’s dataset is 158.64%, in other words, on average, a week in 2009 meant a near 159% increase compared to the same week in 2008 (this is using 2008 data that’s been updated for the post April 2009 model). But “percentage increases” are not that indicative of real growth, because if only one Blu-ray movie was sold last week, and two was sold this week, then that’s a 100% increase in a week, which sounds like a lot, but is really isn’t. The actual increase in market share for Blu-ray is about 6.59% on average for the above time period, meaning that on average, Blu-ray market share for a week in 2009 is likely to be around 6.6% higher than the same week in 2008 (so if Blu-ray had 5% market share in week 30 of 2008, then week 30 of 2009 should have roughly 11.6% market share). This is not an insignificant increase, and as I will mention again, due to the drop in revenue per title that should be greater on Blu-ray than on DVD, this increase may actually be larger.

From observation, Blu-ray growth seems to be driven by individual titles. For example, the release of The Dark Knight might have helped to sell more Blu-ray players, or to make more people aware of Blu-ray, and as such, this lifts the sale of all other titles. With many “Blu-ray friendly” hits coming this holiday season (Star Trek, Terminator Salvation, Transformers 2, Harry Potter), the overall Blu-ray sales percentage should increase beyond the temporary rise offered by these titles. How much remains to be seen, and I’ll update this feature when it becomes clearer. Now that two of the four hits I mentioned just above have been released, the picture is clearer and Blu-ray’s market share is on a very healthy trajectory, especially from May 2009 onwards, and there are still two more big hits from the list to go.

This entry was posted on Saturday, October 17th, 2009 at 7:20 pm and is filed under High Definition (Blu-ray/HD DVD/4K). You can follow any responses to this entry through the RSS 2.0 feed. Both comments and pings are currently closed.