PowerDVD 9 was released a couple of days ago. I’m currently writing a full review for it, but I thought it would be nice to write a short (relatively speaking) “what’s news” post that lists the various new features of PowerDVD 9. Here’s a list of what’s new – they apply to all editions  of PowerDVD (Standard, Deluxe and Ultra):

A very egalitarian upgrade indeed, not where some new features are only limited to the more expensive editions. So let’s go through each of these headline items and see what they’re all about.

Corel WinDVD introduced something similar, called All2HD, in the last version of WinDVD. This is basically the DVD (or SD video) upscaler, and you have the option to change the sharpness setting to control how much the upscaling will look. Just like All2HD, this works very well and does not eat too much into the CPU usage side of things. There is a comparison screenshot below (click on the thumbnail to view it at full size) which shows pretty ‘clearly’ how TrueTheater HD works in improving the picture quality.

TrueTheater motion is equivalent of picture smoothing  systems on HDTVs that add additional frames to the picture to make motion more smoother. Basically it will convert 24 FPS to 72 FPS by displaying each frame 3 times, of course your display has to support 72 Hz mode for this to be effective.

PowerDVD Cinema Mode
This is an interesting new interface feature. Basically, this presents a new streamlined interface for PowerDVD, where most of the functions are hidden, and is more suited for home theater operation using a remote control (rather than the mouse/keyboard). Things like colour coded buttons corresponding to remote buttons for certain operations, more simplified menus and buttons, and these types of things (see screenshots below). Overall, it’s pretty effective, and at the very least, it gives you another interface option that looks a bit more stylish than the standard one. But the most important function of this feature is to better integrate PowerDVD with Windows Media Center, and this can then make Blu-ray playback a seamless part of WMC (WMC does not support Blu-ray by default, even in the upcoming Windows 7 version).

FancyView Navigation
This is another interface option, but instead of changing how PowerDVD looks, it changes how the DVD content looks. For example, when viewing a DVD, you can click on the “FancyView” chapter viewer to display a 3D chapter selector, even if the DVD in question is still using plain old static chapters. Although you could argue as to the point of all this, but it does make things a bit more interesting and something to show off to your friends if you’re using PowerDVD to drive your home theater setup. 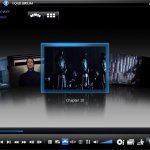 HDMI 1.3
And finally, but possibly the least exciting feature (or the most, depending on your sound setup) is HDMI 1.3 support. This means support for both video and 8 channel LPCM audio over the same HDMI cable, which means that if you are connecting your PC to your HDTV through your receiver with HDMI audio support, then you can get the best possible sound output. There is even bitstreaming support (transmission of undecoded bitstream for your receiver to handle the decoding), but this does require specific supported audio cards such as the Auzen X-Fi Home Theater HD card. It’s all now possible thanks to HDMI 1.3 support.

And so that’s the new features in a nutshell. As mentioned before, the full review will be up sometime next week I think, but things are looking pretty good so far with the new features ranging from nice to have to being absolutely essential.

P.S: It wouldn’t be a blog post without me plugging something, and this time it’s the new sister section of this blog (sisters because they both use WordPress), which is the Deals & Freebies section. It’s relevant to this particular post because there is actually a special offer on at the moment for PowerDVD 9. Buy any of the versions, including the upgrade versions from version 7 or 8 to 9, and you will get a $20 off voucher for electronic/computer online superstore TigerDirect.com, off your next $100 or more purchase. More information about this deal here.

This entry was posted on Saturday, March 7th, 2009 at 4:25 pm and is filed under Computing, High Definition (Blu-ray/HD DVD/4K). You can follow any responses to this entry through the RSS 2.0 feed. Both comments and pings are currently closed.