Hello again! Hope you’ve been having a nice week. Me? I’ve been catching up on Battlestar Galactica again, the new re-imagined series (also known as the RDM version, named after its creator and Star Trek alumni Ronald D. Moore – the relevance of this little factoid will be revealed later on). I often have stuff on in the background while doing some of the more tedious work for the site, and TV series with completed seasons that I’ve watched before are great in that they’re long and familiar, which means it won’t distract me from working (too much). If you’ve not seen the RDM BSG series, you really ought to give it a go, especially if you’re a fan of good sci-fi. It’s one of those milestone shows that forever changed sci-fi, and now every second sci-fi show tries to emulate its “grittiness” and serial format (including one particular season of Star Trek: Enterprise, if I can remember), as opposed to Star Trek’s spotless, episodic nature. It’s also one sexy, if still quite tame by HBO standard, show.

Anyway, enough babble, on to the news! 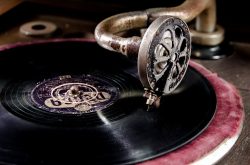 Before we get to the Star Trek stuff, there’s a bit of copyright good news (relatively speaking) coming out of Washington DC, at a time when good news out of that place is a rarer commodity than modesty from President Trump. For once, Congress, rights-holder groups and digital rights activists have all come together in support of a new copyright bill that could finally set a limit on the copyright term of old music. Really old music.

Having sailed through the US Senate, the Music Modernization Bill will finally start putting music published from 1923 into public domain, starting this year. Songs made before 1946 will all have a set 95 year term, while songs published between 1947 and 1956 would get a 110 year term. Songs published between 1957 and 1972 would all expire by 2067, meaning that will be the year Bill Withers’s ‘Lean On Me’ will fall into public domain. It’s a compromise for digital rights groups like Public Knowledge, which supported the bill, but it finally puts and end limit on copyright terms for songs that were increasingly looking that they were never going to fall into public domain.

Now all we need is something similar for movie and TV content. Can’t wait for a public domain Mickey Mouse to exist, and also can’t wait to see how freaked out Disney will be by it.

Speaking of a media giant being freaked out, CBS has decided to use the nuclear option (or an antimatter explosion equivalent) to take out a promising fan project that will finally allow all of us Trekkies and Trekkers to live out a fantasy – to walk the decks of the USS Enterprise-D. CBS has ordered the fan project Stage 9, which has meticulously recreated the illustrious ship using the Unreal Engine, complete with working controls (yes, even saucer seps!), sound effects and crew members, to shut down or face a legal version of a photon torpedo attack.

I’m sure the people behind Stage 9 would have made any changes that CBS would have requested, and even if CBS wanted them to pay for a license, I’m sure fans of the project would have loved to help. Unfortunately, CBS decided to not to play ball (or Parrises squares) with Stage 9, and us fans were left with no options, not even a paying one.

That last sentence wasn’t entirely correct. There is an option, one that’s obviously not legal now that CBS has stepped in. Downloads of the latest build of Stage 9 has been floating around Reddit and the usual torrent places, and lots of people are downloading. Not sure how long this will go on before the CBS take action on these links. A very sad state of affairs, if you ask me. Sadder than when Captain Picard opened the box containing “his” Ressikan Flute. Sadder than the end of “Lower Decks”.

And on that nerdy note, we come to the end of this WNR. Back to more fraking excellent BSG. See you next week!

This entry was posted on Sunday, September 30th, 2018 at 4:50 pm and is filed under Computing, Copyright, Gaming, Movies, News Roundup. You can follow any responses to this entry through the RSS 2.0 feed. Both comments and pings are currently closed.