Welcome to 2013. So another week without much going on, which is nice actually. Nice to be able to get a break and recharge the proverbial batteries ahead of a busy 2013. Let’s get started!

A new report from the University of Southern California (USC) says that Google and, to a lesser extent, Yahoo, are aiding and even profiting from web piracy by providing ads to the top piracy websites. In a study that collected information on which ad networks the top piracy websites used (top websites based, ironically, on data that Google releases as part of its anti-piracy transparency efforts), the study found that Google was the second most popular ad network being used by these websites. Yahoo came 6th.

Just because a webpage has a Google adcode, it does not mean the displayed ad is served by Google or that Google profits from it

Google came out immediately to criticize the study for over-simplifying how web advertising works. The report was apparently compiled by scraping ad-code from piracy websites, and Google rightly points out that the presence of an ad network’s ad-code on a page does not necessarily mean that the network’s own ads are being served via the ad-code. The data apparently also includes Google’s DoubleClick ad-codes, but DoubleClick’s role in providing advertising differs significantly from Google’s main publisher advertising platform, AdSense. DoubleClick For Publishers (DFP) merely provides the tools for website publishers to place ads on their websites – the actual ads could be served from any ad network (including Google’s own AdSense). Even AdSense delivers ads from third-party ad networks. So while the USC report may have counted all AdSense and DFP ad-codes as being “Google ads”, the actual money making ads that is delivered via AdSense and DFP could have come from any other ad network.

Similarly, Yahoo’s Right Media platform offers similar functionalities as DFP, and have also been counted as part of Yahoo’s ad network for the report.

From my own experience, both Google and Yahoo have fairly tough anti-piracy policies. They will often reject sites right away if they suspect something is not right, and they have been known the suspend and seize funds from publisher accounts, sometimes over-zealously.

And unlike a lot of other ad networks that have a more hands-on role in sourcing and placing ads, Google at the very least leaves much of the decision to advertisers. So targeting the likes of Google and Yahoo seems slightly unfair given that advertisers, some of them being Hollywood studios, can choose to have full control over what gets placed where. Perhaps a list of top 10 advertisers on pirates sites may be much more informative, than simply blaming the tools that is used to show these ads. What’s next? Name and shame the web browsers used to visit piracy websites?

The first DRM story of 2013, and who would have guessed that it involves Sony! Ever the pioneers, not so much in terms of consumer technology (unlike the likes of Apple, Google, Microsoft, Nintendo, Netflix …), but ever the innovator in DRM technology, Sony has come up with a new way to annoy gamers with a new DRM that uses RFID tags to prevent the usage of used games. 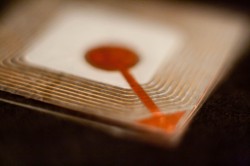 One of these RFID tags could be embedded into a Blu-ray disc, so that Sony can use it as a new form of anti used games DRM. Photo credit: JuditK @ Flickr, Creative Commons License

The same thing could be done via an Internet connection, but it seems Sony is thinking of offline ways to get its DRM into everything as well.

But this being a patent application means that it is just as likely to never see the light of day as an actual application, but you do have to give Sony credit in finding new and more annoying DRM.

Not that I want to give Sony ideas on how to make more money or anything, but if the real concern is that the second-hand games market is unregulated (ie. Sony and other game publishers don’t make $$$ every time a second hand game is sold), then why not create your own, regulated second-hand game trading environment? Preventing gamers from selling their old games is only going to reduce the budget of these gamers in terms of buying new games (and that won’t help anyone), so if the concern is that Sony and others aren’t getting a cut of the action, why not, you know, do something about it so you *can* get a cut of the action?

But this solution probably makes too much sense, is far too consumer friendly, and does not contain enough DRM goodness for Sony to ever consider something like it, probably.

That’s all for the week, the first of 2013. I suspect more will be forthcoming next week, what with the CES and all. So until then, have a great one!

This entry was posted on Sunday, January 6th, 2013 at 3:49 pm and is filed under Copyright, Gaming, News Roundup, PS3, PS4. You can follow any responses to this entry through the RSS 2.0 feed. Both comments and pings are currently closed.