Hello again. I don’t really talk much about politics in this blog, or at least nothing outside of our usual niche of copyright and piracy, but with all that’s going on in the U.S, and around the world, it just felt wrong to ignore what’s been happening. It’s clear now that there are people who’s sole aim is to divide us, to spread hate or to further their selfish agendas at the expense of everyone else, and they have chosen to attack anyone who stands in their way, people and organisations that attempt to hold them in check. These attack range from political dog whistles, to statements designed to seem mainstream (but have their roots deeply embedded from a place of hate), and actual physical attacks, which unfortunately, are becoming more common. This is not a debate about political correctness, or freedom of speech, but rather incitement, fear-mongering and irresponsible populist pandering. Words have power, especially used by those already in power, and they can be used to to incite hatred, just like they can also be used to inspire greatness – and when you hear these words being spoken on TV, or hastily posted to Twitter, it’s not hard to tell whether they’re being used to incite or to inspire. History will be the judge.

On to the rest of this (short) news roundup. 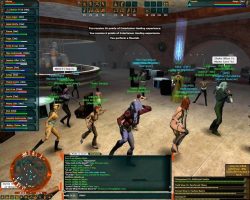 There are rarely positive news when it comes to copyright law, especially in the U.S, and that’s why when there is something positive, it should be highlighted. The U.S. Copyright Office has followed a recent trend of making common sense decisions when it comes to making exemptions to existing copyright law (well, to a degree that’s possible given the political and lobbying pressure in Washington) and they’ve just made more exemptions that are, well, common sense. They have just given consumers back their “right to repair”, even if it means breaking DRM to do so, given filmmakers the right to rip DVDs and Blu-rays for use in their own film projects, and most important of all, granted a copyright exemption for the archiving of abandoned online games.

What this means that it’s now possible for game preservationists to recreate the servers for long abandoned MMOs, bypass any DRM or security measures in the process, assuming they are able to convince rights-holders to give up the source code for the servers. It may already be too late for older games, even non online ones, in which lack of foresight means the permanent loss of digital code, but it’s better late than never. So in fifty year’s time, it might be possible to visit the Museum of Art and Digital Entertainment, for example, and play World of Warcraft or Star Trek Online long after the official servers have been retired.

To be fair, I still expect a lot, if not most, of the digital content that are being created to today to be lost forever at some point in the future. Even with Digital Digest, I’m sure I’ve already lost a lot of older content that I had backed up on obsolete media formats (damn you, Zip drive). Proprietary formats, copy protection and other barriers means preservation is a hard task at the simplest of times, and that’s not even taking account the sheer amount of data that is being created at all times, even as I type.

But also to be fair, a lot of that content is just sheer nonsense.

Speaking of nonsense, that’s the end of this rather short WNR. Yeah I know, a roundup should really consists more than just one news story. But what can you do (actually lots, but I was busy!). See you next week.

This entry was posted on Sunday, October 28th, 2018 at 4:37 pm and is filed under Copyright, Gaming, News Roundup. You can follow any responses to this entry through the RSS 2.0 feed. Both comments and pings are currently closed.